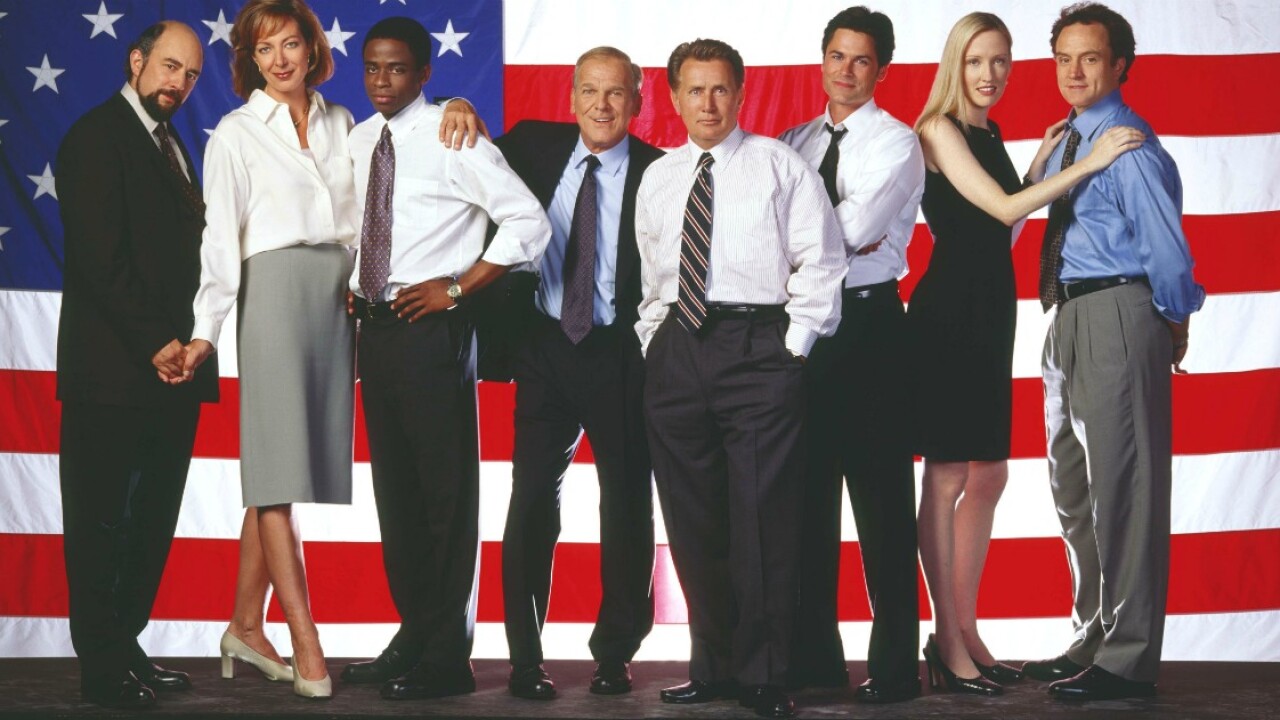 Aaron Sorkin could be earning royalties off the 2016 campaign.

Gaffes by politicians that conveniently help their cause? There, too, this year.

A soon-to-be nominee iffy at best about his running mate? That happened on the NBC drama as well.

The similarities are poised to cross into reality this weekend when most of the series’ cast members will campaign for Hillary Clinton in Ohio.

There’s a certain irony to this, as many series plotlines about the White House of fictional commander in chief, Bartlet (Martin Sheen), were based on events from Bill Clinton’s administration. “The West Wing” premiered with about 14 months left in Bill Clinton’s presidency, and a swath of his former aides worked on the show as writers and producers.

So in the already “West Wing”-tinged 2016 campaign, what’s next in made-for-television events? Five episodes offer clues.

Bartlet is depicted in the series as an exemplar of virtue, both in public and private realms. A Nobel Prize-winning economist and former New Hampshire governor, he earnestly wrestles with public policy decisions based largely on his progressive principles. Bartlet is a devout Catholic and father of three daughters seemingly without hint of personal scandal.

But he’s not infallible.

It’s revealed midway in the first season that Bartlet has been hiding a years-ago diagnosis of multiple sclerosis. And he had full complicity from his physician wife Abby (Stockard Channing), who delivered shots of a mitigating drug, betaseron.

The secret is so closely-held that the Bartlets initially keep it from the candidate/president’s close friend, Leo McGarry (John Spencer) — who convinced Bartlet to seek the White House in the first place. McGarry is eventually let in on it after the president collapses in the Oval Office. But the trio keeps White House senior staff members in the dark for more than a year.

A miniature version of this drama recently played out in the 2016 campaign, although over a considerably less serious medical issue for Clinton. Compared to Bartlet’s years-long conspiracy of silence over a potentially life-threatening condition, for only two days she neglected to inform the public about a common health concern, pneumonia, from which she quickly recovered, according to medical information provided by her campaign.

Clinton in September was slow to reveal the pneumonia diagnosis, after a spate of coughing fits during a speech and on her campaign plane. And she doesn’t appear to have informed many of her top aides about it. Her doctor revealed the candidate’s pneumonia diagnosis on the afternoon of Sunday, September 11, through her campaign. But that was two days late, and only after the Democratic nominee stumbled and exited a 9/11 commemoration ceremony early — in full public view.

Many people even inside the Clinton campaign did not know about the pneumonia diagnosis. An aide said that Clinton “thought she could push through this … she was feeling better” — until that Sunday morning.

“To just be grossly generalistic, you can put half of Trump supporters into what I call the basket of deplorables,” Clinton said. “Right? Racist, sexist, homophobic, xenophobic, Islamophobic, you name it.” Clinton then said some of these people were “irredeemable” and “not America.”

Predictable outrage soon followed from the Trump campaign and supporters. Clinton — kind of — walked it back.

“I regret saying ‘half’ — that was wrong,” she said in a statement in which she also vowed to call out “bigotry” in Trump’s campaign.

The episode seemed like the self-inflicted wound of Clinton’s political career. She insulted a broad swath of the electorate, and gave her opponents an opening to play victim of mean-spirited attacks.

But her “deplorables” jab at Trump voters had another effect — it put Trump and allies on the defense to show its campaign supporters weren’t racist.

In doing so, it stirred a lively — and ongoing — conversation about some of the more controversial elements of the Trump coalition. In other words, Clinton set the terms of argument — and potentially helped rally her Democratic base.

The incident called to mind a similar Bartlet “gaffe” made in the course of a heated presidential race, which ended up helping his cause.

In a 2002 episode, Bartlet is caught on camera “accidentally” questioning the intelligence of his GOP opponent, Florida Gov. Rob Ritchie. After touting his administration’s energy plan, he disparages his rival — a thinly-veiled George W. Bush stand-in — as a “.22 caliber mind in a .357 Magnum world.”

For days, the Bartlet White House is on the defensive for an unsportsmanlike insult at a campaign rival. But it turns out Bartlet’s blunder was anything but. The errant comment triggers waves of coverage about his rival’s smarts — or lack thereof — while raising awareness about the energy proposal.

“It didn’t turn out too bad at all,” White House Press Secretary C.J. Cregg (Allison Janney) muses to Bartlet in the episode’s closing scene. “In fact, the whole country’s talking about whether Ritchie’s smart enough to be president. And you didn’t take a hit, because it was an accident.”

When Trump entered the 2016 GOP primary race, he faced a wall of establishment-type pols — Marco Rubio, John Kasich and many more. He beat them all.

Jed Bartlet, too, was an outsider candidate who shocked the political establishment. He started out far behind Texas Sen. John Hoynes (Tim Matheson), but his populist message eventually overtook his Democratic rivals.

Bartlet at times shows existential angst over his place in the party firmament. Notably in the Season 2 finale “Two Cathedrals,” he ponders whether to run for re-election after a primetime news conference revealing his MS condition, and juggling several crises, foreign and domestic. In a dream sequence with his recently-deceased secretary, a big-sister-like figure for decades, Bartlet observes, “I’ve got a secret for you, Mrs. Landingham: I’ve never been the most popular guy in the Democratic Party.”

Trump, though, has shown no such self-reflection. He routinely boasts of beating out 16 GOP primary rivals. As Ms. Landingham predicted would happen for Bartlet and the Democrats, the Republican National Committee and party apparatus have rallied around Trump.

You can’t always get what you want

A recurring “West Wing” subplot depicts long-simmering tension between Bartlet and his vice president, the past primary rival. A more conservative Democrat, Hoynes was a one-time favorite for the party nod who ultimately lost to the upstart Granite State challenger.

Bartlet put Hoynes on the ticket out of necessity to win Southern states — a New England-Texas alliance reminiscent of John F. Kennedy tapping Lyndon Johnson as his running mate in 1960.

But it’s no love affair, either. In searching for an understudy, Trump over the summer reportedly narrowed his search to three finalists — Pence, New Jersey Gov. Chris Christie and former House Speaker Newt Gingrich. Trump finally went with Pence. But he was so unenthusiastic about it that the night before the campaign’s scheduled announcement he frantically called advisers and friends about how to reverse the decision.

By that time, Pence was already ensconced in a New York hotel room, with the full expectation that he would be announced as Trump’s choice. It was simply too late for a change. But a less-than-subtle signal about Trump’s feelings came the next day when he spent a full 30 minutes talking before letting his running mate have a few words at the microphone.

The Trump campaign rally theme song that then blared — “You Can’t Always Get What You Want” by The Rolling Stones — seemed particularly apt for the moment.

Clinton’s use of a private email server while secretary of state has led to a series of ongoing headaches in her 2016 campaign. While let off the hook by the FBI about whether she improperly dealt with classified material on an unprotected network, conservative critics are still on her case.

And one group, Judicial Watch, has drawn a measure of political blood. The group filed a Freedom of Information Act lawsuit against the State Department in 2015, and in August, it released 296 pages of emails from the Democratic presidential nominee — including 44 that Judicial Watch says were not previously handed over to the State Department by Clinton. The emails, many of which are heavily redacted, raise questions about the Clinton Foundation’s influence on the State Department and its relations during her tenure.

In one instance, top Clinton Foundation official Doug Band lobbied Clinton aides for a job for someone else in the State Department. In the email, Band tells Hillary Clinton’s former aides at the department — Cheryl Mills and Huma Abedin — that it is “important to take care of (redacted).” Band is reassured by Abedin that “Personnel has been sending him options.”

The revelations haven’t derailed Clinton’s campaign — but they weren’t helpful, either. And the documents recall an early “West Wing” story arc including a conservative legal group, “Freedom Watch,” which forces Bartlet administration senior staff members to testify in depositions about alleged White House drug use.

Even during “West Wing’s” original run, Freedom Watch looked familiar. The fictionalized conservative watchdog group was, not surprisingly, based on Judicial Watch. The real life group has a long history with the Clintons, having filed lawsuits over 1990s-era controversies like the Vince Foster suicide.