Bride’s dying dog sees his person down the aisle

“We had tons of adventures together,” she told CNN.

So when she learned her canine companion of 15 years was dying of a brain tumor, she was devastated.

As much as she wanted him to be with her forever, she didn’t want to extend his life in suffering.

“It had been four months of watching him deteriorate,” she said.

To have Charlie at her wedding in September to now-husband James Garvin was important to her. In the five years since she had met Garvin, Charlie had fit right in with Garvin and his sons.

“He (Gavin) grew to love him just as much as I did,” she said, “He (Charlie) was a symbol of the coming together of the family,” she said.

Charlie was active and playful during the hours before the wedding.

“He was playing with kids before,” photographer Jen Dziuvenis told CNN, “but the excitement and elevation was too much for him.”

So when it came time for Charlie to walk down the aisle, Katie Lloyd, the bride’s sister and maid of honor, stepped in. 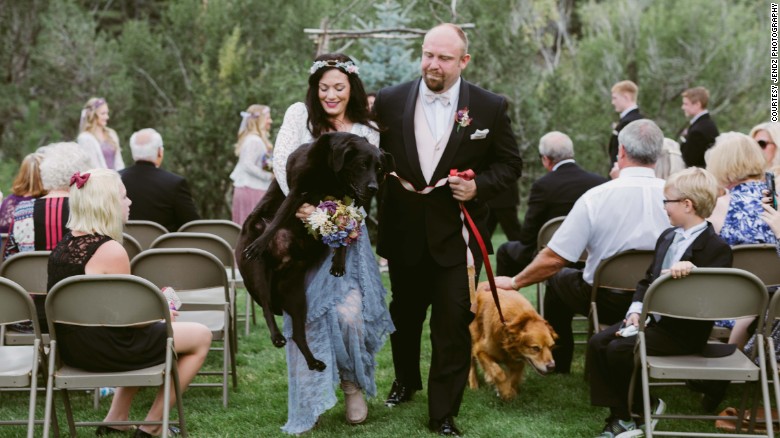 “The amazing human that she is, scooped him up and carried him” Dziuvenis said.

Lloyd, 38, carried the 80-pound Labrador mix down the aisle.

“James and I dropped to our knees and started crying,” she said.

Charlie died just eight days following the their wedding, surrounded by his loving family in front of a fireplace.

“It was a beautiful moment,” O’Connell said.

But Charlie didn’t leave without giving them the one last gift of his presence on a really special day. And pictures O’Connell says are “priceless.”

“It’s hard to look at them without crying every time,” she said.

This story was originally reported by CNN affiliate KCNC.