CHESTERFIELD COUNTY, Va. — Police released photos of the masked man who pepper sprayed a delivery driver outside MARTIN’s grocery store on Charter Colony Parkway in Chesterfield County.  The masked man got away with a bin filled with prescription medication during the September 7 crime.

The 12:25 p.m. robbery began when a silver Dodge van pulled up next to the delivery vehicle as the delivery driver unloaded his merchandise.

“A man stepped out of the van’s passenger side and sprayed pepper spray in the delivery driver’s face. While the victim was incapacitated by the spray, the suspect stole a storage tote containing prescription medication,” a Chesterfield Police spokesperson said. “The suspect got back into the passenger side of the van, which then fled the scene.”

The delivery driver was checked out by an EMT on scene and was OK. The stolen bin was recovered nearby, but the medication inside of it was gone, police said.

Police described the robber as a black male who was about 6 feet to 6 feet 2 inches tall and had a stocky build.

“He was wearing a dark-colored sweatshirt, tan cargo shorts, white gloves, a white dust/surgical mask, white sneakers and sunglasses,” police said. “The suspect vehicle is described as a silver Dodge van with black trim, no front license place and a rear license plate from Pennsylvania.” 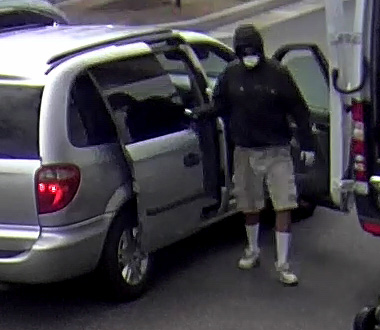