Usain Bolt: The greatest athlete of all time?

Who is Usain Bolt?

A showman. A superhuman. The greatest track and field athlete of all time.

The Jamaican cemented his place in Olympic history as he wrapped up his dream “Triple-Triple” in Brazil at Rio 2016 on Friday, winning all three sprint titles at three consecutive Games.

“What else can I do to prove to the world I am the greatest?” Bolt said after his 200-meter final win in Brazil. “I am trying to be one of the greatest. Be among Muhammad Ali and Pele. I hope after these Games I will be in that bracket.”

Following the relay, he repeated to the TV cameras: “I’m No. 1.” 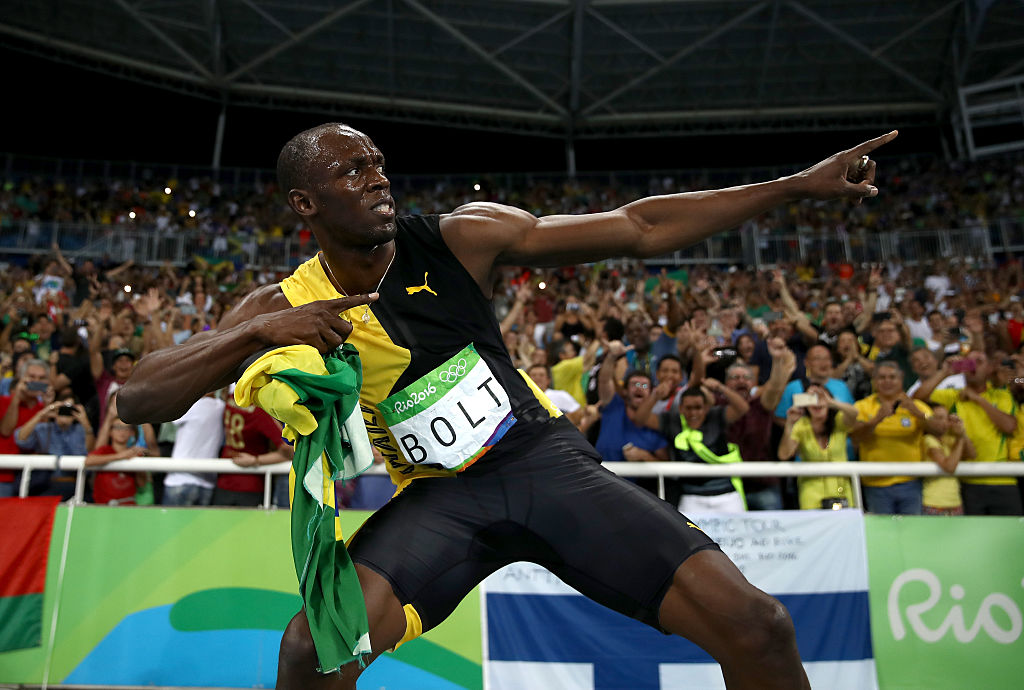 Bolt’s likely final Olympic race came just two days before his 30th birthday. It’s not mid-life crisis time, but a transition into a new decade is a good time for reflection — even for us mere mortals.

Looking back on his life story, Bolt can reflect on a peerless golden run which stretches back to the Beijing Games in 2008.

The statuesque, unusually slender sprinter blitzed to his first trio of sprint crowns in world-record time. Inside the Bird Nest Stadium, a new superstar was born.

“Lightning Bolt” showed no signs of slowing down — instead he got faster.

Bolt was in irrepressible form. Standing with arms folded, nodding his head on the start line and at the breathless finish striking his famous pose — arms stretched like an archer shooting for the stars.

The world records Bolt set under the Berlin night sky remain unbroken — no one has come close, not even himself.

In Brazil, Bolt had so wanted to break the 19-second barrier in his favorite event, the 200m, but he didn’t have the legs. “I’m getting old,” he told reporters after clocking 19.78.

So, what next for the boy from Sherwood Content, a small town on the northern tip of Jamaica, the sunshine factory for sprinting superstars?

Asked in Rio whether this would be his final Games, he replied: “I want to say so. I think this is the last one.”

If he steps down from the Olympic stage, Bolt will end his career with one less Olympic gold medal than the likes of American sprint and long jump great Carl Lewis and Finnish middle distance runner Paavo Nurmi.

But Bolt is also an 11-time world champion and he has already suggested he could finish his career at the 2017 world championships in London, although he may only go over 200m.

When he was growing up, Bolt’s first love was football. He jokes that when he hangs up his running spikes he will put on a pair of football boots for Manchester United.

“I haven’t got a call yet but I know it’s coming,” he joked in July following Jose Mourinho’s appointment as the English Premier League club’s manager. “I think he’s waiting until after the Olympics.”

Perhaps when he is pondering his future, Mom, not Mourinho, might know best.

“I would hope he’ll settle down, get married and start his family,” Jennifer Bolt recently told CNN’s Don Riddell.

“He told me many times that he’s going to start his family.”

Bolt, who posted photos of himself hanging out with members of the women’s Swedish handball team after winning gold at London 2012, has remained coy about who he is currently dating.

Even if there one special women in his life, Bolt has a lot of love to give, according to his mom.

“He’s trying to get everyone to love because … he has gotten a lot of love. He likes to share some of that joy with others.”

The son she described as “hyperactive” has an irrepressible charm that makes him loveable. He smiles, he jokes, he stops to sign autographs.

There have been more adorable, cheeky antics in Rio.

First Bolt turned to flash a cheeky grin to the cameras on his way to winning the 100-meter semifinal then, in the 200m semis, he had time for a chat with Canadian rival Andre De Grasse as they took the line.

Moments like this have helped Bolt transcend his sport. The fastest man on the planet is also one of the world’s most famous — and most marketable — athletes.

Gatorade named a drink after him, and he even has his own emoji.

In terms of money in the bank, Bolt has estimated annual earnings of $30 million — and ranks 32nd of Forbes’ list of the world’s highest-paid athletes.

He already gifts a chunk of his earnings through his Jamaica-based foundation, which aims to help kids.

In 2015, Bolt gave $1.3 million to his former high school along with soccer and cricket gear. He’s provided the school with track and field equipment since he signed with Puma in 2002.

He opened a multi-sport playing field in Jamaica, raised funds for pediatric cardiac surgeries and paid for a $4 million renovation to a local health center, using the proceeds from a party he threw to celebrate breaking the 100m world record.

Since his 12-year Olympic career began — he finished fifth on debut in the 200-meter final at the 2004 Games in Athens — he has entertained millions around the world.

He can’t build a playing field for everyone, but a smile costs nothing and he’s raised plenty of those.

Track and field will be a much dimmer place without the “Lightning Bolt,” but in a sport dogged by doping sprinters the fact that the brilliant Usain Bolt shone a light at all might just be legacy enough.