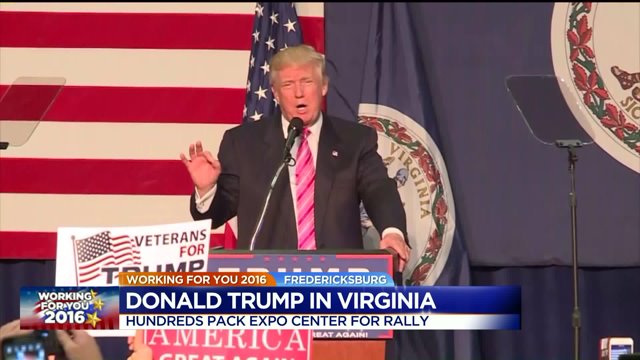 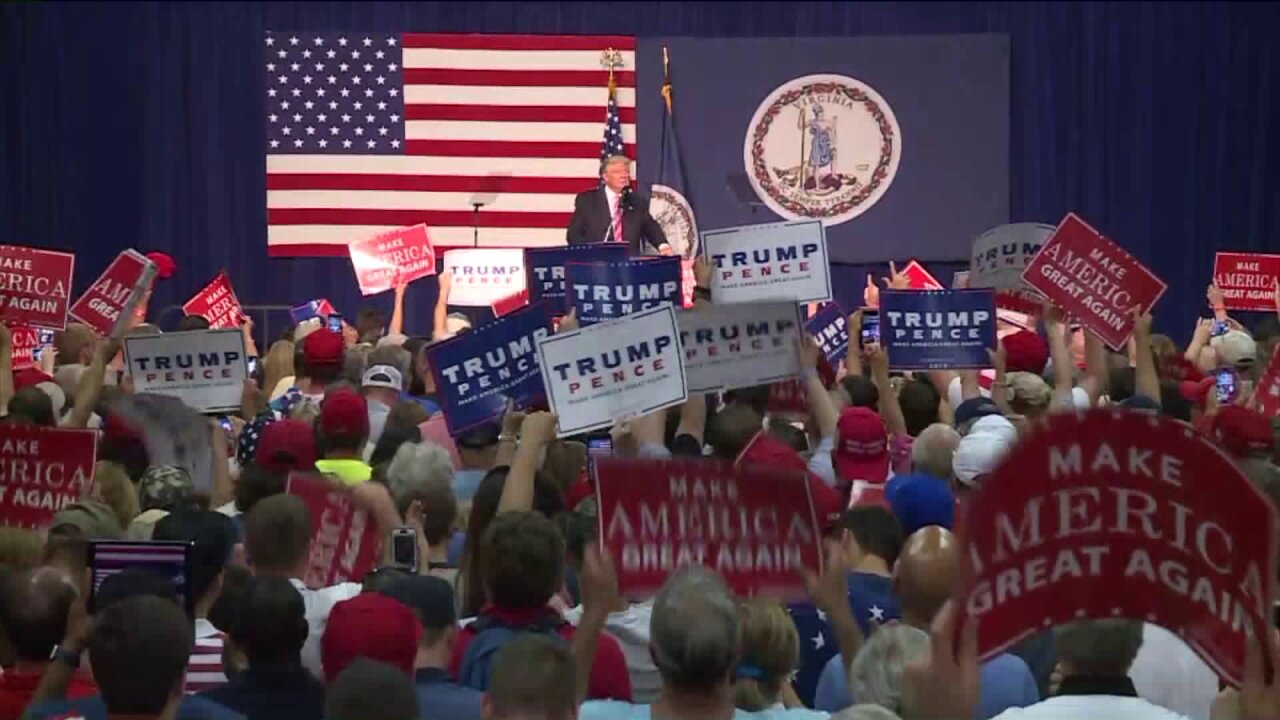 Hundreds of very enthusiastic supporters waited for hours outside in the heat to see Trump at the Fredericksburg Expo & Conference Center.

In fact, Trump campaign staffers said folks started arriving at 6:30 a.m. even though the venue did not open until 3 p.m.

That line of supporters line wrapped around the building and several in the waiting crowd passed out in the heat and humidity.

Speaking from a teleprompter, this rally had a much different tone from his last rally in Richmond in June, and Trump stuck to his main message.

“Together, we will make America great again,” Trump said.

Additionally, the candidate addressed military spending and care  in a state that has about 800,000 veterans.

"The Obama-Clinton administration has betrayed our veterans, betrayed them very badly. Veterans are dying waiting for simple care, they're dying online waiting to see a doctor, five days, six days, seven days, it all ends and it ends fast under Trump administration."

Trump said he wanted to create a new future for America while pointing out that he was not a politician.

Trump went on to tell the crowd his vision for his campaign.

"I am running to represent great majority of Americans, Republicans, Democrats, Independents, Liberals, Conservatives who turn on television, don't see anyone speaking up for them, the forgotten man, woman," Trump said. "This campaign about giving a voice to those who don't have one, I am your voice, I am your voice."

Trump supporters were happy with what they heard.

“You know what really got me, the enthusiasm. Even standing out there in the heat, everyone wanted to be there and was very excited about it,” said Jeff Spinnanger from Fredericksburg.

Joan Blankenship from Richmond, who recently had knee surgery, waited for hours to see the candidate. She said seeing Trump was awesome.
“We are going to build a wall and Mexico is going to pay for it,” Blankenship said.

The latest CBS News News Battleground Tracker poll has Trump 12 points behind Hillary Clinton in the Commonwealth, but there is no denying these supporters love their candidate and said he is going to turn Virginia red on Nov. 8.

Supporter announces @realDonaldTrump to the stage in Fredericksburg about 45 minutes early and he doesn't show up. pic.twitter.com/BClYQwvW2W

The Fredericksburg Expo Ctr is packed for #Trump. Gettin a little warm. pic.twitter.com/jjgJ9QBamI

Prompters at the #Trump rally in Fredericksburg. Never saw them at Richmond Raceway or Richmond Coliseum rallies. pic.twitter.com/sJEdTLGvGr

Folks using umbrellas to block the sun waiting for Trump in Fredericksburg. Some been here for hours. #trump pic.twitter.com/pYyYNwErqE

A small group of protesters with the Democratic National Committee gathered outside the expo center to unveil “Donald Ducks.” Participants said their goal was to highlight Trump ducking releasing his taxes.

However, they did not get close to the Trump supporters, who were waiting in line, since police officers kept the back.

Trump's campaign later kicked them off the property.

"Donald Duck" has arrived at the @realDonaldTrump rally in Fredericksburg pic.twitter.com/jHYeK1diRY

So this happened. They were forced off property for threat of trespassing after about 20 min. #Trump pic.twitter.com/1KeElWfdKS

Trump last campaigned in Commonwealth in Ashburn in early August and held a town hall in Roanoke in late July.

The Trump campaign underwent a major shake-up, it was reported Wednesday, bumping up senior adviser and pollster Kellyanne Conway to campaign manager and hiring Steve Bannon, the executive chairman of Breitbart News and a former investment banker.

Trump's campaign overhaul comes as he tries to stem the tide of statewide and national polls that have shown Clinton with leads in many battleground states.