RICHMOND, Va. -- It was the smooch seen around the world. Sixty years ago this summer, Elvis Presley and a young woman were captured on film kissing in a Richmond hallway.

For decades, Barbara Gray, the woman in the picture, went unidentified, but now she is reflecting on kissing The King.

Barbara's brush with Elvis Presley began with a dare.

In June of 1956, Barbara’s friends convince her to call Elvis in his hotel room at the Francis Marion Hotel in Charleston. Elvis had just performed in South Carolina before 4,000 screaming fans.

"I didn't really know him or know what he was about," said Barbara. “The operator answered and I said ‘Elvis Presley’s room please.'”

Barbara said the 21-year-old singer chatted with her for at least an hour.

A curious Elvis invited Barbara to his next concert in Virginia.

Two days later the pair would meet at the diner in the Hotel Jefferson.

“He just reached out and hugged me," said Barbara. "I didn’t know what to say. It was like I was numb.”

Elvis and Barbara at meet at the Hotel Jefferson, COURTESY: Al Wertheimer

From her home in South Carolina, the 80-year-old remembers seeing the sultry singer for the first time at The Hotel Jefferson in Richmond.

“Elvis turned around and I almost fainted. He was absolutely gorgeous," said Barbara. “I just melted.”

Barbara and Elvis flirted over lunch hours before his two concerts at The Mosque.

In a cab ride to the auditorium Barbara says, “He played with me the whole way and it is only three blocks!" 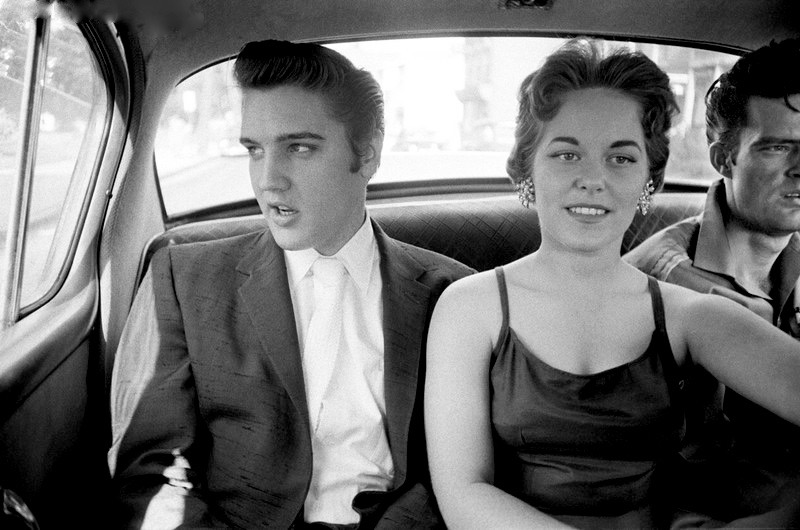 At the Mosque Theatre Barbara said Elvis took her out to the hallway just a few feet from the stage where thousands of his fans were waiting.

Barbara said the King moved in to canoodle.

“I said no I’m not. He said, ‘Yes you are,'" said Barbara. "And he was just quick enough to just lean forward and stick his tongue out and that is how quick it happened."

The seminal moment was captured in a dimly lit hallway at Richmond’s Mosque Theatre where not much has changed in the hallway.

A series of legendary images show young lovers locked in an embrace.

“Oh yeah. I just laughed at it. I thought it was silly,” said Barbara.

In the photo called "The Kiss" Elvis touches tongues with the shapely 20 year-old known then as Bobbi Owens.

“Right of the bat he started to embrace me and hug me and said kiss me and I said 'no'," said Barbara. "At least he got a kiss of some kind."

Days after the photos were taken on June 30th, 1956 Elvis would rocket to fame after appearing on national television. Barbara would fade into obscurity.

“We were both drawn to each other because he wasn’t going to let me go," said Barbara.

The storied snapshots were the work of free-lance photographer Al Wertheimer hired by RCA to capture Elvis’ every move.

“I didn’t even notice him and neither did Elvis,” said Barbara.

In a 2011 interview, the late-photographer described how he nearly missed The Kiss.

“I come down this staircase and find these two people down this narrow hallway and its Elvis and the girl. And I say to myself, 'Hmmm. I have got to get closer,'” he said.

Following the concert Elvis wanted Barbara to stay with him. Presley would invite Barbara to join him in New York City.

“He was taking me to the train station with him," said Barbara. “I told him that I had a boyfriend that I was going to see.”

Barbara turned down the offer and walked out on Elvis.

“I never saw him again,” she said.

Since Elvis' death in 1977 the grainy kiss frozen in black and white has tantalized legions of fans.

“Everybody wanted to know who that (girl) was. And nobody knew who that was," said Barbara.

Barbara knew. She wanted to kiss and tell, but said photographer Al Wertheimer rebuffed her claims.

Over the years, countless women claimed to be the secret woman in Barbara’s high heels that unforgettable day.

“People always thought it was a tall girl. Nobody realized that I was 4'11''," said Barbara.

Harry Kollatz, Jr. senior writer for Richmond Magazine wrote about Elvis' 1956 visit to the River City and even tried discovering who the mystery girl was in the photo.

“It remained a mystery and Wertheimer liked it that way," said Kollatz. “It is a guy and girl in a stairwell and he happens to be Elvis Presley."

Kollatz finds it ironic that one of the most famous performances in Richmond unfolded off stage.

"In terms of popular cultural history it is a landmark photograph," he said. "There was only one Elvis and only one moment and we got it. That is something we can be proud of.”

Kollatz said the image is dripping with mystique.

Throughout the decades Barbara could not escape the smooch.

"Well, I just think it is funny. It is very popular all over the world," she said. "It’s on everything. It is not just lunch boxes. It’s on jewelry, watches, clocks.”

Barbara never sought fame and fortune. The happily married real estate manager just yearned for recognition as the mystery woman in the photo with Elvis.

In 2011, Barbara’s veil of anonymity was lifted in a Vanity Fair article.

“He was a wonderful boy," said Barbara.

Eventually Al Wertheimer and Barbara became friends. The photographer even shared some images.

Barbara reflected on her intimate moment with Elvis with a tinge of regret.

Barbara says Elvis in her mind will forever be 21.

“I’m so sorry he is gone but I’m happy where he went to. He is in heaven," she said.

It all started Sixty years ago, when the 20-year-old accepted a dare.

“It was a very comfortable day. You know? It was like I knew him all my life," said Barbara.

All of these years later Barbara Gray relishes the day she was the King’s Queen.

“I thought my god why didn’t I go with him," said Barbara. "It was wonderful and I’m sure every girl in the world wanted to be me.”

Barbara Gray who was born in Charleston does have roots in Richmond. Her mother’s family was from the Lakeside area of Henrico County.

She said she enjoys meeting fellow Elvis fans and signing autographs of the famous photo of her kissing Elvis Presley.

If you would like to contact her about obtaining an autographed photo you can reach Barbara Gray at Bobbisgray@yahoo.com.