RICHMOND, Va. -- An exuberant crowd welcomed home Sen. Tim Kaine to Richmond Sunday night after his first appearance with Hillary Clinton as her running mate at a rally in Miami, Florida.

Kaine and his wife, Anne Holton, who serves as Virginia's Secretary of Education, arrived home around 10:30 p.m.

Kaine gave Holton a kiss as the two addressed a crowd of well-wishers who had been waiting for hours.

“I’ve been telling people my neighbors like to party,” Kaine joked as the crowd cheered.

In a nearly 10-minute speech, Kaine thanked his neighbors for their support all the way back to when he got his start in politics on city council back in 1994.

“We kicked the campaign off standing on our back porch. And we had Jonathan the Juggler and about 35 of you," Kaine laughed. "You’re looking a little older, but the numbers are bigger.”

Kaine said he was grateful Clinton selected him as her running mate before schooling the crowd on the history of the Commonwealth's national political figures.

“There has not been a Virginian – who is a political figure in Virginia -- on a ticket of a major party since the 1840s,” Kaine lamented.

Kaine added that one of the reasons he fought to elect Obama eight years ago was to inspire a new generation of young people who can now see the highest office in the land as a possibility.

The couple then thanked their neighbors for everything they have done for the family since they relocating there more than 30 years ago.

“We have lived in this house nearly 25 years,” Kaine said. “Our whole life revolves around our neighborhood and St. Elizabeth’s, our parish.”

Kaine credited the community as the primary reason he did not move o Arlington when he was elected to the Senate in 2013.

Kaine then informed the crowd that he was a Kansas City boy and that his wife brought him to the River City after they met in law school.

“I get some credit, don’t I,” Holton laughed.

Kaine called his wife the greatest adventurer before she thanked their neighbors.

Holton also asked the crowd if they saw her husband’s speech with Clinton in Miami.

“The feeling there was that we were coming off this really negative, miserable week," Holton said. "And we are turning a mood and we’re off to Philly with the greatest presidential candidate.

Holton then wrapped up the homecoming.

“I’ve got to make him get to bed,” Holton said before the couple briefly mingled with the crowd before heading inside their home. 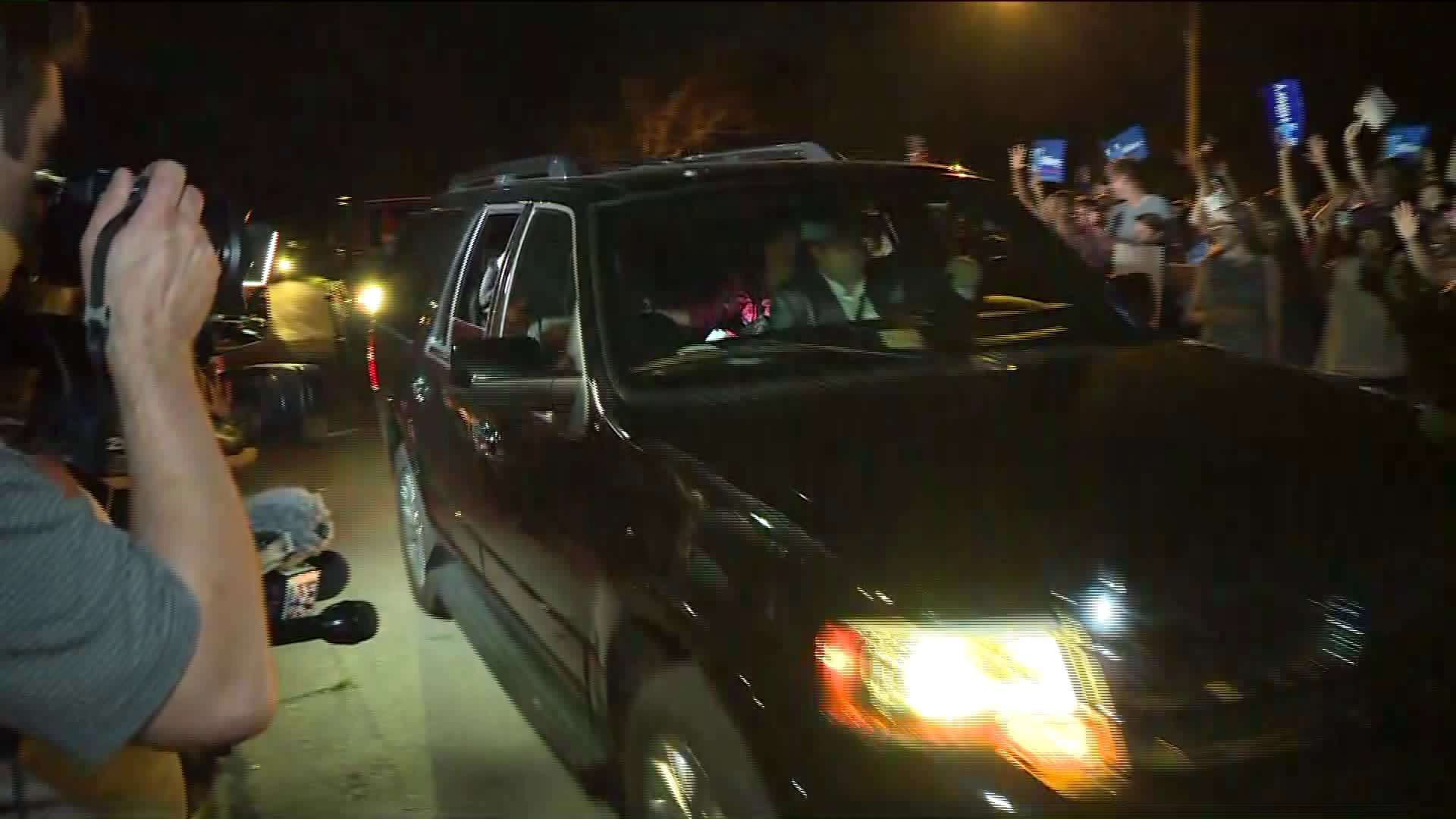 Kaine took the stage alongside Clinton in Miami Saturday and offered his first greeting to voters as a vice presidential nominee -- in Spanish.

"Bienvenidos a todos," the Virginia senator said, a phrase that translates to "welcome to everyone."

Clinton and Kaine's first joint appearance as running mates at a campaign rally here marked the official unveiling of the Democratic ticket. The duo will face off against Republican presidential nominee Donald Trump and his running mate, Indiana Gov. Mike Pence.

Right off the bat, the contrast that the Clinton campaign will seek to highlight between Kaine and the Republican ticket during the general election was clear.

Speaking at Florida International University, a campus that is more than half Hispanic, Kaine described his vision for an inclusive country. Dipping in and out in Spanish several times, he drew on his experiences as mayor, governor and the time he spent helping Jesuit missionaries in Honduras to emphasize the importance of service.

"I've always believed that however you serve, what matters is whether you actually deliver results for people," Kaine said. "That's been my goal in every position I've ever held."

Kaine sheepishly acknowledged that he may not be a household name, saying: "This might be the first time you've heard my name."

But unlike the famous real estate mogul on the other side of the political aisle, Kaine argued, his heart was in the right place.

Then, riffing with the crowd, he added: "You're right, he doesn't trash-talk everybody -- he likes Vladimir Putin."

Clinton introduced Kaine as someone who has shown a "lifelong commitment to social justice."

"Sen. Tim Kaine is everything Donald Trump and Mike Pence are not," Clinton said. "He is qualified to step into this job and lead on Day 1. And he is a progressive who likes to get things done."

Her introduction of Kaine was in stark contrast to Trump's first event with Pence last weekend. Trump took the stage by himself and spoke at length before turning to the topic of his new running mate. Trump and Pence, who did not know each other prior to this election, also lacked the warmth and admiration that was evident between Clinton and Kaine on stage in Miami on Saturday.

She heralded her pick as a man of faith, willing to work across the aisle and committed to furthering the progressive cause.

"In both of our families, faith wasn't just something we talked about at church on Sundays, it was a call to serve others in every way that we can," she said.

As he looked on from a stool behind Clinton, Kaine lived up to his reputation of "Mr. Nice Guy," grinning and waving to the crowd, and clearly reveling in the moment.

But Clinton warned the crowd: "Make no mistake, behind that smile, Tim also has a backbone of steel."

Pivoting to an issue that holds personal significance for Kaine, Clinton continued: "Just ask the (National Rifle Association). Over and over again he has had the courage to stand up to the gun lobby in their own backyard."

During his tenure as governor, Virginia grappled with the 2007 Virignia Tech massacre -- the country's biggest mass shooting up until that point. Fellow Virginians to this day praise the way Kaine handled the tragedy -- an episode that they say demonstrated both compassion and governing skills.

Trump offered his thoughts on Kaine via Twitter, saying: "Tim Kaine is, and always has been, owned by the banks. Bernie supporters are outraged, was their last choice. Bernie fought for nothing!"

He later added, "Just saw Crooked Hillary and Tim Kaine together. ISIS and our other enemies are drooling. They don't look presidential to me!"

Friends and colleagues describe Kaine as steady and even-handed, often using the word "decent" to describe his character.

Politically, Democrats expect Kaine could help Clinton rally voters in the important swing state of Virginia, and that his fluency in Spanish will be a big asset as he campaigns in minority-heavy areas of the country.

Rick Ely, a Miami resident attending the event, said he believed Clinton had made a "safe choice."

"I would have preferred to see her choose Elizabeth Warren -- a more progressive agenda that way. But I certainly understand with Virginia being a swing state, the fact that he speaks fluent Spanish, is helpful," said Ely, 58.

Clinton announced her pick Friday night in a message to her supporters, ending weeks of speculation just days ahead of the Democratic National Convention in Philadelphia that's set to kick off on Monday.

But even as Clinton and her campaign methodically vetted a number of potential running mates, it was clear that Kaine was on the fast track.

Both Clinton and her husband, former President Bill Clinton, are personally fond of Kaine and believed he would be a loyal and dependable governing partner.

Aides say as Clinton deliberated over a shortlist of potentials vice presidential nominees, she continued to return to her "unshakable confidence" in his readiness for the job, as well as her personal comfort with him.

During the vetting process, Clinton was advised by her campaign chairman, John Podesta: "It needs to be someone who, whenever they walk into a room, you are glad to see them, and want to have them as part of any conversation."

Ultimately, it was Kaine that best fit that description.

Anita Goldfeld, 76, said she drove from Boca Raton to see Clinton and Kaine's first event together. Goldfeld supported Bernie Sanders during the primaries but is enthusiastically supporting Clinton -- and now Kaine -- in the general election.

"I think that he is a man who knows, who's had a lot of experience, who would be an excellent asset to Hillary," Goldfeld said.

On the criticism that Kaine is a white, male and ashe himself has put it, "boring," Goldfeld responded: "I'll take boring and knowledgeable -- I'll take a decent human being over someone like Donald Trump."