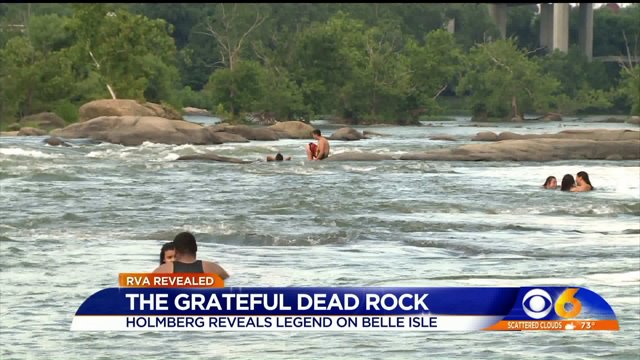 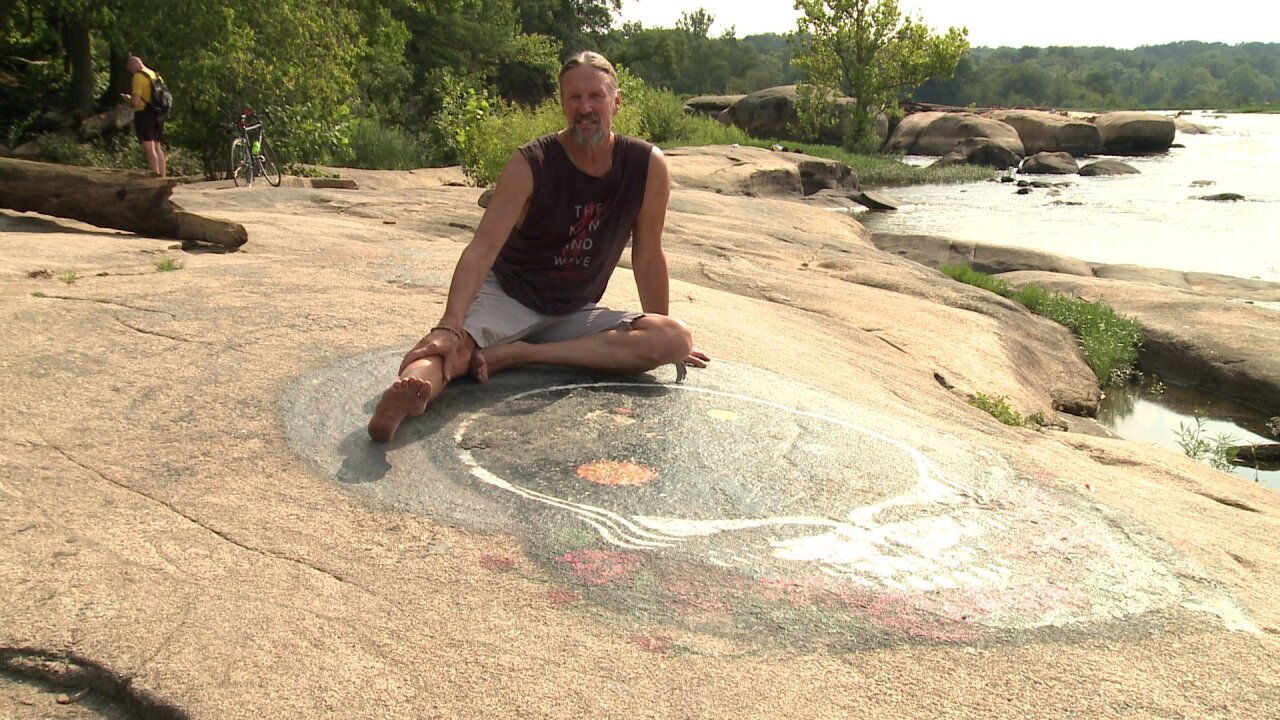 RICHMOND, Va. -- The "Grateful Dead Rock" on Richmond's Belle Isle - or just "Dead Rock" to the faithful - is one of Richmond's oldest example of guerrilla (not-quite legal) art, and likely its best-known example.

Tourists come to check it out as well as children with their parents, along with hippies and river rats of all ages - for two and maybe three generations now.

It's a famously loose place, where lots of partying happens, including some baby-making hanky-panky.

So what's the real story?

Good luck with that.

But here are some basics:

It's about a half-mile upriver from the footbridge, right beside the mighty James River near the new wooden trash receptacles on the main path.

You probably know the "steal your face"-inspired logo is one of the signature symbols of that legendary hippie jam band, the Grateful Dead.

Numerous people have modified it, touched it up or completely repainted it during that time, making it a rare example of living art.

As you may know, you can get arrested for painting on river rocks. But this one was there before it was part of James River Park, so it's grandfathered.

Who first painted it? There are lots of stories, but there is one that carries a little more weight because it is why Dead Rock had been allowed to exist all these years.

Ralph White, the amazing and unsinkable Mark Trail-like retired James River Naturalist, said the painting was there when he was hired in 1980.

Legend has it the Grateful Dead played an early show or two in Richmond in the '70s, well before they were banned from RVA in '85 because of a mini-riot at the Coliseum and LSD overdoses. (I reviewed that show for the Richmond Times-Dispatch. It was quite the night.)

Some believe the Dead partied on Belle Isle while they were here. (It was easy access then because of the pre-Lee Bridge causeway and the island's steel mill had shut down.)

Others poo-poo that Dead-party legend.

In any event, White says, he was told there was a family of Oregon Hill brothers, the Nuchols (spelling? Sounds like knuckles) who were big fans and attended an after-concert party on the island.

"The youngest brother," White said, "loved the Grateful Dead. And after seeing the show, he died of leukemia. And the older brothers said, you know, we're just poor guys out of Oregon Hill, we'll do a painting as a memorial. So they went out to Belle Isle and painted on the rock where everybody had hung out."

White admits the story could've been spun to play on his sympathies.

And it worked. His heart was touched.

"The deal I cut with local kids," White added, "was, look, all the other graffiti around that symbol . . .  has to be removed. I'm going to get rid of it. And if it comes back, and it's vulgar, I'm gonna take everything off. And they said, 'No, no, no. We'll will make sure.' And by God, they did."

There were times it got too big - at one point you could see it flying over the city - and too different from the original. But overall, the keepers of Dead Rock have kept it real.

Please watch the video for some personal stories.

And if you have different origin stories, please email me at here. I won't rat anyone out.

And by the way, it's not true that you can press your ear to the rock and hear "Uncle John's band, by the river side. Got some things to talk about, here beside the rising tide."

I tried it. All I got was a sandy ear.