A nation looking for a pick-me-up after a brutal week might have just found it in a game of pickup basketball between cops and kids.

The feel-good pictures and video of the game have gone viral, understandable given last week’s grim news: five police officers killed in Dallas and two black men killed by police in Louisiana and Minnesota.

The impromptu game sprang out of a conversation Saturday in Lafayette between Indiana State Police troopers and some kids near a local park, according to CNN affiliate WXIN. The troopers — David Vido, Stephen Grayson, Jeremy Piers and Kent Westcott — had just wrapped up a traffic stop when the kids came up and started talking with them.

Next thing you know, the troopers — in full uniform and gear, mind you — were in the park with kids, hooping it up on the court.

Now, it wasn’t exactly an even match up, about four troopers versus eight kids, and no one was exactly lighting it up like Steph Curry, but that really wasn’t the point now was it. 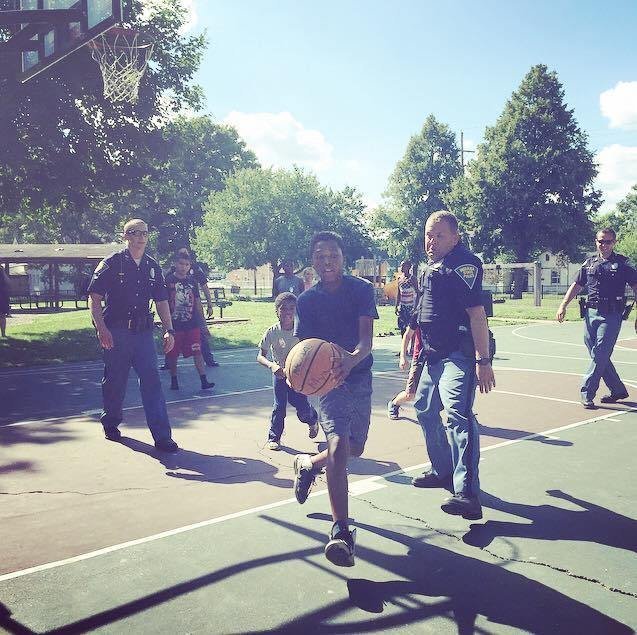 The sight of neighborhood kids and the boys in blue playing a simple game of pickup basketball in Indiana — a state where basketball is more religion than pastime — is the kind of middle ground everyone wishes there could be more of between police and a community.

“In the face of all that is going on in America right now, it was refreshing to drive into Lafayette and see this,” wrote Kristin Pearl, who posted the video, viewed more than 58,000 times, and pictures of the game on Facebook.

Oh, by the way, the troopers lost the game by one point. No word yet on when they’ll swing by the park again for a rematch.