ELIZABETH CITY, N.C. – Just before Noon on Wednesday, officers were dispatched to a location where a truck spilled potatoes, lots of potatoes.

A semi-truck and trailer was attempting to make a right hand turn at the intersection of Halstead Blvd. and Peartree Road when the right bulkhead, that contained a trailer full of potatoes, gave way.

As the trailer split in half, tens of thousands of potatoes spilled onto the road, bringing traffic to a standstill, according to WTVR sister station WTKR. 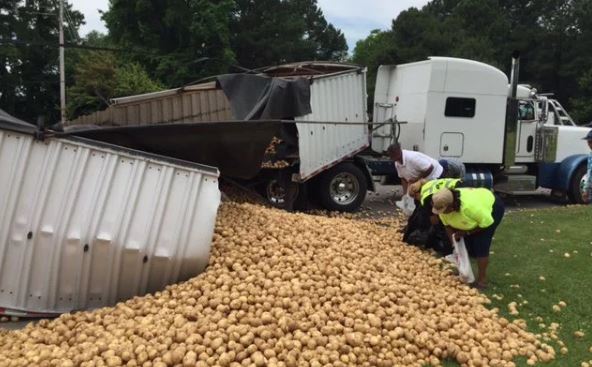 The trailer collapsed and grounded out, which kept it from being able to move.

Department of Transportation officials arrived on scene with a front end loader and two dump trucks to assist in the cleanup.

Numerous Elizabeth City residents helped with clean-up and planned dinner a little early, taking as many potatoes they could carry away.

The truck belonged to Eldroth Construction out of Conowingo, Md.

No one was cited in the incident and there were no injuries or property damage – aside from the bruised potatoes of course.