Va. man remembers Muhammad Ali: ‘It was an honor to be his friend’

RICHMOND, Va. -- Many would call Muhammad Ali the greatest boxer of all time. He had already retired from the sport when Virginia attorney Ron Tweel started representing him in 1986.

“We always got along well over 30 years which is unusual for any lawyers out there to realize we never had the first dispute or argument or disagreement about anything so that’s quite unusual when you’re a lawyer for that period of time,” Tweel said.

Tweel considers Ali more than a client. The families are best friends. Ali even attended the weddings when Tweel’s children were married.

“He and his wife are just the best people you'll meet that's all there is to it,” Tweel explained.

The images in the ring only share a small part of the man Tweel calls kind, patient, and loving.

“He liked his boxing. He was very proud of what he did, but it did not define him in his mind. In his mind it was his humanitarian efforts, the Muhammad Ali Center, the work he did around the world for world peace and for justice. He was a great civil rights leader in the early days, religious tolerance his friends were of all religions,” according to Tweel.

While his attorney and friend knew him personally, many will remember Ali for his sport.

Twill said, “We would eat dinner out in a restaurant if somebody came up and asked him for an autograph he always gave an autograph. He'd stand up and take a picture. He never refused anybody access to him he knew how to treat people.”

For Tweel, it was an honor to be Ali’s lawyer and friend. He knows the friendship between the families will continue.

“We are still going to be very close with his wife Lonnie and still have a lot of business to do with them and the friendship of course will continue and it was, as I said, outside of my children and grandchildren it's been the highlight of my life,” he said.

Tweel told us Ali actually considered buying a house in Charlottesville, but ended up buying in Louisville instead. That’s where Tweel was tonight, working on the final arrangements for his client and friend.

Photo of Ali and Tweel families taken a little over eight years ago. (Photo credit Will Kerner)

In a text earlier today I referred to Muhammad as a fighter: A boxer and fighting for civil rights as well as battling Parkinson's. He was a fighter. But more importantly he was a lover. What i observe is that he approached everything in a deep foundation of love. He and his wife Lonnie, who has inspired me personally just as much as he has, have impacted all of us directly and indirectly because of their love. I have been listening to stories on the radio all morning of people’s experiences with him. It is so difficult to put into words why there are some people that walk this earth and have such a profound impact on humanity like Muhammad has done. I love listening to these stories. It has created an image in my mind of his arms wrapping around the entire world.

I can tell a few stories briefly from my experiences… I met Muhammad and Lonnie when I was twelve and I have plenty of things of course that stick out in my mind over the years… Muhammad and Lonnie met my now husband before my father did and when they called him to “approve” of Chris my Dad flew out to see us. I was so grateful! …Flash to Muhammad listening to Lonnie read from the Koran to Chris and I at our wedding…Again so grateful for the generosity of their love.
One time, Muhammad and Lonnie were in San Francisco for the Think Different marketing campaign if I recall correctly for Apple- and I found myself in a room with Gregory Hines. They said, “Jennifer, come over here” and they introduced me to him as a fellow dancer. I honestly had a difficult time having the confidence to identify myself as a dancer standing next to this great artist. But this is an example of how in a broad way (“Think Different”) and small way (“Jennifer, be yourself!”) that the way Muhammad thought and treated people made a difference. I walked away empowered in that moment. But I think growing up with my parents combined with the way the Ali’s influenced me I have a belief deep down that I can be myself. I can think different. I should do what I love to do.

The most grateful moment I think that I had with Muhammad was about eight years ago. I had just been diagnosed with Multiple Sclerosis and he and Lonnie came to visit us. They came to Charlottesville to see Dad, of course. I never knew the legal dealings that my dad dealt with as one of his attorneys. But they made it a point to reach out to me in a time that I was very afraid. They came and ate with us as a family at my husband’s restaurant, Maya. Just their hugs, words of encouragement and Muhammad’s presence that night while we all ate together made me feel like everything was alright. I could just be myself and that I could deal with whatever struggles came my way. Look at this man sitting next to me! I can only imagine all of the struggles that he has dealt with-even after reading and hearing lots of stories as well as seeing in that moment him physically struggle to eat his soup. What is difficult for all of us to describe this morning was his presence. His presence always made me feel more confident. I am going to miss him dearly as I know everyone will. But he’s with me all the time. Thank you Muhammad for all the love you shared with this world. 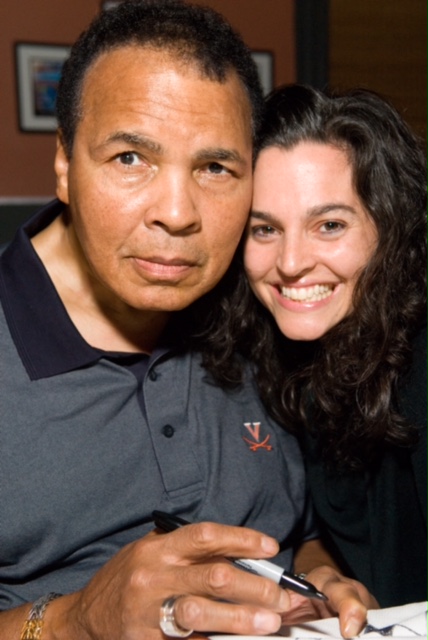