Thousands of atheists gather in DC for Reason Rally 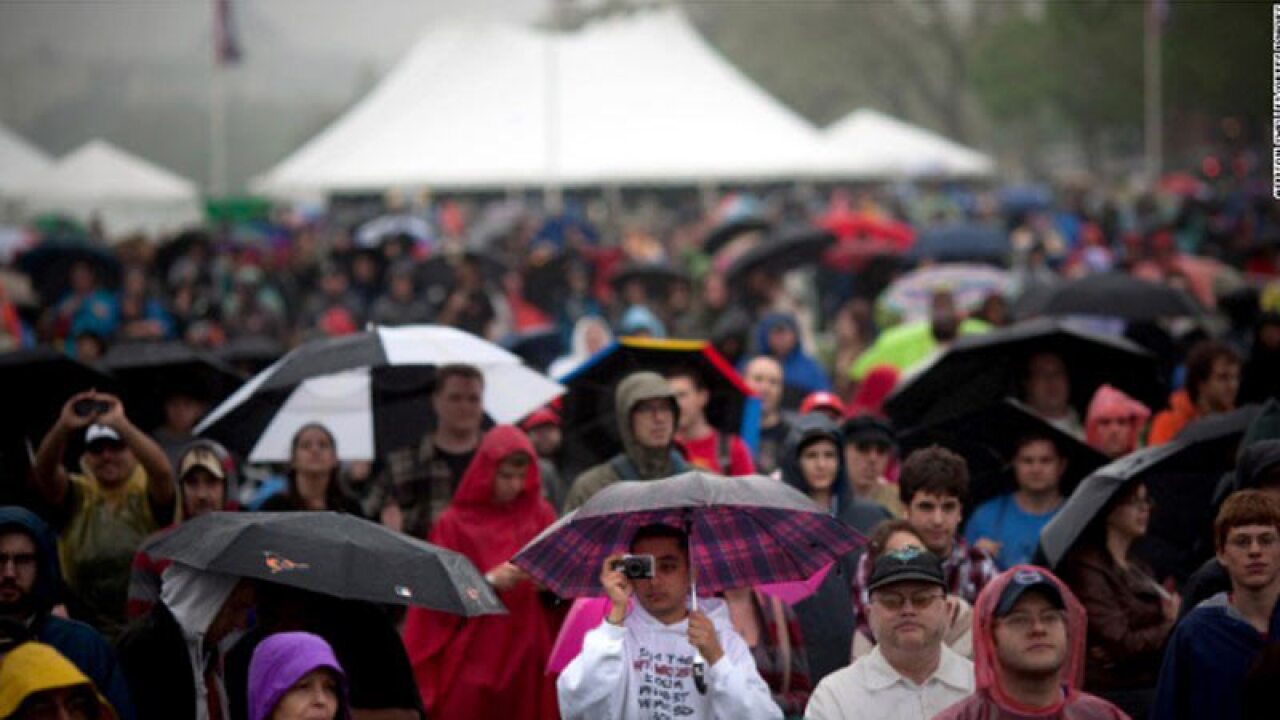 Thousands of atheists will gather in DC for the Reason Rally https://t.co/NAsE7Io6AO pic.twitter.com/jQ12VUbZjC

Thousands of atheists turned out Saturday on a muggy Washington day to take part in “Reason Rally,” dedicated to boosting the political power of the growing number of non-religious Americans.

“We are here, we are one, we are joined and we are celebrating our secular movement and we want more of this in our government,” said rally attendee Doc Gregory, from Hagerstown, Maryland.

“Science Guy” Bill Nye, comedian Lewis Black and members of the hip-hop collective the Wu-Tang Clan were part of a high-profile lineup preaching to atheists at the Lincoln Memorial.

The coalition of secular organizations hoped for a turnout of 30,000 people, though the attendance seemed somewhat more sparse.

Still, the speakers seemed inspired by the setting: the Lincoln Memorial, the site of Martin Luther King Jr’s “I Have a Dream” speech, among other historic moments.

“I have dream that some day children are encouraged to reach their full potential by providing them with the tools they need to learn and encouraging them to question everything,” said Lawrence Krauss, a theoretical physicist and atheist activist.

Other participants called for a non-religious approach to politics amid a hotly contested presidential campaign. They also hoped to flex the political muscles of the religious unaffiliated, turning one of the fastest-growing groups in the country into a powerful voting bloc.

In an informal survey of the crowd, Bernie Sanders, who has called himself a “non-religious” Jew, was the standout favorite.

“He seems to be the only candidate that really cares about everybody,” said Brenda Germain, from Aberdeen, North Carolina. Germain, a member of the group Military Atheists and Secular Humanists of Fort Bragg, was at the rally with her husband, an Air Force veteran.

“We’re tired of watching our politicians pandering to the religious and ignoring us as if we don’t even exist,” Germain said.

While the rally featured musical entertainment, flashy speakers and late-night cocktail hours at neighboring hotels, the thousands of “nones” — people who don’t identify with any religion — coming to the nation’s capital also have a more serious agenda.

The Reason Rally is “absolutely” a political event, said executive director Lyz Liddell. “That’s the reason we’re holding this in an election year. We want to see reason taking precedence over religious-driven ideology.”

Larry Decker, executive director of the Secular Coalition for America, said his group scheduled meetings with more than two thirds of the members of Congress, whom they hope to lobby on behalf of secular values. They also hope to soften some of the social stigma still attached to the “atheist” label.

According to a Gallup poll, 40% of Americans would not vote for an atheist president, though that number has declined in recent years.

There is a “small vocal group of people in this country who have really demonized what atheist means,” Decker said.

But while organizers hope to distance religion from the conversation, the rally’s attendees and speakers include people of faith, notably such legislators as Rep. Tulsi Gabbard, D-Hawaii, and Rep. Bobby Scott, D-Virginia.

“It would be great if we get proportionate representation in Congress, but we are being represented by religious members of Congress and we want to work with them. We want to be heard by them,” said Liddell.

Gabbard said that, as a U.S. soldier serving in the Middle East, she witnessed “endless” conflicts driven by religious sectarianism. Bigotry based on faith also occurs closer to home, the congresswoman continued, citing conservative who insist that President Obama is Muslim, despite his frequent invocations of his Christian faith.

“A pluralistic, secular government is the only way to ensure that all individuals have the freedom to follow the religious path of their choice,” said Gabbard, who is the first and only American Hindu elected to Congress. When Gabbard ran for Congress in 2012, her opponent argued that she shouldn’t be allowed to serve because her religion doesn’t “align” with the Constitution.

The last Reason Rally, held in 2012, may have had a much more excluding vibe, Liddell said. “Some of our speakers were anti-theists and anti-religion.”

This year, she said, the focus has shifted to secularism. “We need to ally with people who share our goals. It’s not an ‘atheist vs religious people’ conversation.”

Decker himself identifies as an unaffiliated Christian. But even so, “I really feel more comfortable in this community,” he said.

Secularists might be the only group that sees hope in a presidential election so rife with vitriol because religious identity hasn’t been a big part of either party’s leading candidates, said Reason Rally organizers.

“It’s refreshing to see that we’re not looking at one religious group as the primary influence in elections,” Liddell said.

Decker said it was good thing when Sen. Ted Cruz and Ohio Gov. John Kasich dropped out of the presidential race because they were among the candidates who had invoked God in their reason to run for president.