RICHMOND, Va. -- The City of Richmond will make changes to what some call a dangerous intersection, after a CBS 6 investigation found multiple motorists repeatedly breaking the law.

When traveling on Hull Street toward Midlothian Turnpike, the right lane becomes a “right turn only” lane when Hull Street intersects with Clopton Street.

In the brief time CBS 6 cameras were rolling, we saw multiple cars, even a GRTC bus go straight instead of turning right in that lane.

Although, there was no sign indicating it, GRTC Director of Communications, Carrie Rose Pace, said buses are allowed to go straight out of the right lane at the intersection. She said the sign that read “right turn only except for buses,” disappeared around 2010.

David Pugh contacted CBS 6 Problem Solvers after he said he got tired of seeing the dangerous driving.

“If they are back there in your blind spot you could easily whip over and not see them at all,” he said.

Now, the Richmond Department of Public Works reached out to us with plans to help improve the markings and signs in the area. 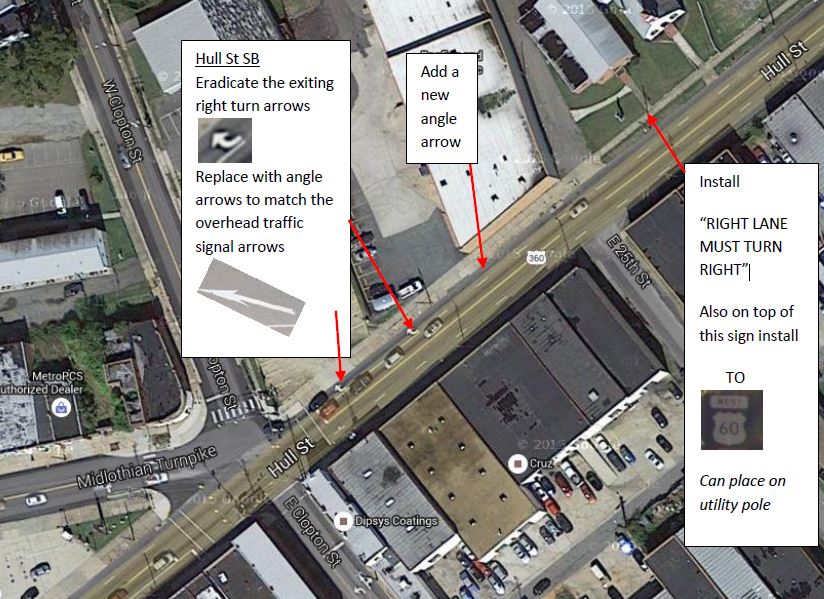 The department is removing the right turn arrows at the intersection and replacing it with angle arrows to turn on Midlothian Turnpike and Clopton Street. The sign will also include “Except Buses,” which means they are the only vehicles that can keep straight out of the right lane.

There will also be additional “Right lane must turn right” signs leading up to the intersection.

The department said it will take around 30 days to complete the changes.