CANTON, Ohio – A four-year-old Ohio boy who dreams of being a police officer, received a big surprise from the Canton Police Department Wednesday.

Liam Murphy was just like any other healthy four-year-old, until last September, his family found out he had type-one diabetes.

“We didn’t have any idea; we didn’t even know the warning signs of it,” his mother Emily told FOX8.

Little Liam’s love of police officers is something that is very evident to his family and friends. He was a police officer for Halloween and his family said since then, he has never taken it off.

Liam said he loves police officers because they fight the bad guys. 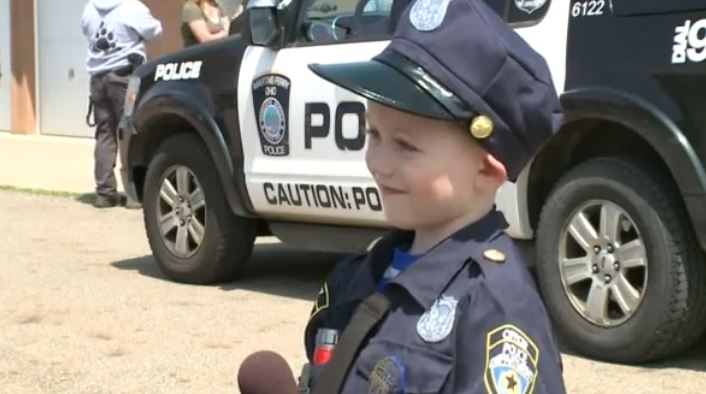 Through a family friend, Liam was invited to the Canton Police Department’s K-9 training center where he made an immediate impact on the officers.

“When he came out here last week, we were so taken by this kid. You know, he was struggling with some health issues but you wouldn’t know it by talking to him,” said Officer Eric Stanbro.

Liam made such a big impression, the officers decided to get together and do something special for him.

Wednesday the department surprised Liam with his very own motorized police cruiser. After Liam received his new gift, the officers let him drive it in a procession of real police cars, as if they were going out together to fight crime.

The four-year-old said he going to use his new cruiser to help out the real police officers.

“I going to catch speeders,” he said. “They’re gonna hear my sirens and pull over.”

“He’s a tough kid, he goes through a lot every day with his diabetes and he has to get a bunch of shots and he has to get his finger pricked a lot,” said his mother. “He’s real brave and he’s doing real well with it, but this just takes the attention off of that and gives him something else to focus on.”