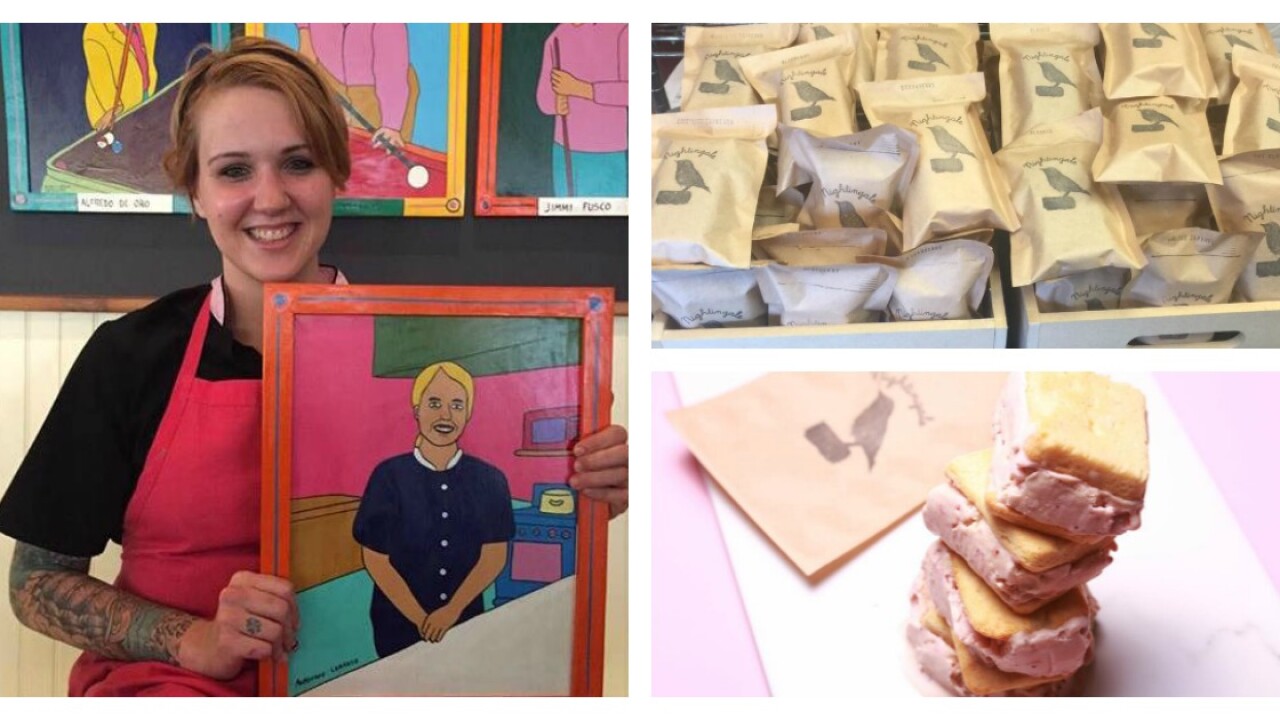 RICHMOND, Va. – Executive Chef Hannah Pollack is excited to answer questions about her new side business as she moves around the kitchen at Greenleaf’s Pool Room, ahead of the lunch crowd.

“Hold on a second, let me write this check,” she says.

Her time is tight these days as she juggles the daily kitchen grind at Greenleaf whilst weekly churning out hundreds of handmade, toothsome Nightingale Ice Cream Sandwiches.

“I’ve really been working a lot since it has taken off quickly,” Pollack says, her cheerful voice almost overpowered by background kitchen sounds.

These delights are popping up around town in a few select places; Chiocca’s first, then Shield’s Market, Ellwood Thompson’s and now Libbie Market. Pollack says they will soon be in Tom Leonard’s, a Short Pump supermarket.

The vintage logo is meant to evoke a soda fountain feel; above the bird image “Nightingale” is in cursive, stamped on a simple, heat-sealed brown bag lined with a coating to prevent the goods from melting through – if for some reason you didn’t eat it straight away.

Only operating since February, demand has doubled as the season ushers in warmer temperatures.

“We have been selling out,” Pollack says. “Shield’s [Market] has said ‘double our orders.’”

Before discussion gives way to flavors, let’s talk about love; after all, sweetness has its place among confection.

The romance between Pollack and her Belgian-born husband Xavier Meers began after her stint in culinary school, in the kitchen of the now-closed Belle Vie European Bistro (which moved into the city as Brux’l Café).

He’s worked in kitchens his whole life, Pollack says, and she spent five years learning from him about classical French cooking.

Along the way, they fell in love and were married.

It was another romance that inspired Nightingale’s namesake.

Greenleaf’s is named for “The Aristocrat” Ralph Greenleaf, a playboy from another century, still considered one of billiard’s finest champions. He toured with his wife, an exotic, vaudeville performer known as “The Oriental Nightingale.”

About a year after Pollack first served the popular sandwiches at Greenleaf’s, the present day lovebirds decided it was time to reach more people. In October, Pollack began tackling the paperwork and certifications in earnest.

Five flavors, with special ones planned

The flagship was a classic chocolate cookie with a brownie texture and vanilla ice cream. Chiocca’s, their first customer, carries two exclusive flavors; peanut butter cup and black raspberry, both on a chocolate cookie.

“There will be some different, fun ones for the summer that people would like,” Pollack says. “Peanut butter and jelly swirl, with peanut butter cookie.”

She’s experimented with a Kaffir lime syrup, gelato- like, between coconut-flavored shortbread.

“People like flavors that remind them of being a kid,” she says.

Pollack recently bought more equipment to keep up with demand; another ice cream maker and another freezer.

“People really seem to like them,” she says.  ‘We get a lot of messages on Facebook that say ‘we really like them, where can I get them.’”

When asked if they did market research before opening, Pollack says they “had such a great response from Greenleaf and at the Farmer’s Markets, that we just went with it.”

And in regards to the observation that most successful ice cream business is done by locals, whereas a Ben and Jerry’s chain couldn’t succeed, Pollacks says that’s a Richmond strength.

“I think Richmond is all about homemade and local, it’s a city that loves everything  from Richmond.”