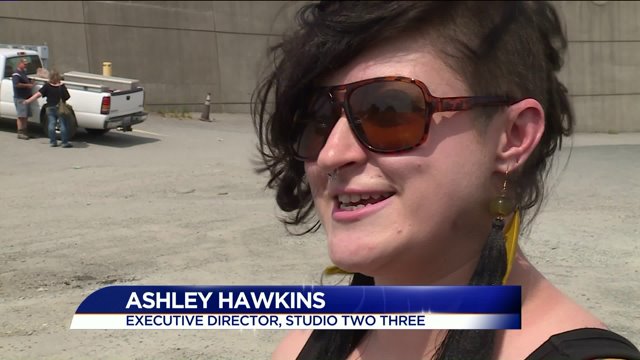 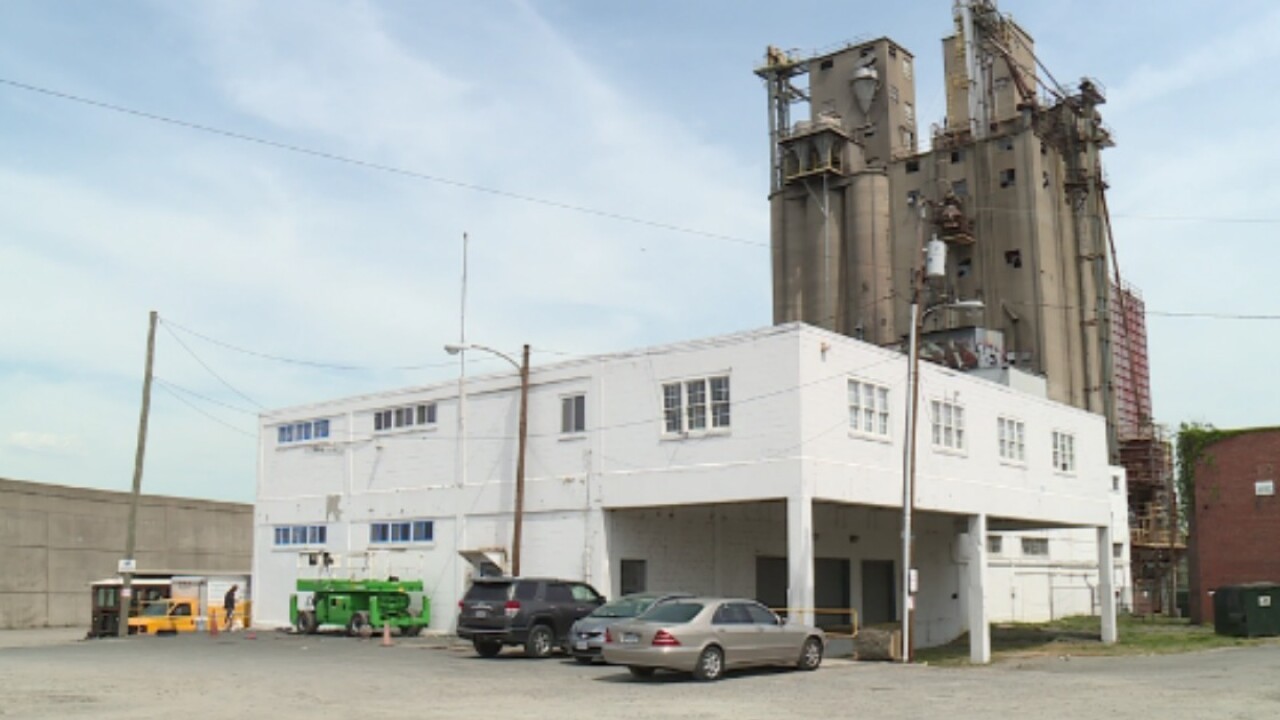 RICHMOND, Va. – Artist Ed Trask is out at the moment, picking up a fellow artist who has flown into Richmond for the third RVA Street Art Festival, so organizer John Mills can’t say exactly how many gallons of paint they’ve bought for the event – only that thousands have been spent.

Mills does know that the paint will go towards transforming a city space; the base camp for this year’s event is at the Southern States silos,  which Mills said he and Ed “have always been infatuated by.”

The objective is harmoniously threefold: raise money for children’s art programs, beautify a city space and spotlight local artists. There isn’t a branded theme to the three-day festival, which kicks off Friday, April 22, but Mills said the focus is about “bridging Manchester to the city.”

The silos stand sentry over Manchester, just behind the floodwall and an expanse of the James River, as you head south from downtown on the 14th Street Bridge. Across the street is Floodwall Park.

The floodwall snakes through the area, and about 300 yards out from the silos there is a park many people probably haven’t heard of – Walker’s Creek Retention Basin Park.

“We are bringing awareness to the park,” Mills said.

Mills and crew have been cleaning up the park, which will serve as a temporary place for art and sculpture, with an open invitation to the public to participate – as long as their art is removed by 9 a.m. on April 25.

“In Manchester there is so much opportunity culturally and financially, and we need more people to pay attention to it,” Mills said. “If we could come to such an iconic landmark and transform it then we could call more attention to the space.”

Southern States silos serves as headquarters, but festival will spill out into Manchester neighborhood

The main base for the event is at the silos, where there will be eight to 10 walls within the property to paint. Esteban De Valle, an artist visiting from Brooklyn was at work Tuesday, prepping the walls.

Storage containers and trailers have been brought to the space and will be painted. A huge wall fashioned out of old doors will serve as the wall for community contributions.

The festival will spill out into the neighborhood, Mills said, with the help of Fountainhead Properties, the main sponsor.

“They have been unbelievable in helping us find new spaces,” Mills said and added that their help meant more local artists could be invited to participate.

There have been no shortages of artists to participate, as Richmond becomes well known internationally for its street art scene – between the Richmond Mural Project and the Street Art Festival.

“We gained a lot of awareness and recognition with the bus depot,” Mills said. “Over the last year or so we’ve had more contact from people around the country and artists from around the world…artists contact us saying they want to come paint.”

National and local artists behind murals and sculptures

The first RVA Street Art Festival in 2012 transformed an old power plant along the Canal Walk, and the second in 2013 took a vacated 5-acre building and turned it into an outdoor art gallery.

“The curation process is basically a combination of people sending us requests and us sitting around the table talking to Ed Trask, who does the main curation,” Mills explained. “We take a little bit of time to decide who stylistically works together.

“The crazy part is the scheduling,” he added. “Trying to get who we want on a particular weekend is the hard part. We can never get everyone on one weekend.”

Walker's Creek Basin Park will be transformed by sculpture

“Thinking of sculpture as a way of community engagement,” is how Garland described it.

Visitors will have to keep their eyes open for the elements.

Thomas Burkett will host a Post-Environmental Center along the Manchester canal, in the tiny brick building with big windows.

Plantbot Genetics will be hosted in a trailer within the park, by Jeff Schmuki and partner Wendy DesChene.

Jennie Fleming will lead a walking tour of Manchester’s architecture.

Lynn Cazabon will have an installation out of the little silo across Hull Street, on the floodwall, which will detail native plants.

Garland’s project documenting the Slave Trail will be visible in the park. And he has designed the People’s Record of Richmond, where guests can record into microphones their thoughts about the trail and race relationships.

Brown distributing will provide the craft beer options and Richmond’s food truck troops will be on site, with lots of options.

The marketplace will feature Richmond artisans and the steamroll printing will be in effect again this year.

Market and food vendors will donate a percentage of sales, and all proceeds brought in from vendor sales over the weekend will go to Art on Wheels, Art 180 and Studio 23 programs.

Mills estimated that 12,000 people attended the last festival, and projected 15,000 – 20,000 for this year’s event – which will likely share the crowd from Saturday’s Earth Day event hosted by Style Weekly.

“We need community support,” Miles said, “whether you donate online, buy beer or food – it goes to the lifts, paints and art programs.”