Behind The Veil: Q & A with head brewer Matt Tarpey

RICHMOND, Va. – It’s less than 48 hours until the opening of The Veil Brewing Company, the newest in the Scott’s Addition lineup and the first of five breweries or cideries slated to open in the historic district this year.

In the monstrous backroom of the beautifully restored building at 1301 Roseneath Road, Matt Tarpey, head brewer and co-owner of The Veil,  cuts a stark shape among towering tanks and stacks of cans to be filled.  He’s focused on all the last touches to be done before an anticipated crowd of 2,000 people show up on April 16.

His vision has taken shape over the past year – from decorating to logo and liquids — and soon Richmond gets to sample the concoctions of a man whose brewing pedigree is lauded by beer aficionados.

“He’s just so authentic,” said co-owner Dustin Durrance, who had not tried Matt’s beer before. “It’s not like I was sitting around drinking his homebrew, we just believed in him.”

“I was relieved,” he said of the first batch they tasted.

The 11,000 square foot building, accessorized with a parking lot of the same size, started as the offices for a Coca-Cola plant, and then became Unity Baptist Church.

Don’t expect cornhole, growler fills, games, trivia nights, or televisions at The Veil. Do expect people who want to talk about beer and give you really good, high gravity products. In the first year, Tarpey hopes to produce around 3,000 barrels; an American barrel of beer is 31 gallons. 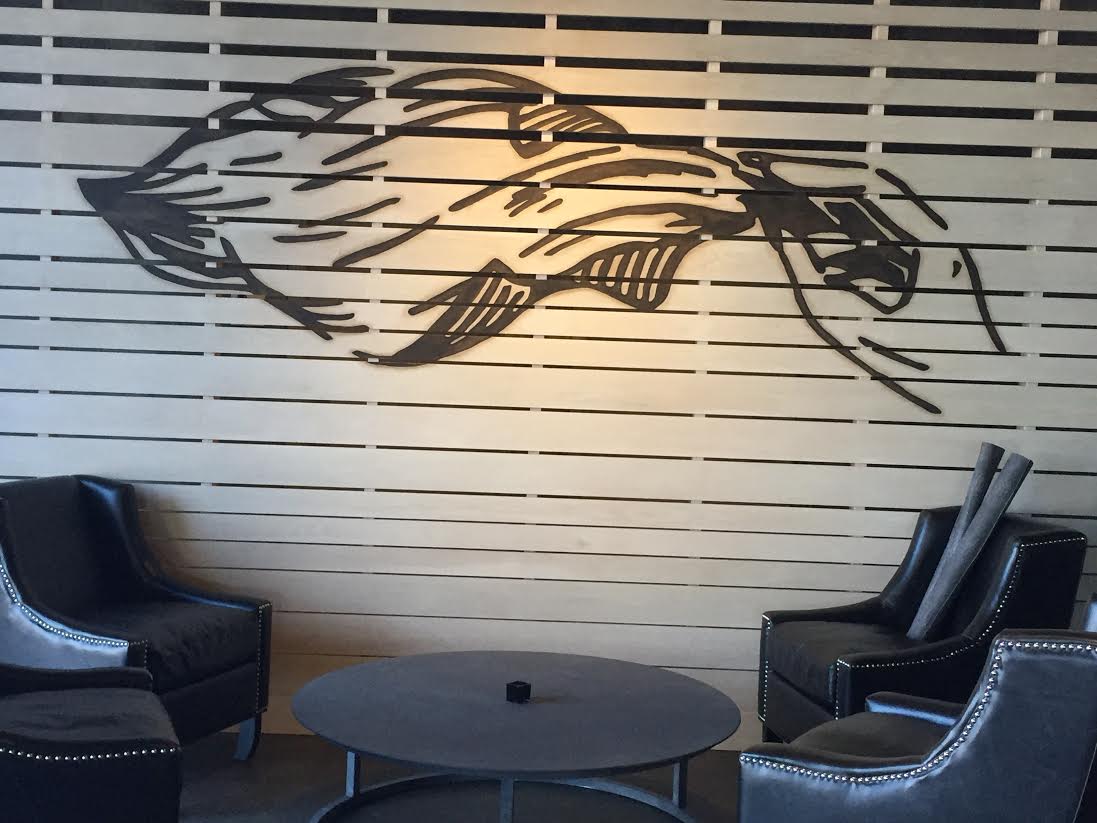 CBS 6: Are you from Richmond?

MT: I was born and raised in Rhode Island, and moved to Chesapeake, Va. at age 12 and spent the majority of my life in Virginia. Moved away in late 2011 to New England and I had been there until May 2015.

Why Richmond for a brewery?

A lot of my business partners are from Richmond. I’ve always loved Richmond. We all felt that the project would do better in Richmond than in Hampton Roads. It’s centrally located and it is just has a really cool food and beverage scene; we thought Richmond was the best fit for us.

I’ve heard that you have brewed at spots which have some of the most sought-after beers in the world.

I have WORKED at some of the most sought after places. I started at O’Connor in Norfolk, as a shift brewer. Then I moved to Portsmouth Brewery in New Hampshire, a well-known brew pub in New England, in 2012. I was a shift brewer there for just over a year.

Then I moved over to The Alchmeist, in Vermont, who makes Heady Topper , a world famous double IPA – I was a shift brewer brewing Heady Topper.  That’s the only beer they brew. Then after that, I was the direct assistant brewer to Sean Hill at Hill Farmstead in Vermont, for just under two years. And for the last three out of four, Hill Farmstead has been voted the best brewery in the world. And then I have also done two apprenticeships with Jean Van Roy at Cantillon in Brussels, Belgium (also considered one of the best in the world.)

The Veil was originally supposed to open in November 2015, what happened?

Demolition started in August 2015 and wrapped up in April 2016 – less than 10 months. That’s actually pretty impressive considering we gutted this building; considering we cut out the wall for the garage doors. It was just the woes of construction.

They always say whenever you plan on your project being complete, add six months to it. Whatever you think your budget is going to be double it. That was absolutely true for us.

The Veil’s namesake is connected to the brewing process, correct?

It has something to do with the spontaneous fermentation project of this brewery. We are going to do basically a lambic beer but it has to be from Belgium to call it lambic.

When I studied at Cantillon in Belgium to learn how to brew and learn more about the history and the process of lambic beer, I was one of two or three Americans to have ever studied under Jean who is the fifth generation brewer there.

The Veil logo that will go on local taps

It was my first time in Belgium and it was the first day I was walking around with Jean, it was early in the morning, 8 a.m., and we were walking around the barrel storage facility talking about spontaneous fermentation.

And through that process there is a protein-based membrane that grows on top of the beer that grows on top of the beer – almost like when you leave your pudding out too long –but not the same process, just for a visual. So we were talking about pellicles and we started talking about natural wines, which also undergo spontaneous fermentation, and Jean has a lot of friends in Italy that are natural winemakers and he told me that his friends in Italy call pellicles “the veil.”

That moment was very special and I just remembered it. You know how in a cartoon, someone says something powerful, and everything in the world stops….that’s how it was for me.

I didn’t know what the significance was for me or why it spoke to me at the time. It just spoke to me.

My business partners asked what I wanted to call it and I said The Veil. It’s not Richmond Brewing Company, Scott’s Additon Brewing. It has meaning, it has passion, it has heart. But it is also kind of catchy and dark and mysterious…it’s easy to say.

Talk about the grand opening on Saturday, April 16.

The grand opening is going to be an awesome, awesome event.

We are going to have three of some of the best food vendors, in my opinion, in the city. ZZQ, Stroop Dogs and Boka Tako.

We are going to have two live DJs, one from Richmond, and one from my hometown in Norfolk, a good buddy of mine. The DJ locally is Billy Crystal Fingers, from 5-7:30 p.m. and the DJ from Norfolk, LrdMrcy, will be on from 8 – 10:30 p.m.

We are also going to have a mural live on our shipping container, by Nils, a local street artist.

We will have limited edition merchandise. We will sell hand numbered, screen printed posters that will be sold for $20 and 100% of the profit goes to SCAN, the charity, Stop Child Abuse Now.

We will have really cool glassware and four-packs to go.

[Limits of beer will be determined by the line at opening. The point of sale service will keep track of inventory. You redeem the ticket in the tasting room, on your way out, so no one lets the beer get warm. ]

We are highly suggesting people hold onto their tickets. If you have a ticket you are guaranteed a four-pack.

Can to be filled with stout beer.

We have Master Shredder, which is a flagship beer for us, which is a wheat-based IPA, it’s 5.5%. It’s just amazing, aromatics – very citrus forward, definitely on the orange side. Not bitterness, no malt presence – just a clean, easy drinker but tons of aroma and flavor. Very hoppy but not bitter.

The second one is another flagship for us, it is called Crucial Taunt. It’s 8%, a double IPA. Again very citrus forward, no bitterness, almost no detection of the alcohol. It is very well hidden. It’s very crisp and really nice citruses’.

We have a very limited release Dull Fangs that is kind of a one off that we may never make again. It’s an IPA with Southern Hemisphere hops – Galaxy from Australia and Nelson Sauvin from New Zealand and we also added organic grapefruit to it.

The fourth beer we have is our anniversary beer, called Sleeping Forever, it is a 13% imperial stout and it is very-full bodied, not too acrid, it is very smooth, a little sweet but not so much sweetness that you can’t drink more than six ounces.

We are going to mainly focus on IPA. We will have at all times two to four IPAs.

The chocolate milk stout will be a flagship but may not be available at times.

What can people expect when they visit The Veil?

A unique experience, definitely in terms of aesthetic of the tasting room. A different experience, I want people to recognize – not saying that the other people are not quality focused – but I want to show people how quality focused were are and how much we care about the quality beer and product.

The tasting room has turned out amazing. The aesthetics are beautiful, and modern and in my opinion unlike any other tasting room in the area. There is lounge seating, friendly staff clearly designated as being staff members. Just a different experience that I think everyone is going to love, or at least appreciate.

Do you have any spring beers for people to get excited about?

It’s brew whatever we want when we want and that’s how we like it.

We have 16 taps but will probably never have 16 beers on at any time but we wanted to have the availability to do so. On average we will have between five and eight, maybe 10. Later on if we have vintage beers, or when our spontaneous fermentation is ready…

This way we have the capability to double up if there is a ton of people in the tasting room.

We also have a filtered water tap, I have been to a lot of establishments, not just to specify breweries, but I will go to get a glass of water and they grab a tepid pint glass and fill it from the hand sink under the bar and then I have this tepid tasting water in a warm glass and it impacts my palette when I am trying to have a beer and it also is a poor presentation, in my opinion, so it is always clean, crisp and flavorless – with a good presentation.

Then we have a nitro draft that we are working with Lamplighter on, so we will always have nitro coffee cold brew on draft.

There will be food trucks on weekends and on weekdays there will be pre-packaged charcuterie and cheese plates from the Barrel Thief.

What do you love about beer and what is your favorite variety?

It can be pretentious but we are doing our best not to make it pretentious.

My favorite type of beer are traditional lambics. That is actually a reason I doing the spontaneous fermentation project, not just because I think it will be cool for Richmond – because I do – but a big reason is just so I can drink. I’m dead serious. It’s probably 90%.

I said that was the last question but I lied. I always do that. I really always have more questions. How did you get the internship with in Belgium?

And I just asked him if I came over there if he would accept me as an intern and it’s funny, on my first day there, he said to me “you know Matt, there are hundreds and hundreds of people who ask me to do what you are doing – over the phone, through email, Facebook – and every single time I tell them no. I have no idea why I said yes to you, but you are always welcome here. ‘

That was very powerful to me, and that is why I went back a second time. I am going back for a third time in December. Pay my dues, and show my respect for the history.