Fire units responded to a home in the 2100 block of Hill Street after getting a call from a neighbor about explosions around 3:30 p.m.

That first blast was so intense neighbors said it rumbled their floors and shook their cars.

Witnesses said the smoke from the explosion could be seen two or three blocks away.

Additionally, one witness said the smoke was so thick and black that it cast a shadow on the ground.

Fire crews, who arrived just moments after the blast, said it took about an hour to get the blaze under control.

Fire officials said the woman who lives at the home was out of town visiting family when the blaze broke out. Thankfully, she had taken her dog with her.

Since her husband's death about six years ago, she has lived in the home alone. Family members said she is most concerned about photos that were likely lost in the blaze. 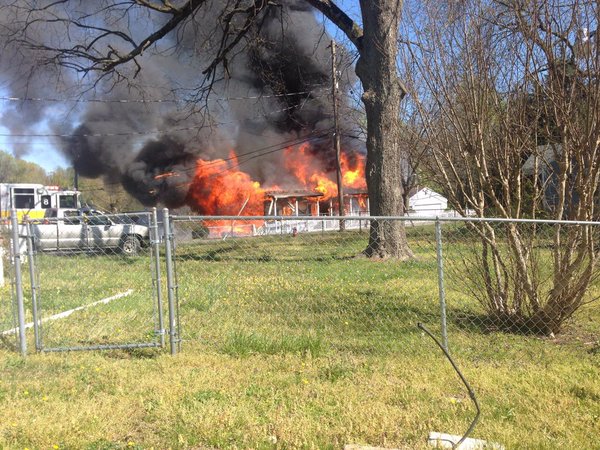 Crews said they have a solid handle on what happened.

"The home is heated with propane.  That would be the only ignitable type of gas that is present at this residence,” Asst. Chief Chesterfield Fire John Boatwright said.

Officials later confirmed a leak in the propane tank sparked the fire.

That propane tank that shot completely through the home is now in pieces on the opposite side of the house from where it normally sits.

WTVR CBS 6 has a crew on the scene. Stay with WTVR.com and watch CBS 6 News after "Elementary" for Jake Burns' complete report on this developing story.

Check out before-after of explosion in Matoaca. Witnesses say they felt the "boom" from more than a mile away @CBS6 pic.twitter.com/3a9JvTGCTR

Crazy explosion in Matoaca. This is aftermath. I'm told homeowner WAS NOT home. Thank the Lord. @CBS6 pic.twitter.com/rZF33dYx7R