Richmond Police reaching out to community as city violence rises

RICHMOND, Va. -- Richmond Police are pushing their crime fighting initiatives in the community, well aware that violence is up in the city.

Through April 5, the city has 19 murders, up from five at this point last year.

Police said they're trying to arm the public with information, before things get any worse. They listened to a quick briefing Tuesday before taking off in groups throughout the Randolph neighborhood.

From the Command Staff to patrol, officers pounded the pavement in the city's Randolph community, with hopes of arming the public with preventative information.

"We need the community’s support and I think they understand that we can't do it alone," said Durham.

Initiatives such as “Gun 250” are spurring much discussion. That program is a partnership with Crime Stoppers to get illegal guns off the streets and from the clutches of violent criminals.

"It's anonymous and pays to recover a weapon,” said Durham.  “If a citizen calls that tip in and we confiscate gun or make an arrest, we pay 250 bucks."

The city's murder rate is nearly four times what it was at this time last year, which Durham calls an alarming trend. But Richmond isn't the only city seeing a spike.

"A lot of regions on the eastern seaboard are dealing with an increase in homicides and gun violence," said Durham.

The violence is not only a concern for police, but also anti-crime movements like United Communities Against Crime (UCAC) and Mothers Against Violence. They're holding a citywide violence prevention workshop this weekend, trying to intervene with faith instead of firepower.

For more information about the weekend workshop click below. 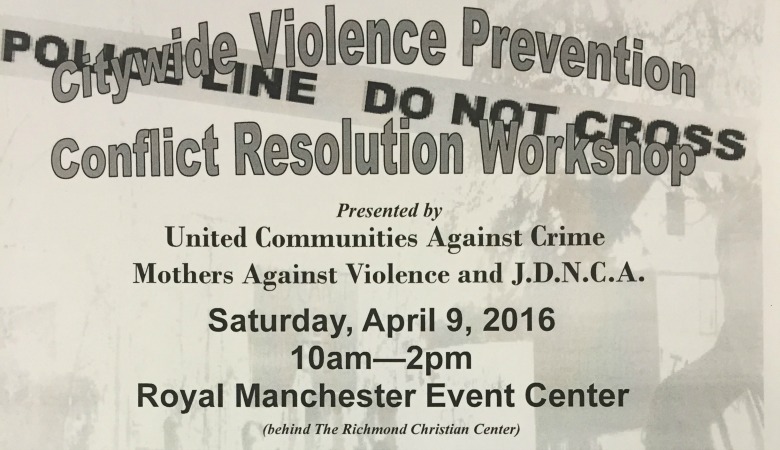 "They say it's going to be a bloody summer, but I counter that with the need to train and educate folks on how to resolve issues without guns,” said Charles Wilson, with UCAC.

Durham reminding folks that 220,000 eyes are better than the police alone: if you see something, say something.

Submit tips to GUN250 about persons illegally possessing guns by texting Crime Stoppers at 274637, then using keyword “GUN250” followed by your tip. Rewards up to $250.