RICHMOND, Va. -- A Virginia State trooper who was shot when a suspect opened fire at a Greyhound bus station in Richmond Thursday afternoon has died, according to Virginia State Police.

The former Marine is from Jackson, Michigan and was assigned to the Hampton/Newport News area.

Virginia State Police spokeswoman Corinne N. Geller said four people, including the suspect, were shot when troopers were called to the bus station in the 2910 N. Boulevard at 2:45 p.m.

Geller said a trooper, who was already at the station, met a man just inside the entrance. Geller said the trooper was talking to the suspect when he pulled out a gun and shot the trooper.

Geller said two nearby troopers returned fire on the suspect.

The trooper, two civilians and the suspect were transported to VCU Medical Center. 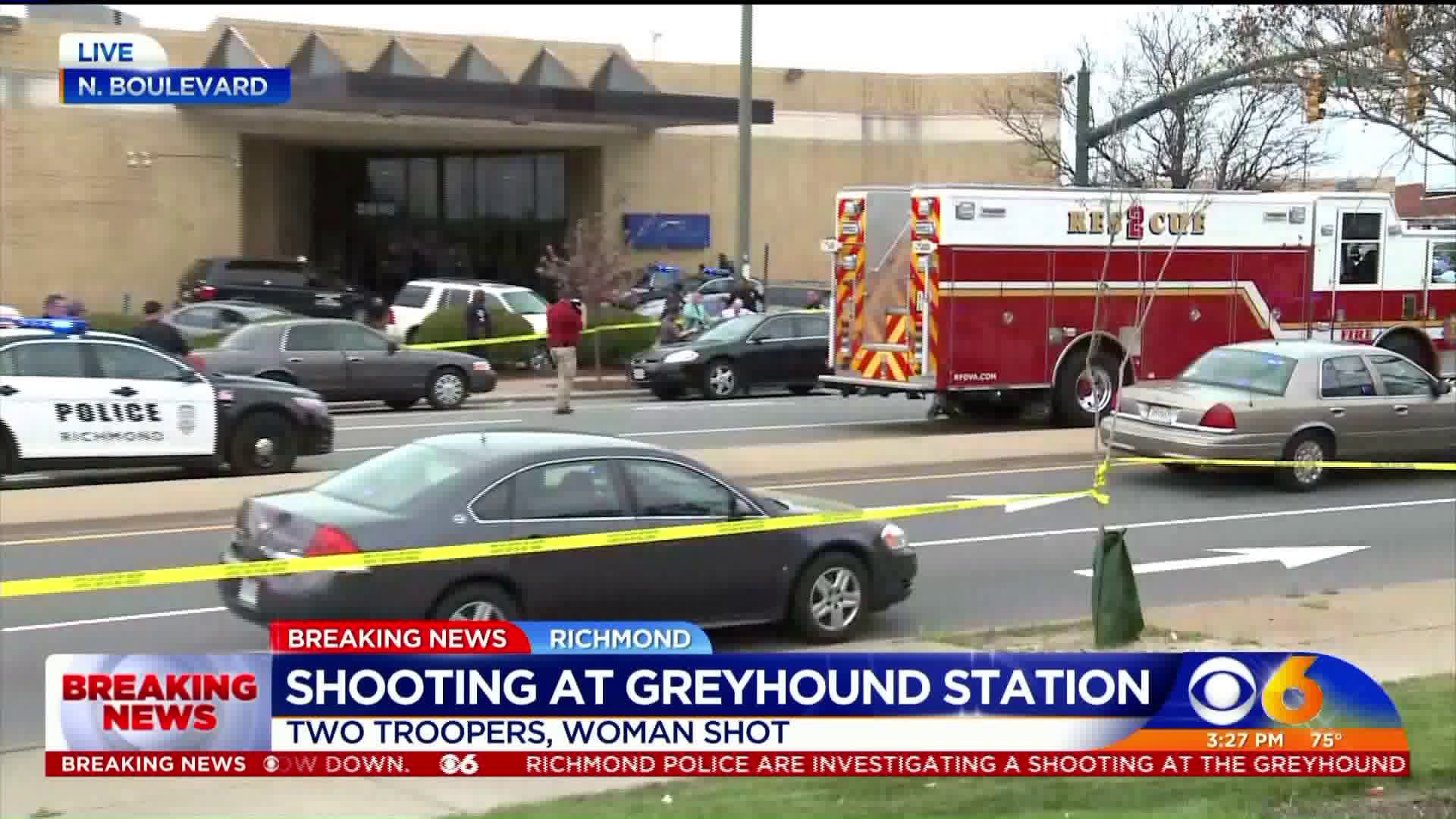 A man who stopped for a smoke break before going into the bus station, said he heard at least five to ten shots fired.

As a result of the incident, the Boulevard is closed between Robin Hood Road and Leigh Street.

Greyhound tweeted that the bus station was closed until further notice.

We are fully cooperating with the authorities and providing any information they may need, including video surveillance that was captured.

We’re unable to confirm the number of injuries at this time. However, no employees were injured.

Our station has been evacuated and we are offering counselors to not only assist our employees, but customers that were at the station as well.

We are re-routing inbound schedules to our Richmond garage until further notice. If you are scheduled to travel today to or from Richmond, we will work with you to re-issue tickets for another time.

"We will re-route customers as possible and we will re-issue tickets once we resume service if you are supposed to travel to or from Richmond today," the company stated.

The bus station is across the street from the Diamond baseball stadium.

“Virginia State Police have confirmed that there were four people that were shot during today’s incident. A Virginia State Trooper has sustained life-threatening injuries. The shooting suspect is deceased.

“This is still an active investigation and a very fluid matter. Virginia State Police are going to need time to verify and validate all of the information.

“Richmond Police Department officials are fully engaged and are acting in a supporting role. Governor Terry McAuliffe and I have spoken and are sharing resources and information. We are all heartbroken by this occurrence and our prayers go out to all those that have been affected by this incident.”

Man About to Walk into Station Saw Muzzle Fire

WTVR CBS 6 crews on the way to the incident spotted 30 to 40 police cruisers speeding to the scene.

When reporter Jon Burkett met a man who said he almost walked into the unthinkable.

“My girlfriend dropped me off,” he said. “I decided to smoke a cigarette out front before I got into the bus station.”

WTVR CBS 6 News has multiple crews on the scene. Scroll down for a stream of updates as events unfolded. Depend on WTVR.com and CBS 6 News for complete coverage of this developing story.

Richmond Police telling people to go inside. Told me not to go any further @CBS6 #rva

Officer just asked us to move back. Said he didn't know what kind of weapons "they" had inside @CBS6 #rva #greyhound

RPD Chief Durham confirms at least one down at Greyhound Station. Scene is active. @CBS6

We're told shooter may be contained. At least 3 down, possibly including Trooper.

Mark Holmberg was inside police tape for a minute. Says Somebody opened fire inside Greyhound station @CBS6 #rva

VSP: 3 wounded, including 2 troopers and a female civilian at Greyhound Station shooting. Shooter in custody. No longer active scene @CBS6

Per VSP: 2 troopers and one female civilian transported to hospital @CBS6 #RVA

Sources tell @CBS6 that the shooting suspect is dead

Witness eating at #Richmond #Greyhound shooting "I heard rounds of shots and dropped by chicken sandwich and ran" pic.twitter.com/yxsQ3r1Eft

Sources say one of the state troopers shot at the Greyhound bus station in Richmond has died https://t.co/I6lH1vOfMQ pic.twitter.com/bWPIC4B5J3

VSP says suspect approached trooper, they were in a conversation and the suspect drew a gun and opened fire. Troopers returned fire. #cbs6

Total of four shot: only one trooper being treated for life-threatening injuries and two victims being treated. Suspect dead #cbs6

VSP says trooper was dressed in "BDU's" and was "identifiable". #cbs6

That trooper is in critical condition. The suspect is dead per VSP @CBS6 #RVA