Tuna recall expands to include Chicken of the Sea, Hill Country Fare

“These deviations were part of the commercial sterilization process and could result in contamination by spoilage organisms or pathogens, which could lead to life-threatening illness if consumed,” the companies said in separate statements.

No illnesses have been reported in connection with the recalled tuna.

“During a routine inspection, it was discovered there was a malfunction in a machinery part. That part has been replaced, and the proper functionality of the machine verified,” said John DeBeer, vice president of Quality and Compliance for Chicken of the Sea.

Open the photo gallery below to see which cans of Chicken of the Sea are recalled: 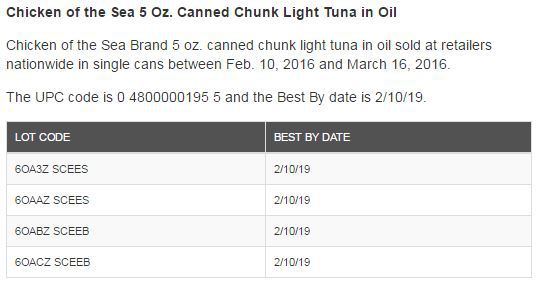 Bumble Bee is recalling 31,579 cases of the canned tuna with UPC codes 8660000020, 8660000021 and 8660000736. They were produced in February 2016 and distributed nationally. The company said they could pose a possible health risk because of “process deviations” which occurred in a packing facility not owned or operated by Bumble Bee.

“The recall is being initiated out of an abundance of caution due to the possible under-processing of the affected products,” Bumble Bee said.

Consumers who have recalled products from these respective companies should throw them away. Those who want more information about reimbursement or have questions about the recall can contact Bumble Bee at 888-820-1947 and Tri-Union Seafoods at 866-600-2681.

Bumble Bee is working with the co-packer and the U.S. Food and Drug Administration to remove the products as quickly as possible, it said. Tri-Union Seafoods issued the recall to ensure the highest level of safety and quality, it said.