WASHINGTON — Canadian Prime Minister Justin Trudeau’s Thursday visit to the White House has the administration beaming even as American presidential candidates are bashing a central pillar of U.S.-Canada ties.

Trudeau’s trip is expected to yield announcements on the environment and border security and cover shared security challenges in the fight against ISIS.

The 44-year-old leader’s arrival marks the first official visit by a Canadian prime minister in 19 years. The schedule will involve a special level of pomp and circumstance to signal White House pleasure that after nine years of conservative rule, its northern neighbor now has a like-minded leader in office.

“The new prime minister would fit almost perfectly in the Democratic Party alongside the American president,” said Michael Byers, a professor of international politics at the University of British Columbia.

Trade and climate change will top the agenda, according to White House officials. And though Trudeau pledged on the campaign trail to downgrade some of Canada’s presence in the Middle East to fight ISIS, he has expanded collaboration with the U.S.-led coalition, earning the Obama administration’s appreciation.

President Barack Obama’s top climate envoy, Todd Stern, said the administration is eyeing a reduction in methane emissions as one potential takeaway from the visit. Administration officials also hope to make progress in resolving a long-running dispute over lumber imports into the United States. 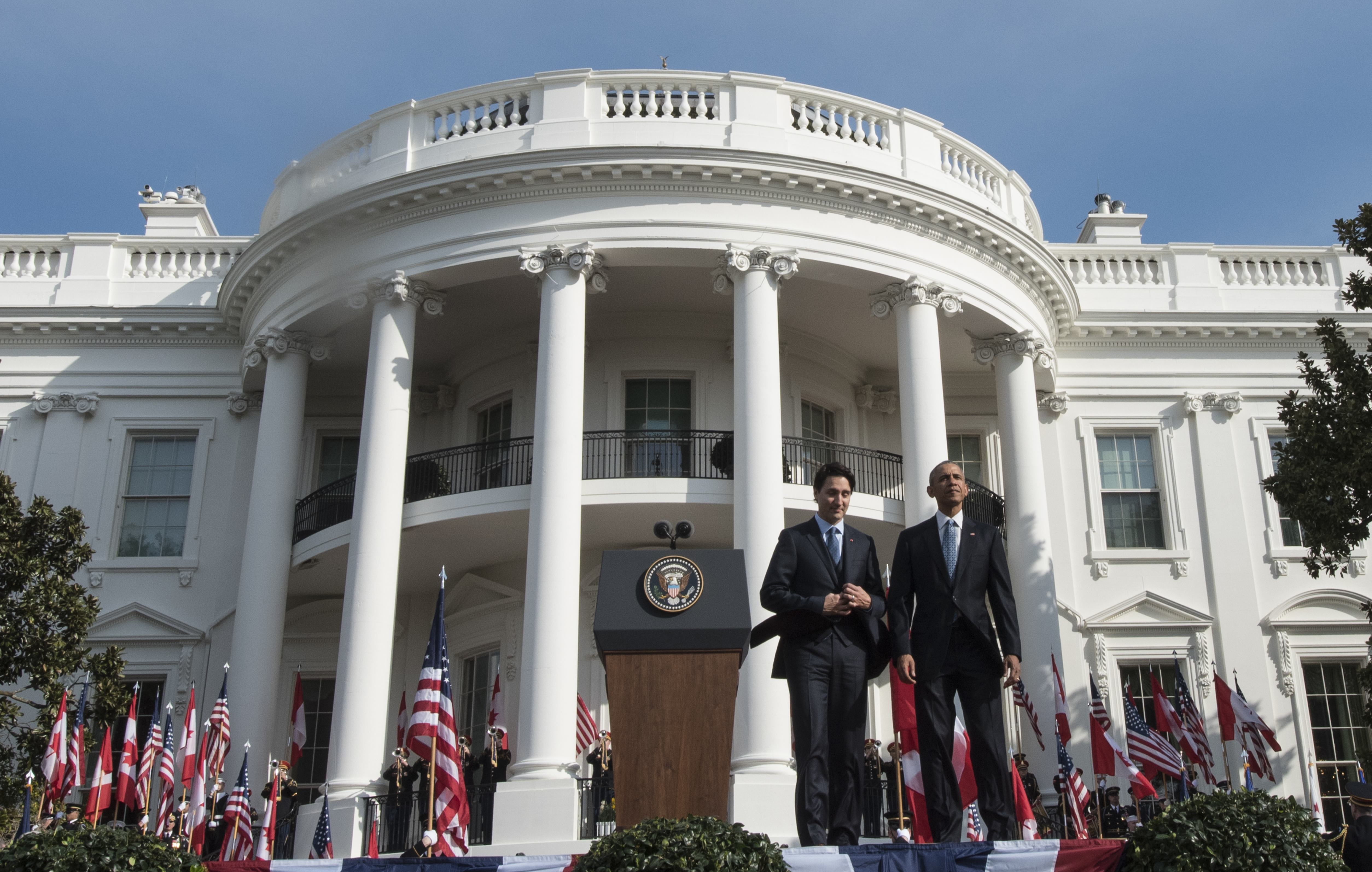 Mostly, the White House is seeking to underscore what they regard as deep similarities between Obama and Trudeau.

Shared values and interests haven’t prevented tensions, though. Republican and Democratic presidential candidates have ripped into the North American Free Trade Agreement, which sets the rules for free-flowing trade between the U.S., Canada and Mexico.

Republican candidate Donald Trump called NAFTA “a disaster” in a September interview with CBS, vowing that after his victory the U.S. will either “renegotiate it, or we will break it.” And he continued to hammer away on trade leading up to Michigan’s primary Tuesday.

Even Obama has attempted to distance himself from the deal, which he noted last year was under negotiation when he was still in law school. In promoting the Trans-Pacific Partnership trade plan, Obama has pushed back on suggestions that it is simply a newer version of NAFTA, saying “that’s not the trade agreement I’m passing.”

“To see NAFTA become anathema and have the candidates distance themselves from their largest trading partner is very worrying” for Canadians, said Laura Dawson, director of the Canada Institute at the Wilson Center, a Washington think tank.

Canadians want to update the agreement to reflect whole realms of business that weren’t covered in the accord, such as e-commerce.

But it’s not expected that Obama would be willing to engage in NAFTA discussions as he works to gain support for his own trade plan before he leaves office. And focusing on NAFTA wouldn’t help Clinton, who is now disassociating herself from a deal she supported when her husband, then-President Bill Clinton, signed it into law.

“Because the word NAFTA is political poison, it can’t be updated” right now, said Dawson.

There are other trade issues also at play over the three-day visit. Trudeau, who took office in November, will wrestle with President Barack Obama on thorny issues including a disagreement on softwood lumber.

The U.S. is reluctant to renew a 2006 agreement that came under attack from U.S. lumber producers who said Canadian timber was unfairly subsidized. The deal expired in October 2015 and if it’s not renewed by this October, Canadian producers could pay new tariffs.

Even so, the Trudeau-Obama bond is already widely seen as an improvement over relations between the Obama administration and former Canadian leader Stephen Harper.

Their ties ground down over opposing views on several issues, including the environment and climate change — particularly expansion of the Keystone XL pipeline that would have ferried oil from eastern Canada to refineries in the U.S.

Obama rejected the proposal in November after a seven-year review, citing climate change concerns. Harper, from oil-rich Alberta, had vociferously championed the pipeline, and didn’t share Obama’s climate change concerns. In contrast, though Trudeau would have preferred the deal, it hasn’t been a cornerstone of his agenda or his posture toward the U.S. and he and the White House are more in line on many other environmental concerns.

The political chasm between Harper and Obama manifested in a number of ways, “most notably in the almost complete freezing out of Obama’s ambassador to Canada,” Byers said. “He could hardly get a meeting with a government official during his last six months in Ottawa.”

There was some concern in the U.S. about cooperation with Canada in the Mideast when Trudeau won in part on his campaign pledge to pull Canadian fighter jets from the fight against ISIS. That was quickly put to rest.

On February 8, Trudeau announced Canada would send more military personnel to northern Iraq and increase its intelligence efforts in the region, contributing an aerial refueling aircraft and up to two manned aerial surveillance planes.

Trudeau’s commitments, good through March 2017, “are very much in line” with the needs of the anti-ISIS coalition, she said.

Trudeau’s pledge boosted Canadian military personnel on the ground to about 830 people who will help with operational planning, intelligence and targeting.

Some of those Canadians are “training the Kurds how to paint targets for laser-guided bombs,” said Byers of the University of British Columbia. “They’re actually designating targets — it’s as close to a combat role you can get while still calling yourself a trainer.”

The nature of the work means they “will almost certainly take casualties as a result,” he said.

Security closer to home is likely to be the focus of one agreement Trudeau and Obama are expected to announce during the visit: an arrangement to share exit and entry information on American and Canadians crossing the border, according to U.S. officials.

And an agreement on climate change and the environment — a priority for both men — is also expected.

“The commitment of both leaders to addressing this global challenge is clear,” Stern, the climate envoy, said Tuesday, referring to climate change. “And I suspect under their leadership, North America will make significant progress this year and next.”