APPOMATTOX, Va. -- One person was killed and seven others hurt when a EF-3 tornado tore through the Evergreen and Red House communities of Appomattox Wednesday, February 24. The 1,200-foot-wide tornado touched down at 3:29 p.m. with wind speeds as high as 165 miles per hour. It carved a 13-mile path of destruction and damaged more than 100 homes and buildings.

Shelters for Appomattox families in need were opened at the Appomattox Community Center, located at 220 Community Lane in the Town of Appomattox and the Pamplin Fire Department, located at 2394 Pamplin Road. A Help Line was also established for residents at 434-352-2637.

“I’d been watching the weather... and they said it was a tornado headed toward the community of Evergreen,” storm survivor Jimmy Womack told WTVR CBS 6 senior reporter Wayne Covil.

Womack then called his 85-year-old mother, who lives next door, and told her to come to his house since he has a basement.

"And she said she was afraid to come out of the house," he said. "I walked to my back door and looked out and I could see the funnel coming."

By that point it was too late, so he told his mother to lay face down in the hallway and cover her head as he ran for the basement.

Womack said what happened next lasted for about 30 seconds and sounded “exactly like a freight train coming” as glass shattered and trees toppled above.

When he emerged from his basement, he noticed his garage, camper and mother’s garage were gone. The family's three vehicles were also damaged.

"I was catching this out of the corner of my eye to as I was running to her house to make sure she was ok," he recalled.

"Her roof is gone and I stepped up in what was left of her house and asked if she was ok."

Amid the devastation, he heard his mother's voice.

Womack said the damage is incredible, but that he and his family are very lucky.

“It’s unbelievable," he said. "You can’t explain it. You have to see it to believe it.”

Womak said he believes his house is salvageable, but that depends on what the insurance company decides.

“From what I’m understanding, the neighborhood behind me is a whole lot worse than this.”

In his 66 years in Evergreen, Womack said he has never witnessed anything like this before.

“Everybody in my family is ok," he said. " We’ve got some people behind us that are missing.” 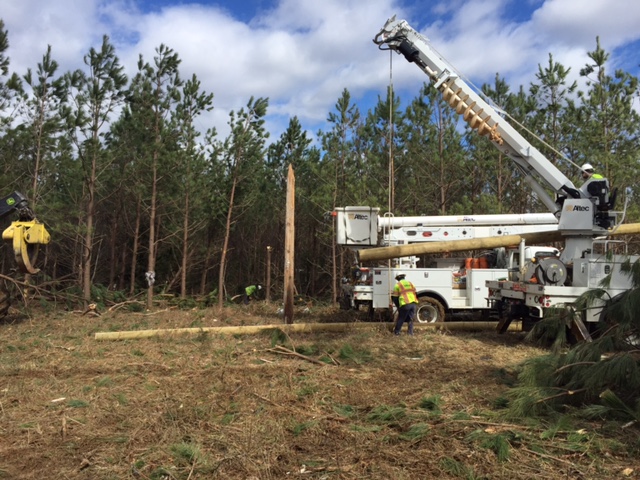 Virginia State Police said 78-year-old Edward K. Harris was killed when he was thrown from his mobile home in Evergreen.

Officials said his wife was among the seven people injured. Five of the victims were treated and released, but two remain hospitalized with serious injuries.

State police said at least 100 structures were damaged when the tornado sliced an 8 to 10 mile swath of destruction along Route 460 through Evergreen and Red House.

Neighbors spent Thursday gathering salvageable belongings from the 20 homes destroyed in the county.

As of Thursday afternoon, officials said all residents in Appomattox County had been accounted for.

Michael Jarrell has a nickname for the community he lives in, now devastated by an EF-3 tornado.

"We always call this place the big E. It's going to take a while before evergreen gets back."

Winds from up to 165 miles per hour ripped homes from their foundation, downed power lines that cut the electricity to thousands of people, and twisted tree tops from their trunks.

His trailer used to sit on the lot right next to Jarrell's.

"He was a really nice guy. If you needed any help he was always there for you. I talked to Mrs. Harris a while ago. She said 'I’ve lost everything.  I've lost my husband.' she's very devastated and heartbroken."

That is an emotion many are feeling in Appomattox.

But resilience, that's up there too.

"It's just Appomattox strong, power of one. So when it affects one, it affects us all," said Denise Ferguson, who grew up in evergreen.

Joanne York, whose home was missed by the tornado by 1/2 mile, agreed.

"We’re all strong.  I think we will.  Everybody is willing to help out. It's going to take some time, but we'll pull through."

The National Weather Service in Blacksburg  confirmed the EF-3 tornado touched down near Evergreen. Officials said the twister was on the ground for 13 miles and was 400 yards wide and had wind speeds estimated between 136 and 165 mph.

The tornado damaged 100 homes and structures, including one that was described well-belt brick home in Evergreen before ending just west of Holiday Lake State Park.

If you have storm damage photos, click the "submit your photo" button below.