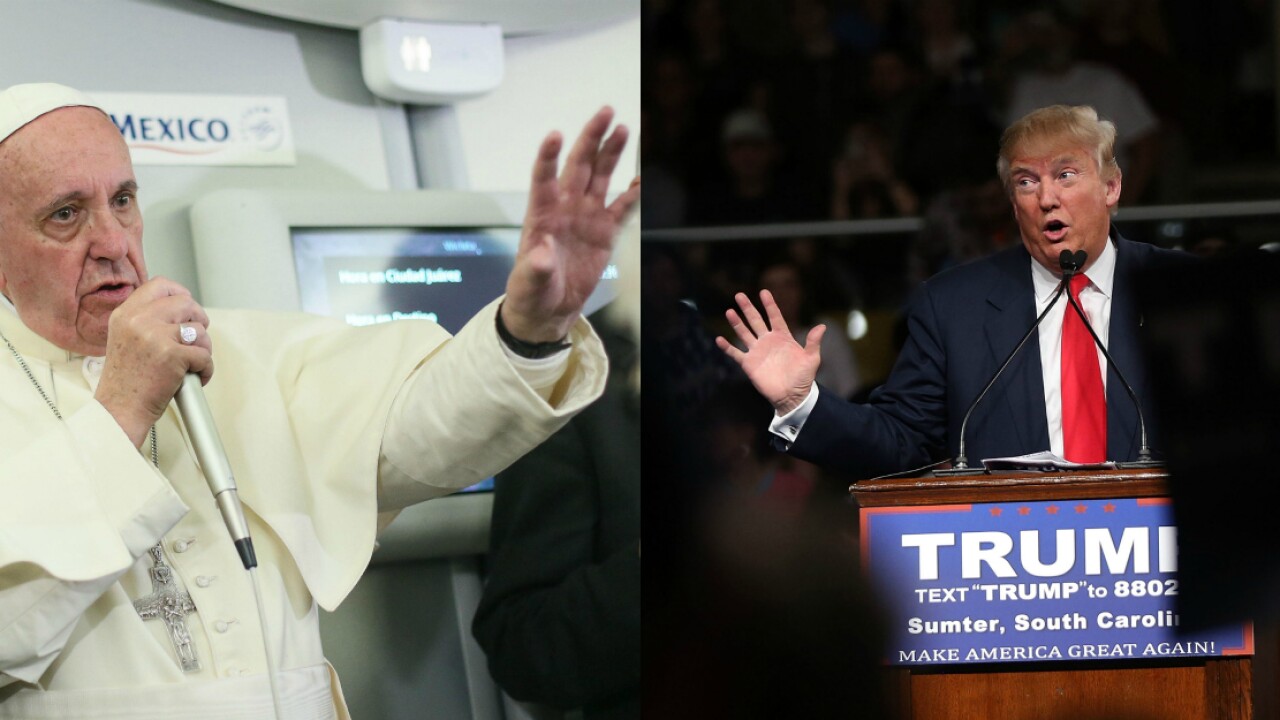 WASHINGTON — Republican presidential candidates offered a range of reactions to Pope Francis’ suggestion that Donald Trump is “not Christian” based on his immigration policies.

Following a visit to Mexico, Pope Francis criticized the Republican front-runner on his desire to build a wall between the United States and Mexico to prevent illegal immigration.

“A person who thinks only about building walls, wherever they may be, and not building bridges, is not Christian. This is not in the gospel,” the Pope told journalists who asked his opinion on Trump’s proposals to halt illegal immigration.

Florida Sen. Marco Rubio said he did not hear the comments, but said keeping Americans safe is the federal government’s number one obligation is safety.

“As a Roman Catholic, he’s the head of the Church, he’s the successor of Peter — is what I believe — and I have tremendous respect and admiration for him,” he told journalists. “I haven’t seen his statement, but I’m an elected official in the United States of America in the federal government, and our number one obligation is to keep people safe and our immigration system is a part of that.”

“There’s no nation on earth that’s more compassionate on immigration than we are,” Rubio added.

Former Florida Governor Jeb Bush, who is also Catholic, would not dismiss Trump’s Christianity based on his desire to build a wall, but criticized his immigration policy.

“I think his Christianity is between him and his creator. I don’t think we need to discuss that,” he said. “As related to his policy relating to ISIS, he’s not the right guy to be Commander-in-Chief.”

“I respect the Pope. His voice will be heard. But dealing with ISIS, we need someone who has a steady hand and a strategy,” he added.

Bush said supporting a wall “where it’s appropriate” is not necessarily “an un-Christian thing.”

“Across the board we ought to have a strategy to protect our border. That is clear,” he said. “But that is not an un-Christian thing to do to make sure that people don’t come across our border illegally. That’s a just thing to do.”

Ben Carson said he “would not personally judge” another person’s Christianity.

“While everyone is entitled to their own opinions, I would not personally judge whether or not someone is a Christian. I am a strong Christian myself, and as such do not pass judgments on others’ personal beliefs,” he told CNN in statement.

“No leader, especially a religious leader, should have the right to question another man’s religion or faith,” he said in statement. Trump added that the government in Mexico, where Pope spent the past five days, has “made many disparaging remarks about me to the Pope.”

“If and when the Vatican is attacked by ISIS, which as everyone knows is ISIS’s ultimate trophy, I can promise you that the Pope would have only wished and prayed that Donald Trump would have been president,” Trump added. RELATED: Trump thanks evangelicals for their support Reactions came in to the Pope’s comments came in beyond the campaign trail.

“We’ve noted on a number of occasions that a number of those values and priorities are not shared by Mr. Trump,” Earnest said.

“I will however extend to Mr. Trump the courtesy he has not extended to the president and not use this opportunity to call into question the kind of private personal conversations he is having with his God,” he added.

“.@Pontifex calls for compassion for immigrants and respect for all humanity while @realDonaldTrump denigrates women, Mexicans, Muslims,” he tweeted.