An underfed but overly cute sea lion cub is getting a lot of TLC after it waddled into an empty upscale California restaurant without a reservation.

The staff of The Marine Room in La Jolla on Thursday snapped some shots of the sick little female cub who slept on a booth, hopped about and gazed at the surf through a window.

The pup “was a little bit early for (the) high-tide breakfast reservation as it is this weekend on Sunday and Monday,” quipped executive chef Bernard Guillas on his Facebook page. 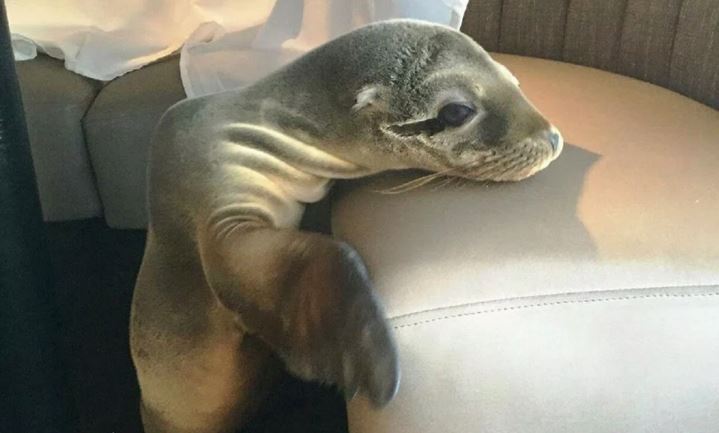 A SeaWorld team was called to the restaurant to pick up the malnourished sea lion. According to some reports, it may have made its way in overnight through an unlocked door. SeaWorld said the cutie likely sought food and shelter from a higher than normal tide.

“This pup weighed 20 pounds when we rescued it,” said SeaWorld’s Jody Westberg. “It should be about 40 to 50 pounds out in the wild right now.”

SeaWorld said it is cautiously optimistic the sea lion will recover and be returned to the wild.

The federal government last year reported a record number of sea lion “strandings.” An official said warmer weather than usual drove food sources farther out or deeper into the ocean, where the colder water is. When food is farther away, the mothers are away from the pup too long in search of food, and return with little food or too few nutrients for a growing sea lion.