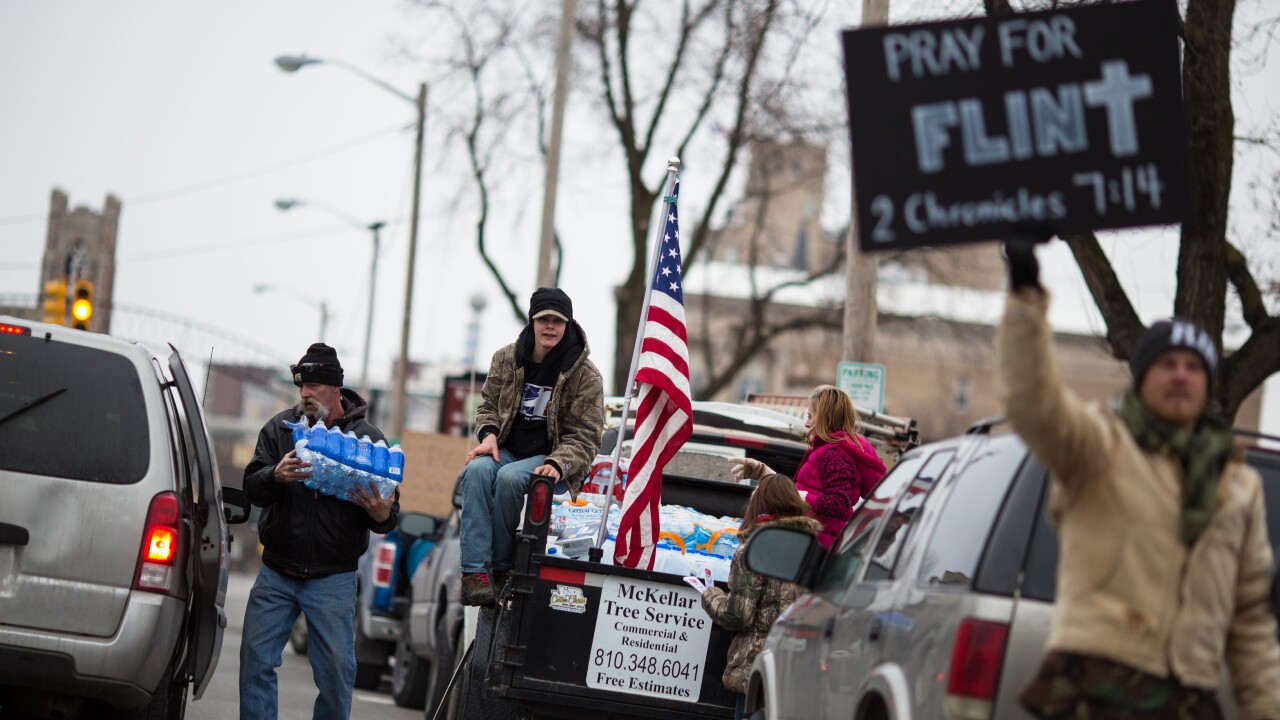 FLINT, MI – JANUARY 24: Protestors hand out water to Flint residents during a rally on January 24, 2016 at Flint City Hall in Flint, Michigan. The event was organized by Genesee County Volunteer Militia to protest corruption they see in government related to the Flint water crisis that resulted in a federal state of emergency. (Photo by Brett Carlsen/Getty Images)

For nearly two years, the simple act of having a glass of water has been fraught with danger in Flint, Michigan.

On Wednesday, policymakers 500 miles away started delving into why that’s the sad truth, who is to blame and what can be done about it.

The U.S. House of Representatives’ Committee on Oversight and Government Reform focused on Flint’s water crisis, one that multiple lawmakers characterized as a failure of government on all levels — local, state and federal. The hearing’s stated purpose was generally “to examine the ongoing situation in Flint” and specifically “to review the Environmental Protection Agency’s” actions to date.

In his opening remarks, committee chairman Rep. Jason Chaffetz introduced several documents suggesting that EPA officials had not acted quickly enough in Flint in the face of numerous warnings, some of them from inside the agency.

But he didn’t reserve his critiques only for those in federal agencies. He also called out Darnell Earley, who was Flint’s state-appointed emergency manager between 2013 and 2015.

Earley’s attorney, A. Scott Bolden, told CNN Tuesday that the subpoena “borders on nonsensical” and claimed his client needed more time to prepare and travel to the nation’s capital.

Chaffetz promised another Flint hearing in the coming weeks, and he insisted Earley will be there.

“We’re calling on the U.S. Marshals to hunt (Earley) down and give him that subpoena,” he said.

Rep. Elijah Cummings, the committee’s top Democrat, thanked Chaffetz for arranging the hearing but challenged him for not calling on “the most critical witness of all,” Michigan Gov. Rick Snyder, to testify. The Republican governor appointed Earley and — since the state had taken control of Flint due to its budget woes — ultimately was in charge throughout the crisis.

“We need to determine how children in the United States of America, in the year 2016, have been exposed to drinking water poisoned by lead,” an impassioned Cummings said. “And not by accident. By the actions of their own government.”

Once a bustling industrial city, Flint has fallen on hard times in recent years. These financial troubles led to the state’s takeover in 2011, when Snyder appointed his first emergency manager. State officials were in the lead in April 2014 when Flint’s water supply was switched (as a cost-cutting measure) from Lake Huron (via Detroit’s water system) to the Flint River, despite the fact that river’s water was 19 times more corrosive, according to researchers from Virginia Tech.

It didn’t take long for residents to suspect something was wrong. Water out of Flint taps looked, smelled and tasted funny. Yet officials indicated that nothing was wrong, with Flint Mayor Dayne Walling even drinking his city’s tap water on local TV to try to calm early concerns.

In fact, something was very wrong.

Chaffetz entered several emails into the record suggesting that EPA officials realized there was a problem from the spring through the summer of 2014, yet did little about it. Snyder has said the EPA and his state’s Department of Environmental Quality “missed” what was happening, and top officials from both agencies — including Susan Hedman, who resigned last month as the EPA’s administrator for the region that includes Flint — have already lost their jobs.

It wasn’t until last September that authorities began to take the issue seriously. A month later, they reversed the earlier decision by switching Flint’s water supply back to Lake Huron.

But by then, in many ways, it was too late.

Flint residents had already drunk tap water tainted with lead that, according to the Mayo Clinic, “can severely affect mental and physical development” in children and can even be fatal at high levels. As the Centers for Disease Control and Prevention notes, while exposure to lead isn’t good for anyone, “no safe blood lead level in children has been identified.”

Then there’s the damage to water pipes throughout Flint, a city of 100,000 people. In a letter earlier last month to President Barack Obama, Snyder estimates it would cost $767,419,500 to replace Flint’s water system — a long, costly process that some think is necessary because, without it, residents there couldn’t get clean water.

These costs don’t include what it will take to pay for water bottles, filters and residents’ water bills. Then there are the lawsuits that have been filed, including a new $100 million suit filed Monday on behalf of four people who allege they contracted Legionnaires’ disease at McLaren Regional Medical Center. Last month, the state noted a spike in Legionnaires’ cases in and around Flint, though one official claimed the increase could not be directly attributed to the water switch.

While Snyder OK’d $28 million in state funds and there’s a bill before the U.S. Congress to provide much more, Wednesday’s House Oversight Committee hearing was not focused on paying to fix Flint’s water crisis. It was about finding out what happened, who was responsible and how to make sure it doesn’t happen again.

“My objective is: never again in America,” U.S. Rep. Brenda Lawrence of Michigan said, lamenting how a state that touches four Great Lakes could have residents without clean, fresh water. “We can fix this, but we have to have those who made the decisions to come forward and give answers.”

The U.S. Department of Health and Human Services said Wednesday that federal agencies have made “substantial progress” in responding to Snyder’s requests. Those actions include water testing, improving government communications, physical and mental health planning to cope with the ramifications of tainted water, and adjusting federal programs so residents can get more needed assistance.

Several Michigan officials — from Flint, in state government or part of the state’s congressional delegation — have worked hard to get federal assistance, while acknowledging they’ll likely have to spend more money themselves. Snyder told reporters on Wednesday that he’ll propose another “significant investment” in Flint next week.

The current plan is to add phosphorous to the water supply to recoat the corroded pipes, then give the OK for people to drink from the tap again. (An infrastructure overhaul would come much later.) As to when it’ll be safe to drink from Flint taps, the governor said, “I hope it is sooner rather than later … but we’re going to base this on science.”

Snyder conceded state officials “made a huge mistake in terms of lack of common sense” in their analysis and actions related to Flint’s water after the Lake Huron switch. As the state government’s leader, he acknowledges that makes him ultimately responsible.

Still, Snyder has resisted calls to resign. And while welcoming investigations on all levels, he wouldn’t commit to testifying before the House Oversight committee.

“I haven’t been invited,” he said Wednesday. “If that comes about, then I’ll seriously look at that issue.”