‘The needs are not being met,’ School Board member asking Mayor for $18 million

RICHMOND, Va. -- School Board members told CBS 6 falling ceiling tiles, and overcrowding in schools is just some of what they've been dealing with in Richmond.

To help meet some of Richmond Public Schools' needs, City Council agreed last Spring to set aside $18 million for school planning and construction.

However, School Board member, Kristen Larson said the Board is still waiting for that money to be released.

"The needs are there and every day that passes the needs are not being met," said Larson.

Larson said former School Board Chairman, Don Coleman hand-delivered the letter to Mayor Dwight Jones' office in December, detailing how they planned to spend the money. 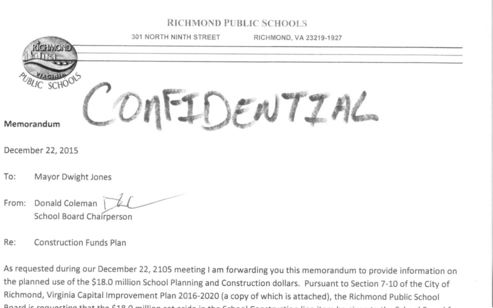 The letter discussed the design of the new Greene Elementary to address growth in student population.

It also stated the money would be used for demolition of the former Elkhardt Middle School and begin site work.

School Board members told CBS 6 falling ceiling tiles, and overcrowding in schools is just some of what they've been dealing with in Richmond.

"I think it's unfair to the taxpayers that the money hasn't been released yet, because there's a pot of money sitting there that we have known projects that it could be used for," said Larson.

Councilman Parker Agelasto said he questioned why the money hadn't been released at a finance committee meeting on January 21. He said the administration said they wanted, in writing from the board, an outline of how the money was to be spent.

Agelasto then forwarded the December letter to City Administration.

Days later, and more than a month after Don Coleman's letter, the Mayor responded to the Board's plan.

Jones stated he was prepared to release the funds, but had several concerns about the spending.

The letter from the Board laid out two options for how the money would be used, but Jones said it didn't say which option the Board agreed on, and is requesting the School Board vote to clarify how the funds will be used.

"What I don't want to see happen is this continue to play out over the next couple of months and this fiscal year ends and we haven't done anything," said Larson.

Larson said the Board is getting a presentation from Dr. Bedden and his team next Monday, February 8, regarding the Capital Improvement Plan for this year and the future.

CBS 6 reached out to Mayor Jones' office Tuesday afternoon for comment regarding the letter sent, as of late Tuesday night we had not received a response.