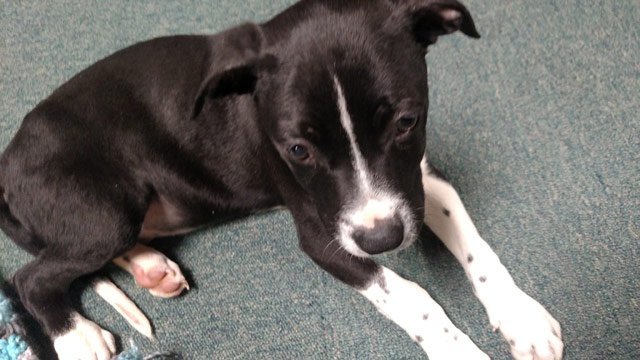 GAFFNEY, South Carolina — Elizabeth Mashburn was enraged when she saw a photo of a puppy dangling from his leash on Facebook, according to WHNS.

The post above the puppy read: “Got him for my daughter she don’t want him.”

Asking price for the pit bull was $50.

Mashburn with Lucky Pup Rescue said she met the man who posted the image on Facebook and paid him the amount on Monday.

She and her husband, Matthew, said the puppy, who they named Walker, was bought from a breeder and given to the man’s daughter as a Christmas present. But she did not want the dog.

Elizabeth thought Walker might not make it after they picked him up. Running your hand over his sleek coat, one can feel bones, and his belly is protruding.

The Mashburns say Walker is severely dehydrated, malnourished and has worms.

They said he will be placed with a foster family and taken to a veterinarian for treatment.

In the short time that they’ve had him, the couple say Walker is “extremely sweet” and “very kissy.”