Three brothers graduated from the New York Police Department’s Police Academy on Tuesday, following in the footsteps of their father, a 30-year veteran.

Stephen Favale, 24, and twins Alec and John, 22, were among 1,123 new police academy graduates who donned NYPD blue at the ceremony at Madison Square Garden.

“We’re together all the time, and it’s always wonderful. I gotta say we have a great sibling relationship,” Stephen said. “It’s pretty amazing to see my family here and all of these people supporting everyone here.” 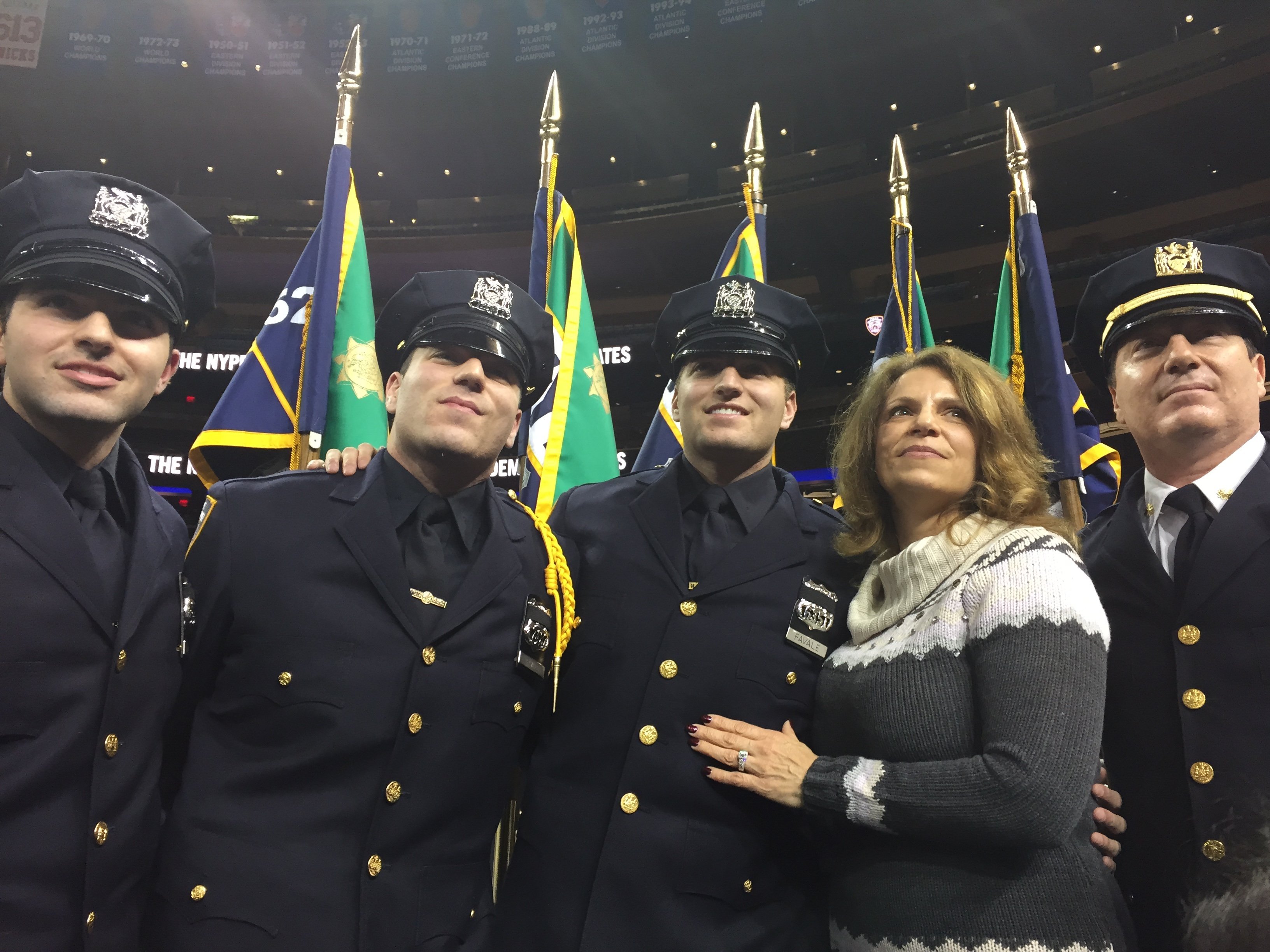 Their father, Anthony Favale, is an NYPD deputy inspector who joined the police force back in 1985. The Staten Island resident says he and his wife, Stephanie, are “overjoyed.” While they thought one of their sons might become a police officer, they never imagined that all three would.

“I’m still numb. Mathematically, for this to happen … we’re just overjoyed and we’re overwhelmed by the attention,” Anthony said.

Mayor: Doesn’t get better than this family

New York City Mayor Bill de Blasio noted that this is the first time anyone can remember a group of three brothers graduating in the same NYPD police academy class.

“There’s one family that we got to say a special thank you to, because talk about giving back to this city and serving this city — it does not get better than the Favale family,” de Blasio said.

Alec said they’re humbled and appreciative of all of the interest in their family but didn’t feel like they deserved the spotlight over any other Police Academy graduate.

“We graduated with more than 1,100 people, and you know, a lot of people that are qualified for this job, we’re no better than them,” Alec said. John, agreed, noting that they never expected this level of attention.

All three Favale brothers are college graduates, but only John Favale, who graduated in the top 10% of his class, has wanted to be a police officer since he was a little boy, according to his father. Anthony gave his son John his own patrolman’s shield as a gift.

His brothers Stephen and Alex studied business communications and finance respectively in college, but they both made the decision to enroll in the Police Academy as well after taking their father’s advice.

“I told them to do exactly what I did. This was my backup plan. I should have been a chiropractor, but I failed organic chemistry in college. I happened to take the police test, and I got a letter to come down and I did and my career has been very colorful, and just full of lifelong experiences that I couldn’t replicate anywhere,” Anthony said.

Ready for duty at Times Square

All three of the brothers will be on hand to provide increased security during New Years’ Eve celebrations in Times Square. Anthony said he is confident in his sons’ abilities, despite fears about terrorists targeting New York City.

“They’re good boys. … They never gave me an ounce of trouble growing up, and yeah, I have that fear, but just like every New Yorker has that fear, that you’re in a big city, big things can happen. So, I have all the confidence in the world, but as a father, you know, I try to compartmentalize that,” Anthony said.

“We’re at a time of a great national debate about police. You are going to be part of that debate,” Bratton said. “You are committed to serving and policing constitutionally.

“Under no circumstance can you ever break the law to enforce the law. You have taken a sacred oath.”

The December 2015 police academy graduating class is almost 20% female and has an average age of 26.

Some 46% of the graduates are white, 15% are black, 26% are Hispanic and 10% are Asian. Of the over 1,100 graduates, 95 have served in the military, 485 have bachelor’s degrees, 42 have master’s degrees, three have law degrees and two are working toward their PhDs. The graduates come from 49 countries and speak 64 languages.

“You are New York. You are a reflection of this incredible city. [Being a police officer] is the best damn job in the world,” Bratton said. “Enjoy it and don’t let us down.”