RICHMOND, Va. — The city of Richmond honored a woman who dedicated her life to preventing violent crime in the city. Mayor Dwight Jones and Councilwoman Cynthia Newbille unveiled a honorary street sign on the 1900 block of Princess Anne Avenue Monday to recognize Alicia Rasin, who passed away on October 9.

“She has been a pillar of the Richmond community for over 30 years,” Mayor Jones said. “If anybody deserves to have a street named after them, it certainly is our ambassador of compassion, Alicia Rasin.” 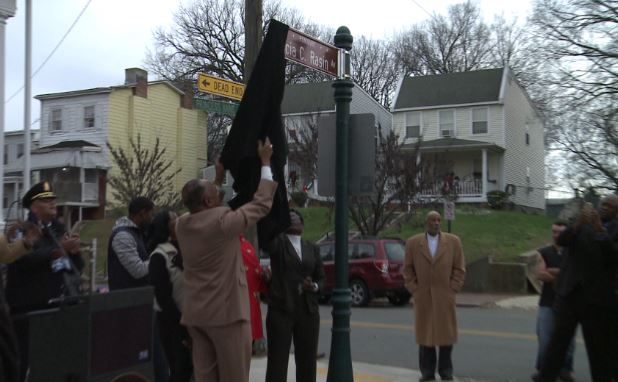 Rasin once said her mission was “to help anybody.” She founded Citizens Against Crime, an organization through which she and others collaborated with victims, police, businesses and residents to fight crime in some of the city’s toughest neighborhoods.

Rasin worked to help the families of homicide victims and others stunned by violent crime.  She helped arrange funerals, vigils and marches to try to help communities rally crime in their neighborhoods.

Jones said Rasin’s impact on the Richmond community was immeasurable.

“People would tell her things they wouldn’t tell anyone else, that’s because they trusted her. She was really a mother to the community.”

During Jones’ speech, he also spoke out against recent gun violence, including the murder of a 12-year-old girl Saturday, and called on the Richmond community to help.

“We speak out today on Alicia’s behalf today, to say a word against gun violence and the proliferation of guns are our communities,” said Jones. “I want to ask your help in making sure Alicia’s legacy live on by helping us spread the word, If you see something say something.”