RICHMOND, Va. — For all of the modern advancements in communication and the growing reliance on social media that dominates everyday life, there is still something to be gained from taking the time to sit and watch someone tell their story in a crowded room.

Storytelling traditions have found a solid foothold in Richmond with collectives like Secretly Y’all, a curated showcase produced by organizers Kathleen Brady and Colin King, that has been packing Balliceaux, the VMFA, and Ardent Craft Ales’ brewery in Scott’s Addition with eager listeners and all manner of emotions and experiences since 2010. 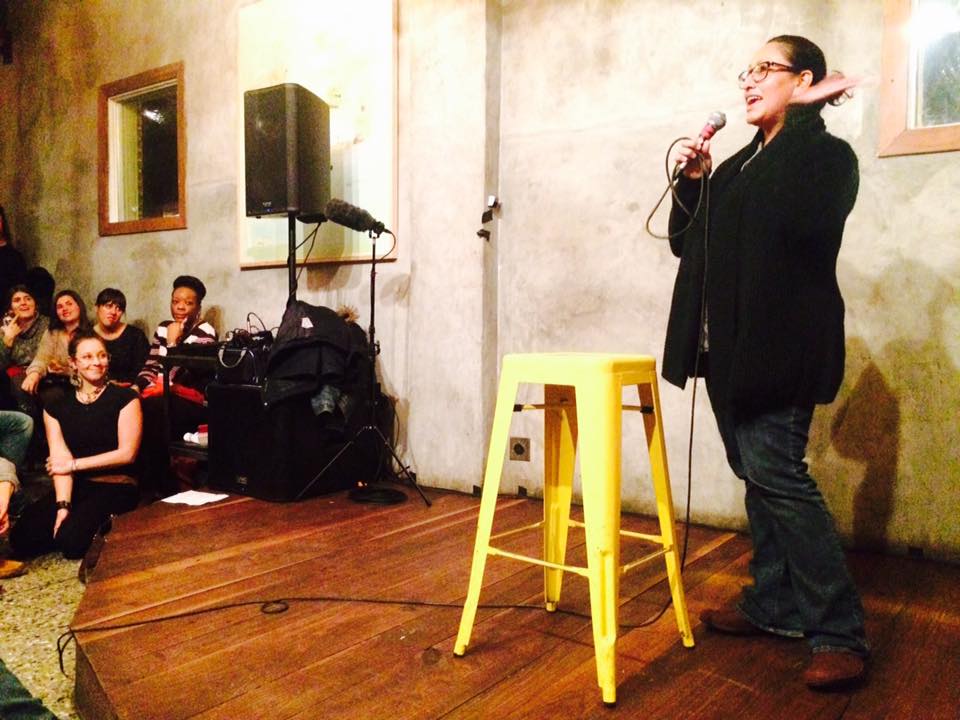 Monday night’s event, with the theme of “Through the Wringer,” drew dozens of listeners to Balliceaux on Lombardy Street to benefit LINC, a legal support network for cancer patients.

Every Secretly Y’all event gives the proceeds from a $5 entry fee to a different local nonprofit. WRIR 97.3, the Richmond Zine Project, Habitat for Humanity, and Tricycle Gardens are just a few of the groups that have benefited from past events.

Part of the appeal for many audience members is the ability to connect with charities that hold personal meaning for them.

“It was the first time I had ever seen that many people in a room, that had all simultaneously shut up at once and didn’t say anything for a couple hours … Everyone was just listening, so I thought that was kinda powerful,” J.M. Forehand, a frequent guest and speaker, said. “I told one story previously, and then tonight I wanted to tell a story just because LINC was our philanthropy. They do a lot with people that are suffering from cancer in the Richmond area, and that was something that resonated with me.”

Forehand lost one of his closest friends to leukemia. He never got to say goodbye, but a tattoo on his forearm, matching one his friend had, is a reminder that he’ll carry his loved ones with him after they’re gone.

Taylor Jones lost most of his sight recently in a car accident, and on Nov. 10 he ran the Richmond Half Marathon with Sportable, a Richmond organization that provides physically and visually impaired athletes with resources to compete and stay active.

“Being a part of what I’ve been through over the past year … whether it be my accident, running the half marathon, or being a part of a great sports organization, I feel so blessed that I feel like I have to give back, and spread the positivity,” Jones said.

“I really just tell other people,’you know what? It doesn’t matter what the doctors say, it doesn’t matter what people around you say.’ All that matters is what you believe in. If you’re positive, you really can do anything. I think my story really shows that to people. Just hearing my story, and saying that this happened to me less than a year ago, y’know, and I’m up here telling you about it now … It really is a blessing to share my story, and I feel like it needs to be shared.”

As everyone began to clear out of the room at the end of the night, one listener described the experience of watching people reflect on crazy moments or years of their lives as follows:

“Y’know, laughing while crying really is an amazing feeling.”

Anna Boutchard, who is new to Secretly Ya’ll, thinks the appeal of the event is peoples’ connections with the speakers.

Mishaal Abbasi, also a first time attendee, said that the event “really lacked diversity.” Still, she enjoyed the concept of speakers sharing short, personal stories, and is interested in the next event themed “Seeking Asylum,” which is scheduled for Jan. 11.

Secretly Y’all’s formula involves uniting common threads of perseverance, persistence, loss, irony between strangers in inventive ways. In June the organizers finished their handmade storytelling booth, which fittingly debuted for the day-long Bicycle Y’all event. An adult tricycle is trailing the booth, which is wired for recording audio and video anywhere that three wheels can carry them.

Secretly Y’all’s upcoming events are listed on the event website and Facebook page. There you can also find out how to submit your own story and which nonprofit it will benefit.

By Margo Maier and Allison Simmons
(Special to WTVR.com)