CHESAPEAKE, Va. -- At 8-years-old, David Spisak has been through a lot.

David was diagnosed with cancer when he was two. He's had two transplants, including one from his 10-year-old sister, and still his cancer has returned three times.

When he was diagnosed for a 4th time in March of 2015, David's parents made the decision to stop treatments and let David live as normal and happy a life as he can with all of the experiences an 8-year-old should have.

But one of those experiences isn't one that a typical 8-year-old has.

David found the love of his life.

In September, David started 2nd grade and he went to school for as long as he could before he could no longer attend. His mother says she knew he had a "crush" from his class, but she had no idea how serious their bond was.

"In art class, I told her I liked her and she just had a surprised face so we started dating," David says.

Once David was pulled out of school, all of the kids in his class sent cards home for him. His parents say that as they looked through the cards, they found quite a few from 7-year-old Ayla.

Ayla's cards stressed how much she loved and missed David. Even some of the other classmates' cards said how much Ayla was missing David.

When David's parents asked him about Ayla, he described her the best way he could.

"She kinda looks like Snow White," he said. "Actually, she is kinda like the real Snow White because she is so kind to everybody, especially me because she loves me."

David's mom Amber reached out to Ayla's mom, Angela, and together, they realized how important the connection was between the two of them.

"She`s definitely had an impact on his spirit, and I haven`t seen this side of him in a long time," says Amber Spisak, David's mom. "Certainly at 8-years-old, you don’t think that they’ll have a first love or a first kiss or a first date and it was just something that I accepted wasn’t going to happen. But it did"

Out of that bond came another first for David... and a first for Ayla -- their first date.

David called Ayla up and invited her to go bowling. He gave her a teddy bear and roses and he even got a little kiss on the cheek -- his first kiss.

During their "date," Ayla pushed David around in his wheelchair, helped him bowl and they shared pizza together. David also got out of his wheelchair and walked for the first time in a month that night.

"The best part was watching the way they just needed to be close to each other and their conversation never got shy or quiet. That was all they needed to be happy," Amber says. 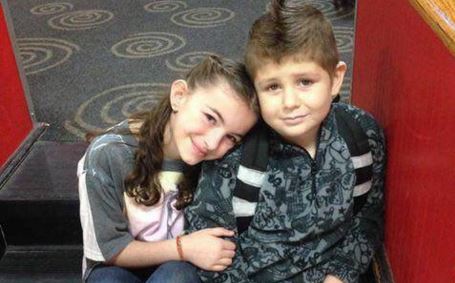