RICHMOND, Va. — Inspired by student activists at the University of Missouri, a group of VCU students and activists marched into VCU president Michael Rao’s office building Thursday morning to demand a more inclusive college environment from university leadership and faculty. 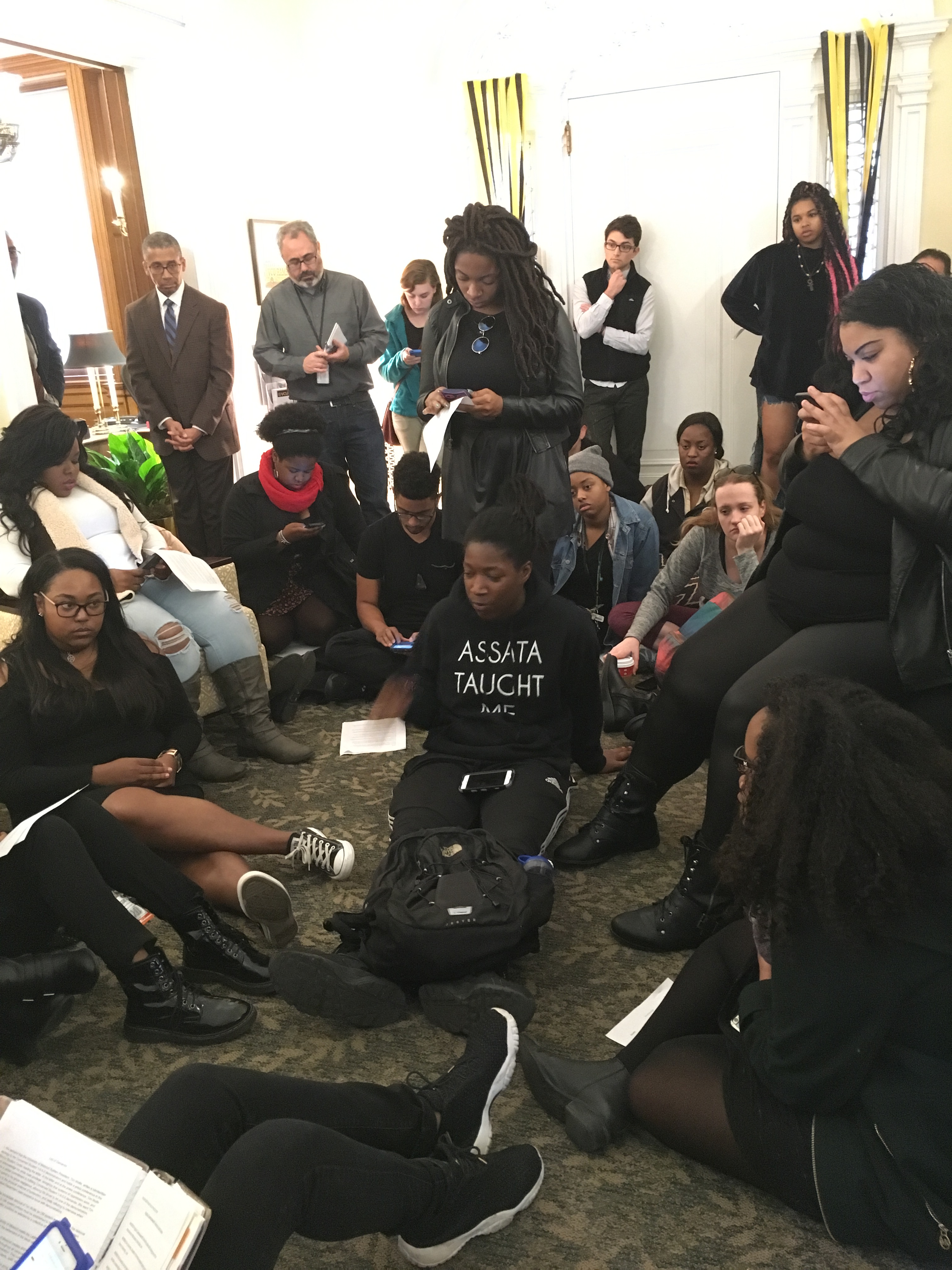 VCU senior Attalah Shabazz helped organize the sit-in in the lobby of the president’s office building on Franklin Street with around 20 students as well as a large rally on Wednesday with around 200 students at the Compass, the university’s central square. Shabazz read a letter to Rao that she and other black student leaders drafted to address the university and ask for a more inclusive and sensitive environment at what she called a “predominantly white institution.”

“As black students at a PWI located in the capital of what was once the Confederacy, what the black students at Mizzou are currently experiencing could someday be VCU if further progressive action is not taken,” Shabazz said when reading from the letter.

“None of us are free until all of us are free,” Shabazz had also said at the previous protest on Wednesday. “At the University of Missouri, what they’re dealing with, that could easily be us, black students at a PWI dealing with situations like that.”

In hopes for a more inclusive and sensitive environment, a list of 10 demands were directed by the protesters towards faculty, students and the campus climate. One of the demands for faculty included an increase in the percentage of black faculty from 4.7 percent to 10 percent by the academic year 2017-2018.

Another demand for students was to have a mandatory cultural competency and diversity training program to be included in the UNIV 101 introductory course as well as mandatory sensitivity and cultural training for faculty and staff.

The protesters also demanded for cultural student organizations and the Multicultural Student Center to be funded to meet the needs of the diverse student population and students of color. They also demanded that VCU aids in providing these organizations space so they can embrace their culture and affirm their identities.

Sheryce Holloway, executive producer for Fall Block, expressed concerns over funding being cut in half because non-black fraternities and sororities were not allowed to be in the competition, which celebrates black culture.

“That’s the only time black students at VCU get to celebrate their blackness,” Holloway said.

In an email to the VCU community, President Rao applauded students for the demonstration at the Compass and wrote that the university “must always stand together as one.”

To continue the discussion, there will be a presidential forum on diversity and inclusion at noon on November 18 in the University Student Commons. Rao said he and other university leaders will take a close look at the demands the students made. The students plan to have another meeting with the president in February to discuss the university’s progress.

“It’s good for me to be engaged in the conversation about how we can get ourselves to be more of a model of what the rest of the nation needs to do to embrace all human beings,” Rao said. “Particularly to pay attention to black human beings who today experience a life that is not what it should be.”

On Wednesday, around 200 VCU students had gathered at the Compass to show that they stand with University of Missouri students and against racism. Shabazz and others spoke to the crowd to alert them of the situation in Missouri. Sanders led the gatherers in a chant in order to show solidarity with the students in Missouri.

“I think it’s amazing, I think it’s inspirational,” Sanders said about the students in Missouri. “It’s heartwarming to see us standing up in such great numbers to make a drastic change that’s necessary for us and our culture.”

While Rao was unable to attend the rally on Wednesday, VCU administrators attended on his behalf such as VCU Police Chief John Venuti, Senior Assistant to the President Kevin Allison, Senior Executive Director Brian Shaw and Vice President for the VCU Division of Inclusive Excellence Wanda Mitchell. Mitchell commended the students for coming together in solidarity to voice their concerns for Mizzou and issues nationwide.

"When you see that there’s an injustice or you feel that our voice needs to be given to particular issues as a person matriculating in higher education, I think there’s an expectation that they need to give voice and speak on behalf of people who may not have a voice,” Mitchell said. “I always believe in the scripture “to whom much is given, much is required.”

Mitchell herself had family who were student activists fighting for change in higher education in the 1960s. While many of them are now retired, they have led school systems and non-profits “because they understood that injustice anywhere is a threat to justice everywhere.”

Former VCU student and campus pastor Vernon Gordon attended the rally at the Compass as well. Gordon said the demonstration was a great symbol of unity and solidarity, but there are still many questions that need to be answered.

“There’s starting to be a growing resentment among the African-American student body and among campus leadership, and I think those things need to be addressed or they can spiral out of control,” Gordon said.