The terrorist-inspired comic book features on the front a color rendering of three ISIS members beheading a man. The print read “ISIS: A culture of Evil. A true to life graphic comic book.”

Inside are cartoons that depict genocide, show people thrown off buildings, kids recruited, and women and children about to be killed.

The book also shows defenses against ISIS with air-to-surface missiles, a B-2 stealth bomber and questions if boots on the ground are next.

It ends by asking “Who will stop ISIS … before they stop you?”

“It’s a valuable piece for a lot of people that really don’t have a clue,” said publisher Wayne Bell in an interview with CNN affiliate WGCL.

“When 244 innocent citizens are knocked out of the air at 31,000 feet and plunge to the earth, the public begins to demand answers,” Bell wrote in a press release. “In this comic book you will find in pure black and white, some of those answers.” 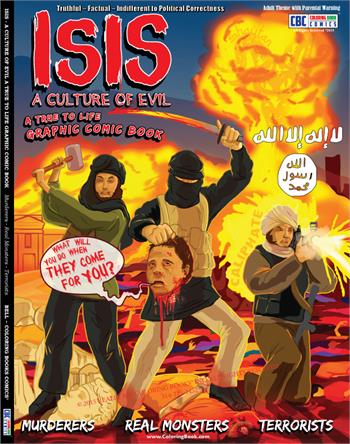 Bell said the book isn’t meant for children, but he said it could be used to inform kids if the parents chose.

“If a lot of parents, teachers and educators want to tell their children, that’s their choice,” Bell said to WGCL.

Bell told affiliate KDVR that every image comes from ISIS’ own website and feeds.

The description for the book, on the publisher website reads:

We show the truth as it exists in detail. We ask: Why and how does ISIS recruit? What will government leaders do? What will the political class do? What will leaders of faith do? What will you do should they come for you? ISIS is a real State with real consequences.

Terrorism is a human attitude designed to destroy other humans and to create a decline in society. The mind set of a terrorist is medieval. It is used to coerce, retaliate against and intimidate others. Some consider terrorism as a means to change political behavior in creating a state of fear and submission through murderous actions and deeds. The systematic terrorist wishes death upon those who support free speech, freedom of the press or people that support human rights. Through murderous jihad, hatred, evil deeds and death, terrorists think they can over-rule and destroy all who disagree with them. The radical terror Islamists ISIS will murder today, any Jews, Christians, Muslims or anyone they view as a threat to their Caliphate existence.

The book runs $8 to $5 depending on the amount purchased. It has already sold out on Amazon.