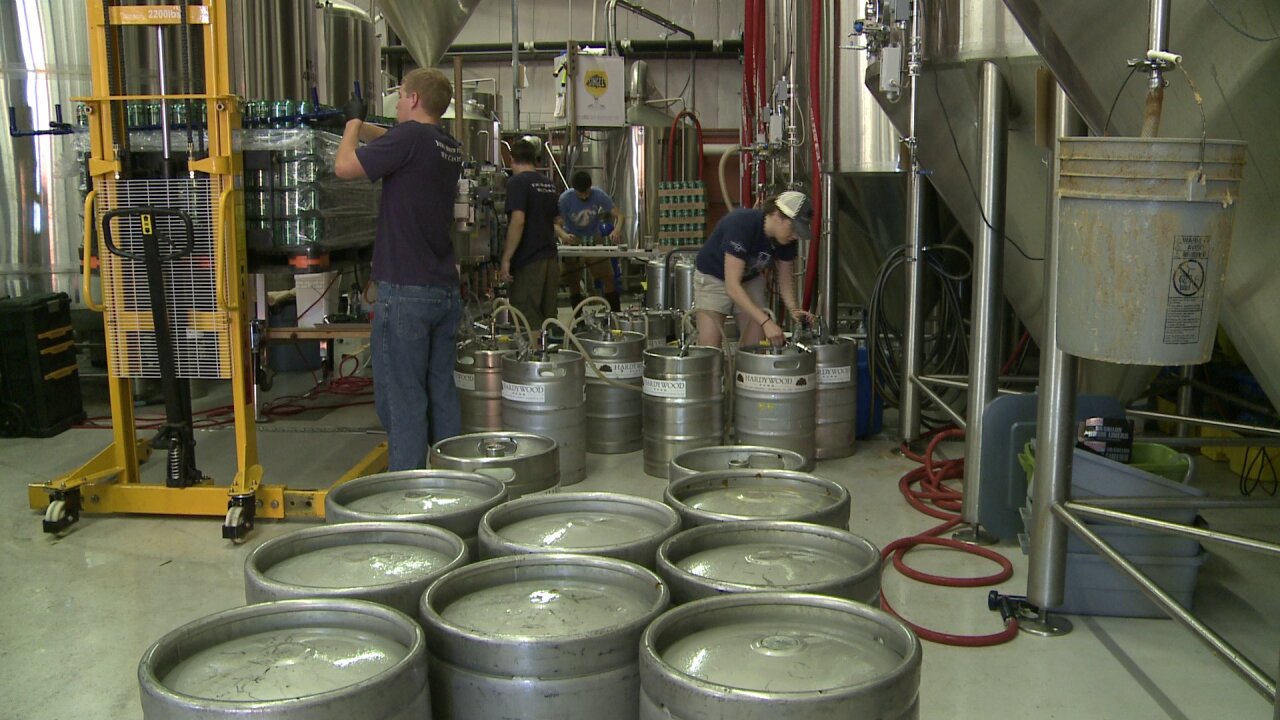 RICHMOND, Va. – It’s around 4:20 p.m. on Friday, just under four hours to go until Hardywood starts selling the 2015 release of Hardywood Gingerbread Stout, and people are already showing up at the brewery.

In 2012, it was tapped with a perfect score of 100 by BeerAdvocate magazine, and since then it’s only grown exponentially more popular.

It’s the beer people wait in long lines for, and in the past, have even been turned away empty-handed. And then there was that *sniffles* sad tragedy when over 1,500 gallons of Bourbon GBS spilled out, no thanks to a fermenting tank clamp.

This year, Hardywood said they are prepared and there has been a “major increase” in stock.

“We made quite a bit of this product,” said Matt Shofner, Assistant Hospitality Manager.  “I think they’ve impressed themselves [with the amount].”

At 8 p.m., Friday, Nov. 6, Hardywood will start handing out a total of 500 tickets. Each person with a ticket can buy up to 12, 750mL bottles. Shofner confirmed that means they have 6,000 bottles to match the tickets they will hand out tonight.

Remember,  this is just the pre-game. Starting at 2 p.m. until 9 p.m., on Saturday, Nov. 7, the brewery will have the official GBS release party, with bottles and draft for sale. There will be music and food trucks on site. Click here for event info.

For those who want to catch the Gingerbread man, but don’t want to wait in line, you can expect to find it in stores very soon.

“It will head out starting early next week,” Shofner said, and they will be “distributing it to our entire distribution list.”

That’s an area that includes all of Virginia and D.C., parts of eastern Pennsylvania and Philadelphia.

“You will see it at more stores than last year,” Shofner said assuredly.

He suggested using the beer finder on their website to get the distribution locations. But, he warned, it doesn’t update daily, it updates based on what distributors have sent out – so find the retailer online and give them a call first.

He also suggested the local app Trinkin, because it is “good at updating [local] restaurants and shops carrying craft beer.“

“It was the fourth beer [Hardywood] made and when Beer Advocate gave it a perfect score, that brought intrigue,” he said.

It allowed Hardywood a big reach early on, “so it’s a huge part of why we have been able to stick around,” Shofner said.

The beer is a 9.2% ABV Imperial milk stout with freshly harvested ginger from Casselmonte Farm in Powhatan and wildflower honey from Bearer Farms in Louisa.

Hardywood Gingerbread Stout captures the terroir of central Virginia in a rich, creamy libation with a velvety mouthfeel and an intriguing evolution of flavors from milk chocolate and vanilla to honeycomb and cinnamon to a snap of ginger in the finish.

Deep, dark chocolate in color with a mahogany tint and a frothy, caramel colored head, Hardywood Gingerbread Stout offers aromatics of holidayspice originating from the ginger, and balanced with a generous dose of whole Madagascar bourbon vanilla beans and Vietnamese cinnamon. Milk sugar (lactose) contributes to the full body of this stout and tames its roasty character, while oats lend a silky quality. Enjoy fresh, or cellar for a special occasion

P.S. If you are interested in Kentucky Christmas Morning, it releases on 12/19. Think GBS aged in Kentucky bourbon barrels, and filtered through freshly cracked coffee beans.