Gecker or Sturtevant? See which one voters chose at the ballot box 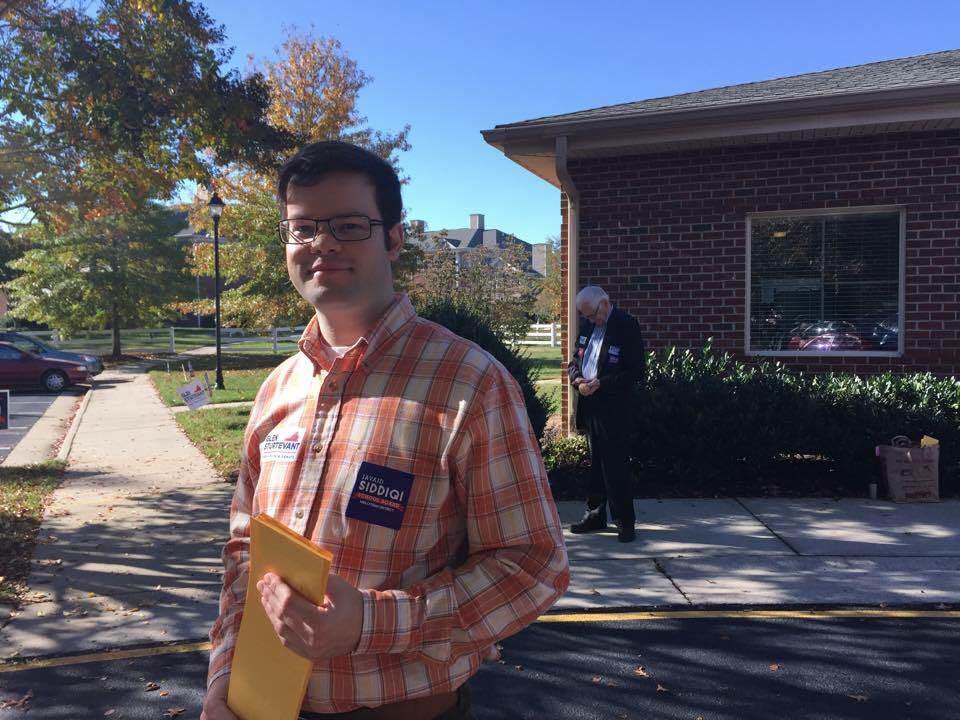 RICHMOND, Va. — Come Election Day Tuesday, all eyes were on the senate race in district 10 as Virginia voters headed to the polling stations. The outcome of the race between Democrat Dan Gecker and Republican Glen Sturtevant and the Independent and Libertarian challengers will decide the balance in the state senate and the future of the Medicaid expansion debate in Virginia.

Reporters of VCU’s “iPadJournos” project interviewed voters at the polls through the 10th district in the city of Richmond as well as in Chesterfield and Powhatan counties on their favorite candidates and their expectations for the election outcomes.

Read in the sections below how voters made their decisions at the ballot box on the 10th senatorial district and some of the other races in Central Virginia.

Signs for Dan Gecker and Del. Betsy Carr lined the sidewalk leading to the Clark Springs Elementary School entrance, one of the polling stations in the 10th district. But the numerous signs supporting Democratic candidates did not keep Virginia Union University adjunct professor Layton Lester, 62, from voting for Sturtevant. Lester said that he is not pleased with the direction the country has taken and thinks Sturtevant is a good leader who can help make the necessary changes.

On the other hand, VCU associate professor Jon Baker, 60, voted for Gecker and proudly displayed a sticker on his jacket. As an environmentalist and member of the Sierra Club, which has endorsed Gecker, Baker believes that he will offer a more balanced approach to environmental issues in the General Assembly.

Originally from England, VCU student Jessica McLean, 24, was excited to vote for the first time after becoming a U.S. citizen.

“Virginia has actually voted to not keep Medicaid funding from the federal government, which to me seems really crazy,” McLean said. “The way that politics is, it’s very much partisan, so hopefully we can have a little more balance in our state senate.”

“A lot of people pay attention to the presidential elections but your local senators, your local delegates, they have far more impact on your personal life than a lot of people realize,” Carino said.

By 8:30 a.m. on Tuesday, nearly 400 people had already cast their vote at the Bon Air Community Center polling station, according to volunteers stationed outside the building. And the polling place maintained a steady stream of voters throughout the morning.

Annie Ranson, 18, is a full-time student and voted for the first time. She chose Republicans, saying, “it runs in the family.” Deborah Ranson, 61, who accompanied Annie, said she as well was “Republican head to toe.”

Outside the polling station, voters discussed many issues including gun control, Medicaid expansion, Planned Parenthood funding, and taxation. And voters, like Joel Rothenberg, 70, had strong opinions.

Samantha Kittle, 31, said she voted Democrat, because she wants someone in office who cares about protecting women.

About 160 voters showed up to cast their ballot at Community Grace Church before 10 a.m. Most voters cited the open senate seat race in district 10 and education as their main motivations for voting in this election.

That is also what brought out volunteer Caleb Greene who said that he was “annoyed” by the negativity in the race, particularly from Gecker’s camp. He praised Sturtevant for running a cleaner campaign, but admitted all politics were negative in some manner.

John Page is a retiree, who also backed the Republican candidate. He said he was disturbed by recent trends in education. He claims most young people aren’t aware of basic political history like who was the first president of the United States.

“Teachers nowadays aren’t teaching, they’re just filling a void,” Page said. He said that he does not know if Republicans can reverse the trend, but voted for the party because he aligns with other issues.

Nicholas Mattia, a supporter of Democratic presidential candidate Bernie Sanders, has on opposite viewpoint. “I just want to keep Republicans out of office,” he said. And the Tea Party agenda, he added, “puts a bad taste in my mouth.”

Mattia said that the main reason for him getting to the polls was wanting to exercise his civil right to vote, He thinks that right should be extended to all people, including felons and those who are not natural born citizens.

University of Richmond professor Deborah Westin said voting is a “blessing” and in many of the countries she has visited women are restricted from engaging in the political process. She referred to America’s own past and how long it took to get women and African-Americans the right to vote. Education was her top concern at the ballot box.

Although Powhatan is part of the embattled 10th senate district, locals headed to the polls largely out of the desire to vote in local races. In Powhatan, offices from Sheriff to School Board were up for grabs on Tuesday, with voters heading to the polls at Company Number 1 and Powhatan Community Church.
“I’m voting for Teresa Dobbins for Powhatan Clerk of Court,” said Jim Doyle, a Powhatan retiree. “Because I’m also voting for a future daughter-in-law.”

India Cox, a local farmer, was surprised by the turnout. “It’s a beautiful day in Powhatan,” said Cox. “We’re going to have a good election.”

Despite a strong push from both the Gecker and Sturtevant campaigns hoping to win the support of Powhatan voters, one of the common sentiments shared by voters was disgust with how combative and omnipresent the race between the two has gotten. Many Powhatan residents were shocked by the amount of negativity surrounding the election.

Richard Harrelson, 52, said he was put off by the amount of hostility between candidates at the local level.

“I voted for Glen Sturtevant, but there seems to be a lot more vitreal on the local half of the election in Powhatan,” said Harrelson. “There’s a lot more mailings and things of that nature, that’s something I’ve never seen in the 15, 16 years I’ve lived here.”

Despite the negativity, Powhatan residents were quick to comment on how tight-knit the local community is and they stressed the importance of coming out to vote. Paul Sabbatini, a recent immigrant to the United States, voted only for the second time in his life.

“I’ve only been an American citizen for two years. Last year was the first year I ever voted, I had never voted before. We were in Africa and we weren’t allowed to vote,” said Sabbatini. “So, I feel it’s important to vote. ”

“The sheriff’s race has been intense,” said Kelly Price of Powhatan. “We have our undersheriff, Chris DeHart, and our 1st sergeant of the patrol division, Brad Nunnally, going against each other.”

With many local seats up for grabs this year, Powhatan experienced a slightly larger turnout than normal on Tuesday morning.

“Earlier this morning before people went to work, it was pretty busy,” said volunteer Dorothy Wilson. “We expect things to pick back up around lunch.”

Voters welcomed a recent change expressing their admiration for paper ballots instead of using machines to cast votes. In recent years, voters found many machines to be flawed. They would select their candidate and the machine would then inadvertently select the other candidate listed.

“I like the paper,” said Larry Nordvig, a district 2 board of supervisor candidate. “We had issues not too long ago in Virginia where voters would use their iPhones to take videos of them putting their finger on one candidate and the machine selecting the other candidate.”

Election Day also got off to an efficient start in Richmond’s Fan and Museum District Tuesday morning as voters trickled into Retreat Doctors’ Hospital to cast their ballot for an unopposed state senate seat in the 9th district and a seat in the House of Delegates for the 68th district.

Many voters were in a rush to get in and out on their way to work, so there was a sense of relief at the absence of lines or a long wait to get into the polling place.

Jessi Schmale, 28, said she was worried about the sparse voter turnout in her district.

“Making sure that especially young people remember that it’s important to get out and not just on the big elections, but on the smaller scale local stuff,” Schmale said. “I think it’s important because a lot of people think their voice is not heard, but when you don’t vote at all you’re not counted.”

The contest for the 68th District House of Delegates was pursued by all three parties — Manoli Loupassi is the incumbent Republican, Bill Grogan the Democratic and Michael Dickinson the Independent challenger. Democrat Donald McEachin (D-9th) was running unopposed for the senate seat.

Voters said they had a number of different issues in mind when they came to the poll. Eric Dobbs, 66, said the issue he is most concerned about is gerrymandering and he hoped Grogan would help to solve the problem if elected.

“I think it’s horrendous,” Dobbs said, “and totally undemocratic and almost treason in my opinion.”

Voters also voiced their opinions on the hot-button issue of Medicaid expansion in Virginia. Mary Colfer, 45, said the issue affects her daily in her job as a physician.

“I work with people that are underserved, so I worry about those people not getting access to care and I actually think it costs us more as citizens not to have insurance,” Colfer said.

Despite there being no issues on the ballot and only one competitive election, voters still thought it was important for them to make it out to cast their votes.
“If we don’t get enough people out to vote, we don’t have a democracy,” said 76-year-old Carleton Garrett.

Polls will be open until 7 p.m. on Tuesday. To determine your assigned polling station and find detailed information about the election process, visit the website of the Virginia Department of Elections.