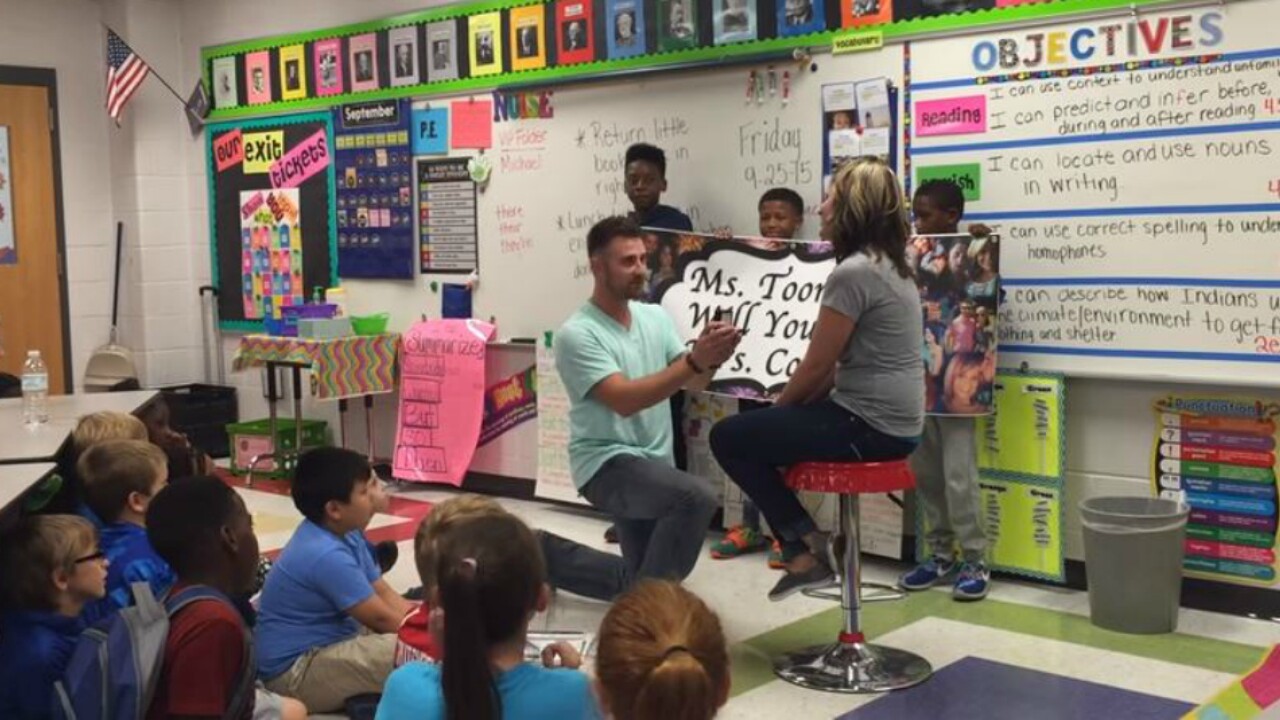 SOUTH BOSTON, Va. — A fourth grade teacher at South Boston Elementary School thought she was being called to the principal’s office for a review. Little did she know that while she was meeting with her boss, her boyfriend was using her students to plan a surprise marriage proposal.

Amanda Lynn Toombs, 27, said everyone in her school seemed to know what was going to happen. Everyone, but her.

“While meeting with the principal, he jumped up after five minutes and told me he had to go because a child was acting up and he had to go get him,” Toombs recalled. “We walked down the hall talking and agreeing to meet another time. He walked with me all the way to my classroom, as I am thinking ‘oh my goodness, my students are with a substitute, one of my kids are probably the one acting up.'”

Once inside the classroom, Toombs said she was surprised not only to see the entire fourth grade staff in her class, but teachers from other grades as well.

Justin pops the question in Amanda’s classroom. She said yes!

“I was dumbfounded, then I looked to the back to my room to notice both of my fiance’s brothers were back there, as well as one of their girlfriends. Then, I noticed a camera. As soon as I sat down, the video that was on my screen in my classroom came on,” she said. “Justin then came in after it was over with a banner that said ‘Miss Toombs, will you be Mrs. Coats?’ being held by three of my students that I had last year. These boys are very special to me and although they are in another grade this year, Justin wanted them to have a part in the proposal, also.”

Toombs said she was in total shock throughout the proposal video and remember her students were the quietest she ha even seen them.

“I didn’t know if Justin was going to pop out of a cabinet or where he was,” she said. “I didn’t know what to think or do, really, besides say YES!”

Amanda and Justin plan to get married in October 2016. They submitted their proposal video for a Diamonds Direct Honeymoon contest and have asked people to vote for them as the winner.