RICHMOND, Va. — More than 1,100 girls gathered at St. Catherine’s School last week for its first Girls Innovate event, which commemorated the school’s 125th anniversary and brought together students from nine area schools. During the event the students heard from six inspiring female speakers and Gov. Terry McAuliffe as well as saw a performance by traveling dance group iLuminate.

As part of the Girls Innovate program, the students took part in a group activity to encourage creativity and an interest in coding. The overall message of the program was to encourage young women to try new things, become entrepreneurs, and to never give up. 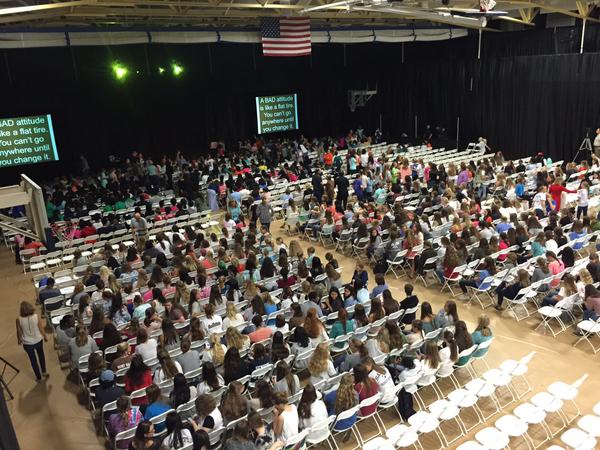 The event began at 9:30 a.m. and was hosted by creative consultant Courtney Ferrell.

“Today is the international day of the girl,” said creative consultant Courtney Ferrell, who hosted the event. Throughout the morning, Ferrell introduced a diverse group of speakers who possess different talents but share similar passions.

Megan Grassell, founder and CEO of Yellowberry, an age-appropriate lingerie company for younger girls, spoke about seeing a need for change and then finding a solution. Grassell, whose mother is a St. Catherine’s graduate, was only 17 when she founded her company after seeing the lack of selection in bras for her younger sister. Now 20 years old, she encouraged the young audience to pursue entrepreneurship despite any challenges or barriers they might encounter.

“Women are the future of not only the state of Virginia, but also our country,” said McAuliffe. He cited many jobs in engineering, cyber security, and other technology fields, and urged young women to take courses that will help them excel in these areas.

“Out of every 100 college graduates, only four have engineering degrees, and only one of those four are women,” said Dr. Rosalyn Hargraves of the VCU School of Engineering, who stressed the importance of engineering in every-day life.

Hargraves demonstrated the impact engineering has in everyday life by referring to common household appliances, smartphones and even the technology doctors use to treat patients.

“Without engineers, none of those things would exist,” said Hargraves.

Other speakers included Shiza Shahid, co-founder of the Malala Fund that is named after 2014 Nobel Peace Prize winner Malala Yousafzai and campaigns for the right of girls to attend school, as well as Danielle Feinberg, director of photography and lighting for Pixar.

“There are no superheroes, there’s just us,” Shahid told the group of girls.

Following the instructions given by Shahid, the girls placed their hands over their hearts and promised to change the world while also taking an oath of kindness.

After the presentations, the girls were also able to meet the speakers and get autographs and pictures.

Shiza Shahid signs autographs for a group of girls

Finally, everyone divided into teams and tried their hands at a creative exercise using littleBits technology, which challenged the girls to work together to create their own inventions from random parts using coding.

Kate Talley, a student at St. Catherine’s School, said that she found the program and the activity fun and exciting. “My favorite speaker was Shiza,” Talley said. “She’s really cool.”

“I think this is pretty awesome,” said Yulissa Macias of Boushall Middle School. “I don’t really see things like this where girls are empowered.”

St. Catherine’s Head of School Dr. Terrie Schecklhoff said that the Girls Innovate event was not a one time event, but a new culture that will encourage girls throughout their education.

Schecklhoff said she understands how important the lessons learned in middle school are to young girls.

“Middle school is a time where we know girls start to break away from STEM areas,” she said, referring to the subjects of science, technology, engineering and math.

“Innovation is a way of thinking,” said Schecklhoff. “This requires a cultural shift.”

By Brian Williams and Haley Beck (Special to WTVR.com)