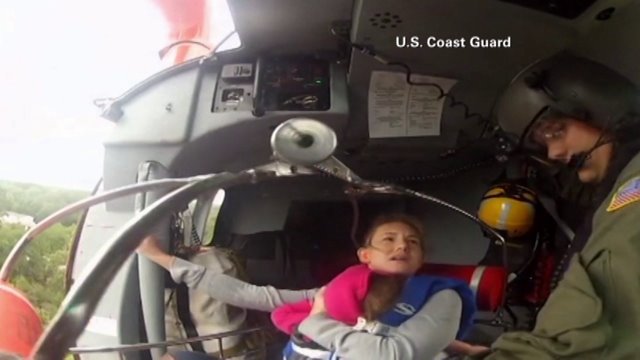 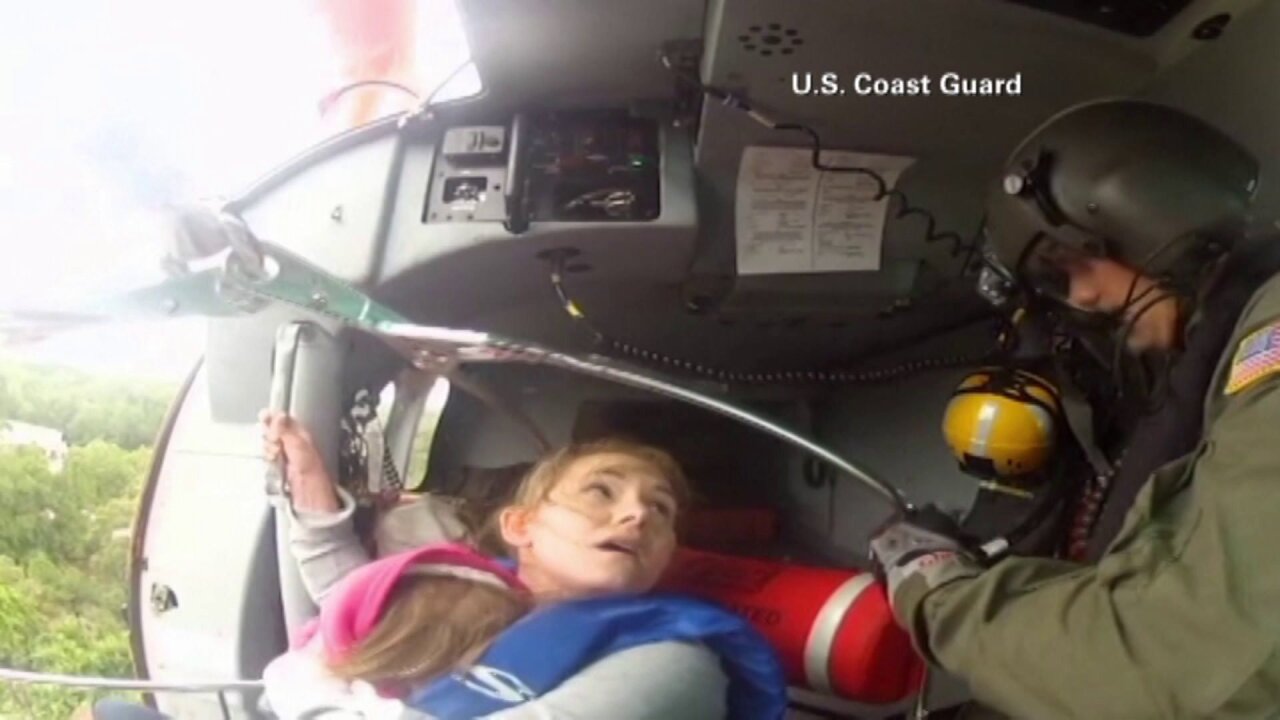 HUGER, South Carolina -- The U.S. Coast Guard rescued a mother and her 15-month-old baby from a flooded house in South Carolina over the weekend. The Defense Video & Imagery Distribution System provided the video recorded in Huger, South Carolina Sunday.

This is the kind of deluge that might happen only once every 1,000 years.

South Carolina is grappling with historic flooding that has led to several deaths, shut down interstates and sent search crews scrambling to rescue those trapped by rising waters.

"This is an incident we've never dealt with before," Gov. Nikki Haley said.

The hardest-hit swath of South Carolina stretches from the capital city of Columbia, right in the middle of the state, all the way to the coast, from Georgetown down to Charleston.

On Sunday, Columbia endured its rainiest day in history, according to the National Weather Service. And much of Charleston was pummeled by 2 feet of rainfall.

A "1,000-year rainfall" means that the amount of rainfall in South Carolina has a 1-in-1,000 chance of happening in any given year, CNN meteorologist Taylor Ward said.

And it's not over yet.

The National Weather Service forecast "catastrophic flash flooding" into Monday in Berkeley County, where more than 18 inches of rain had fallen in 24 hours.

"The problem is rivers are going to continue to rise for several more days," CNN meteorologist Tom Sater said.

'We have lost everything'

"We have lost everything. What I got on my body is what we have," she told CNN affiliate WIS. "Pretty much everybody down that hill there has lost everything ... our vehicles, our clothes, everything.

"But the best thing is that we still have our lives."

One was a state transportation employee.

Details of the five other weather-related deaths were not immediately available.

The state asked residents to:

Take the day off:

"The main reason for that is this is not going to clear up until at least Tuesday or Wednesday," the governor said.

More than 70 miles of Interstate 95 were closed late Sunday as floodwater spilled onto freeway lanes. And parts of all interstates leading out of the capital had to be shut down because of dangerous flooding.

"Regardless of where you are in the state, stay home," the governor said. "Stay off the roadways."

In Columbia, five hospitals could be evacuated because of water shortages, officials said.

Richland County Sheriff Leon Lott set a curfew for the county and city of Columbia from Sunday night until 6 a.m. Monday. The curfew will be re-evaluated Monday.

At night, "the conditions will become even more dangerous than what we have already experienced throughout the day," the Sheriff's Department said.

The National Weather Service issued a public service announcement video reminding people not to drive through water on streets, no matter how shallow it appears to be.

"Do not attempt to drive into flooded roadways," it said. "It takes just 12 inches of flowing water to carry off a small car. Turn around, don't drown."