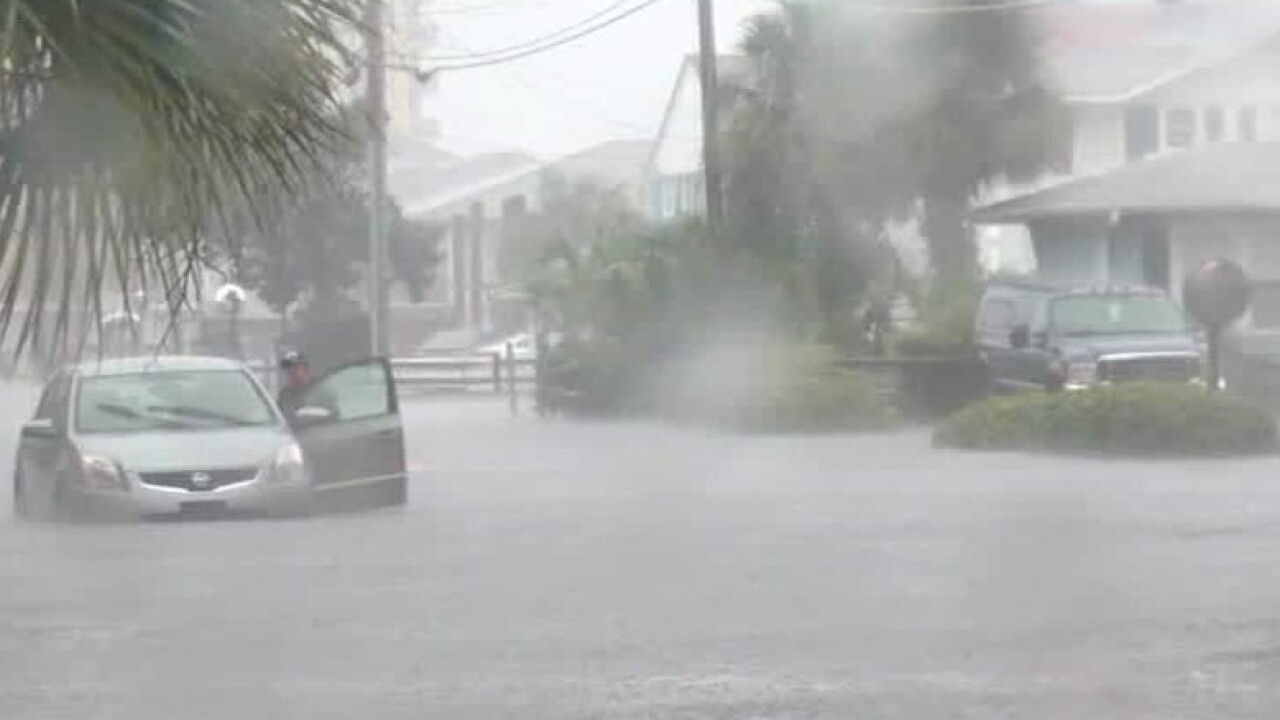 President Barack Obama has declared an emergency in South Carolina, authorizing federal aid in anticipation of rain tallies above 15 inches. More than 11 inches fell at Charleston’s airport on Saturday, and nearly that amount was expected to fall before the storm is gone.

A slow-moving storm has doused the area over the weekend and isn’t expected to let up through Monday, the weather service said, warning it will result in “potentially historic” rainfall.

The weather service forecast “catastrophic flash flooding” overnight into Monday in Berkeley County — where more than 18 inches of rain fell in 24 hours, according to CNN Weather Center — and in Charleston County. There, emergency workers from 18 agencies were inundated with 300 calls for help.

The situation is so extreme that the helpers are in need of help as well.

“Four additional swift-water rescue teams are coming in from out of state to assist with SC rescues,” the South Carolina Emergency Management Division tweeted.

Motorists are often the casualties in strong storms, and 8-10 inches of rain were predicted to fall over most of the state’s coast late Sunday through Monday.

Three people died on Friday and Saturday in traffic incidents in South Carolina, and a car passenger died in North Carolina on Thursday when a tree fell on Interstate 95, officials said. The deaths were blamed on the weather.

The weather service opened the extreme weather forecast on its website with a public service announcement video reminding people not to drive through rushing waters, no matter how shallow. “Do not attempt to drive into flooded roadways. Turn around, don’t drown,” it said.

“It takes just 12 inches of flowing water to carry off a small car; 18 to 24 inches for larger vehicles,” the video said.

In Dorchester County, South Carolina, where a flash flood emergency was already in effect, the county didn’t have sandbags for residents trying to shore up their doorways from rising waters.

“If water is entering your house and you feel unsafe, please evacuate to the county shelter,” emergency management tweeted. “Call 911 if you need help doing so.”

The water was still feet away from Joe Shetrom’s door overnight, but even that came as a surprise to him.

“When we built our house almost 3 years ago, I questioned if we really were in a flood zone. Now I know,” he tweeted along with a photo of the water creeping up his front yard.

“It is impossible to navigate the peninsula right now without a kayak or a monster truck,” she said.

“Having weathered plenty of hurricanes in the Out Islands of the Bahamas where my family lives and living in Charleston for 10 years, I have never seen rainfall like this,” she said.

In Charleston, people paddled kayaks and canoes down city thoroughfares, as more than 6 inches of rain fell in downtown on Saturday, according to the National Weather Service Twitter account.

There were 83 road closures throughout the state early Sunday with 46 of them in Charleston, said South Carolina Emergency Management spokesman Eric Rousey.

“What we’re experiencing is an unprecedented event,” said Mayor Joseph Riley Jr., referring to record rainfalls and extremely high tides happening at the same time, according to CNN affiliate WCBD.

The wet misery extends from Georgia to Delaware, and the weather service has issued flood watches up the coast. And it comes from two sources.

The low pressure area associated with the rain soaking the Carolinas is funneling a deep atmosphere river of tropical moisture into the region, creating the torrential rainfall, according to CNN Weather Center.

The moisture the storm is pulling in is also associated with Hurricane Joaquin, but the two systems shouldn’t be confused.

Joaquin weakened to category 3 strength early Sunday and was predicted to weaken further over the following 48 hours. It is inching north up the Atlantic but luckily away from U.S. shores and is expected push in a storm surge in the Northeast as it passes.

The two separate storms will result in a one-two water punch. And they are triggering more dangers than just rain.

As South Carolina residents hunkered down, up to 500 residents were evacuated in coastal Brunswick County, North Carolina, that state’s governor said.

A foot of rain could befall the Southern Appalachians. The Northeast could see two inches. And up to four inches could strike the waterfront between Georgia and New Jersey.

Flooding is a major concern for a number of reasons: directly from all the rains, indirectly from rivers and creeks possibly overflowing their banks, and also from storm surges fanned by strong winds.

Along with both Carolinas, New Jersey, and Virginia have declared states of emergency.