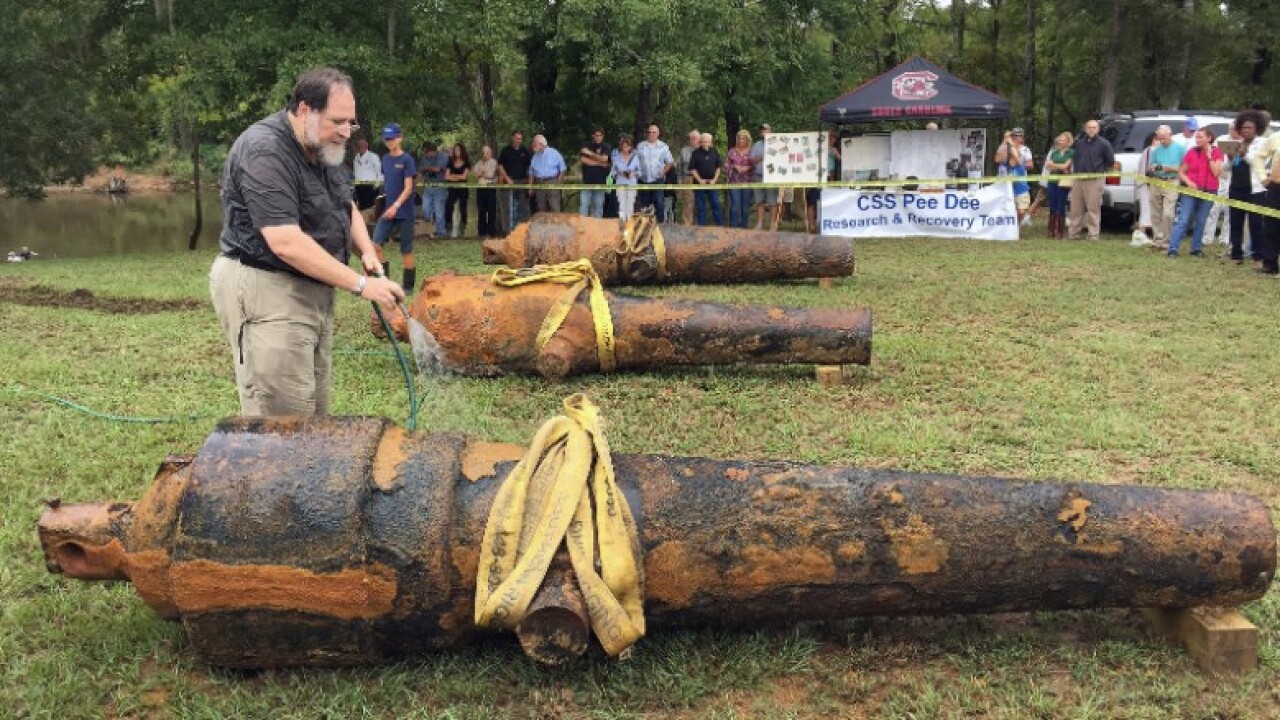 FLORENCE, South Carolina — Salvors who picked over a Civil War gunboat probably thought the cannons were with the rest of the wreckage in a South Carolina river. Instead, three mighty artillery pieces belonging to the CSS Pee Dee were back upstream. They had been thrown overboard by their Confederate crew, which didn’t want them to fall into enemy hands, before setting the boat on fire.

For 150 years, the cannons were burrowed in sand and mud that formed protective cocoons.

That isolation ended Tuesday when a team of University of South Carolina archaeologists used heavy equipment to raise 35,000 pounds of iron weaponry from the Pee Dee River.

They are headed to a lab for a couple years of conservation and, eventually, display at the U.S. Department of Veterans Affairs building in nearby Florence.

Researchers marvel at their condition. Spared the more corrosive effects if they had rested 150 years in saltwater, the cannons are in “fabulous” shape, said state archaeologist Jonathan Leader.

Foundry marks and stamps made by inspectors are clearly legible.

“This stuff looks like it was the day that it was put on,” said Leader.

The gunboat, which had been designed to roam the high seas and seize merchant vessels, had been involved in only one significant combat action — upstream at Cheraw, South Carolina, roughly 100 miles from the Atlantic. There’s some debate over whether it opened fire.

The fate of the CSS Pee Dee, which Leader termed “fast, powerful and deadly,” is similar to that of many other Confederate vessels in the waning months of the Civil War. Crews scuttled or set them on fire rather than allow approaching Yankee troops to get them. “It never fulfilled its promise,” he said.

The CSS Pee Dee’s 90-man crew in March 1865 heaved the three cannons overboard at its mooring and torched the vessel.

A 9-inch Dahlgren cannon, which had been recovered by the South from a sunken Union vessel, and two Brooke rifled cannons manufactured in Selma, Alabama, were “premier naval weapons of the Civil War,” said underwater archaeologist James Spirek.

They were mounted on carriages that could pivot 180 degrees “for a prodigious arc of fire,” officials said.

“The Dahlgren shot a round ball that would be fused that would blow up in five, 10 or 15 seconds. Those things would move,” said Spirek, who works for the university’s South Carolina Institute of Archaeology and Anthropology.

Interestingly, all three guns were loaded when they were jettisoned by the crew. The Brooke rifles had clusters of smaller shot that would have been deadly in close range against infantry or sailors trying to board a ship.

The discovery of the cannons a few years ago also brought to life the history of the Confederate naval yard at Mars Bluff.

“It is one of the farthest (shipyards) inland,” at nearly 100 miles, said Leader. “It was at the nexus of railroads and a lumber yard. It had an artisan group … It was a perfect mix of resources to get the job done. They built five boats.”

No contemporary photographs or drawings of the vessel survive, and records disagree even on the Pee Dee’s length. It may have been 150 feet long. The two propellers were previously recovered, as were other parts of the boat’s machinery.

One of the guns has a bit more corrosion because part of the muzzle was exposed to air when the river would go low.

The three are expected to arrive Wednesday at Clemson University’s Warren Lasch Conservation Center in North Charleston, home to the H.L Hunley, the first submarine to sink an enemy ship.

Stephanie Crette, director of the lab, said the conservation is expected to take about two years, as opposed to six years for cannons recovered from the famous Confederate raider CSS Alabama off Cherbourg, France. That’s because items found in a marine environment typically have encrusted sediment, known as concretion.

Experts will determine what solution will be needed to clean and prepare the guns for display. “They are going to be kept in freshwater the entire time,” said Crette.