UK bike manufacturer Brompton Bicycle has held races throughout the world since 2006, but this was its first race in Richmond and only its sixth in the U.S. The design of the Brompton folding bikes allows for easy storage, making the bike popular with commuters. Nate Prescott, marketing coordinator for Brompton, said that the bicycle’s popularity in the United States is only just starting to grow.

“It’s one of those heritage brands,” said Bill Strickland, editor for Bicycling magazine and one of the competitors in the Brompton World Championship, who thinks Brompton is on it’s way up.

“They were a little dorky for a while and then they made the brand more cool,” added Strickland, who brought up the popularity of Brompton with millennials by citing a hashtag called #straightoutofbrompton. 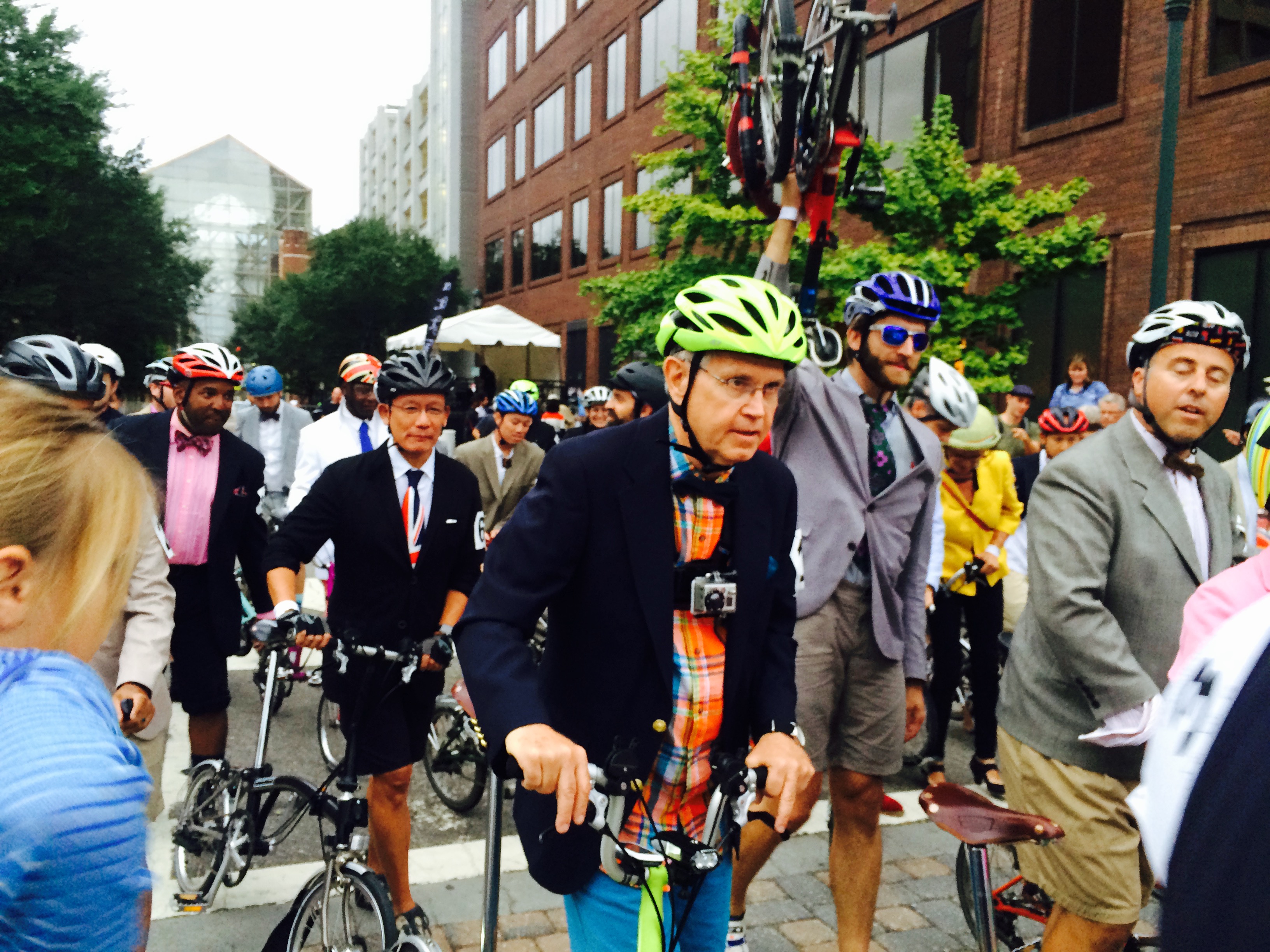 Ninety-five racers signed up for the event, of which more than 80 participated on Friday. Entrants did not have to be professional cyclists. The only requirement for race participation was the $60 entrance fee and a Brompton-branded folding bike. Most of the competitors, like Lesley-Alicia Delahunty, are avid Brompton fans.

“My bike’s a 2008”, said Delahunty, while her companion Timothy Seeley’s bike is two years old. “I converted him.”

Living in Washington, Delahunty took the bus Brompton organized to shuttle contestants from D.C. and New York City to Virginia. Richmond, she says, “is beautiful”, and the UCI races are a “definite plus, but we would have come if it was only a Brompton event”.

Cyclists are encouraged to dress up, with the majority donning full suits and skirts. David Journet, a French contestant who has lived in Richmond for four years, donned a maroon jacket that he complemented with a brightly feathered helmet. The winner of the event’s Best Dressed Female contest, Deborah Lance Pope, wore a coordinating red and black polka dotted skirt suit with matching heels and bonnet.

The race itself was a single 10-mile lap on the UCI race course, a challenging inner-city loop that moves through downtown Richmond with sharp curves and climbs up Libby Hill, 23rd Street and Governor Street. Long city stretches and cobblestone streets are some of the obstacles for both casual and professional bikers.

But before the cyclists could even cross the starting line, they had to run across the track and unfold their bikes. Fans enjoyed the unique start, shaking cowbells and rattling the metal dividers like it was one of the professional UCI races.

The weather proved to be a challenge for cyclists on Friday, as moderate winds and steady rainfall continued throughout the race. When cyclists reached the uphill, cobblestone section of the race, that rain became a serious safety hazard. An announcer at the finish line told the surrounding crowd that cyclists were “slipping and sliding” around the course with several cyclists getting off their bikes and walking.

Elspeth Huyett, winner of the fastest woman contest in the Brompton World Championship, also had to walk her bike up the wet cobblestone. Huyett had competed in Richmond before in the USA Cycling Collegiate Road National Championships in 2014.

Participants also had the additional challenge of sharing the road, as Conquer the Cobbles, another UCI cycling event for non-professionals, coincided with the Brompton race. Brompton cyclists’ full suits and smaller bikes were going up against the road bikes and cycling gear worn by Cobbles contestants.

Still, the first handful of cyclists to cross the finish line were riding Bromptons. Slower Brompton cyclists stayed on the left side of the track when Conquer the Cobbles’ participants passed them.

After completing the arduous course, Brompton cyclists were invited to a reception that was catered by local restaurant Mediterranean Bakery and Deli. It was held in a tent to the side of the track, where they were able to relax and watch the remaining cyclists finish their last rain-soak sprint to the finish.

After crossing the finish line, participant Brian Derro had even gained greater admiration for the professional UCI cyclists.

“I have a newfound, huge respect for them, it’s amazing what they do.” said Brian Derro. “We’re all almost dead after one lap and they do it, what for several hours.”

The fastest Brompton cyclists were given spoke-shaped medals and prizes, split between male, female and group categories. Third place winners Anna Zhao and Peter Yuskauskas were awarded Ortlieb bike bags, while runner-ups Julie Secor and Richard Spencer were given 2-night stays in any small luxury hotel of their choice.

Winners Elspeth Huyett and David MacKay were awarded flights to London, along with entry into the city’s Brompton World Championships next year.