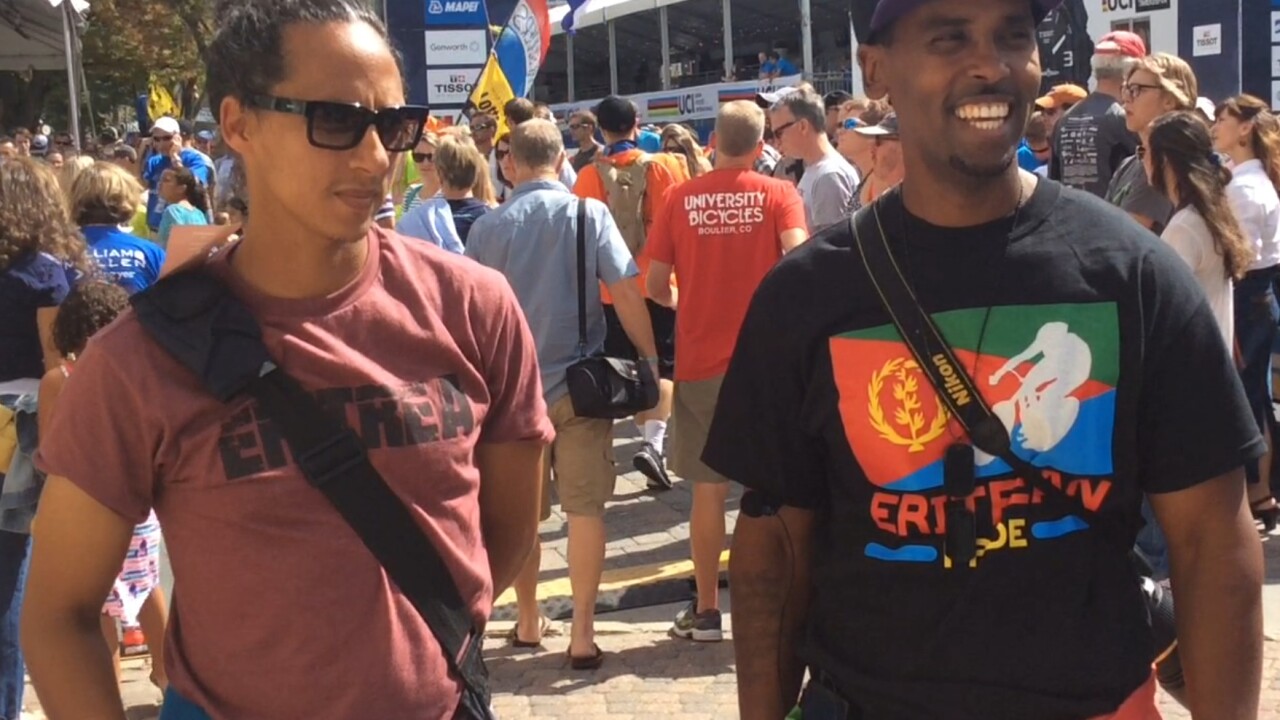 RICHMOND, Va. — With more than 70 countries represented this week at the UCI Road World Championships, international visitors and foreigners living in the U.S. could all be seen cheering on the sidelines at the downtown race course. And most of them praised the city’s welcoming atmosphere and Southern charm.

Please click on our interactive graphic to see biking fans and cyclists from around the world and what they think about Richmond.

Carmen Olay came to visit Richmond to support the Colombian cyclists. She enjoys not only supporting Colombia, but also the American team. In comparison to her hometown, she said Richmond is a lot more calm.

“It is very beautiful, very clean,” Olay said about Richmond. “And the people are very friendly.”

With an Eritrean shirt and hat and even the flag draped around his waist, Raesi Mahray obviously came to support his country.

“Actually to me it’s the same thing, there isn’t a lot of difference which is the reason why I’m here,” Mahray said about Richmond.

Although Mahray and his friend Simone Mariotti, who also wore an Eritrean shirt, live in the U.S., they came to support Eritrea, a country located on the eastern coast of Africa.

Although Diana Ramos lives in Georgia, she was born in Puerto Rico and was racing in the UCI Road Wolrd Championships for the U.S. territory. During her time in Richmond she said she has seen many beautiful historic monuments.

“The area has been very welcoming and it’s very put together,” Ramos said. “It’s really nice, [the people have] all been very helpful in directing us in where we need to go and the people around here are just all around welcoming people.”

Ramos also praised the number of coffee shops available in the city.

“Cyclists like that. We like to have a place to rest after we’ve ridden so hard,” Ramos said. “It’s just a very cute little community that I’ve enjoyed getting to know.”

Walden Franck is from Belgium and came to watch the bike races. Afterwards he plans to travel to Washington and explore the U.S. capitol. He said he enjoys America and how the people always smile.

“Belgium is good, but for me not good,” Franck said. “America is for me.”.

Polish cyclist Marcin Bialoblocki participated in the UCI Road World Championships and “everything has gone perfect” in regards to his visit. He said the weather was a lot nicer in Richmond than in Poland during this time.

“The biggest difference is, in Richmond the people are more happy, more relaxed and they [are] more open for everyone,” Bialoblocki said. “You can feel this difference. It’s nice here and it’s nice over there.”

This story was reported by the “iPadJournos” mobile and social media journalism project, a cooperation between WTVR.com and VCU’s Richard T. Robertson School of Media and Culture. Students from the project reported this story.