‘The girl who lived,’ gets Harry Potter tattoo after he signs her leg in Hopewell

HOPEWELL, Va. – One fan now has a permanent memento of the time she met Daniel Radcliffe in Hopewell, but the new tattoo of his signature on her leg is a reminder of a darker time.

Radcliffe’s fans in both Richmond and Hopewell have been excited to discover that the actor, described as “sweet and genuine,” is so open to autographs and pictures.

The former boy wizard known as Harry Potter is now playing an undercover FBI agent  in the indie movie “Imperium.” Filming began this past week in Hopewell – where most of it will be shot – and fans have been on Radcliffe watch since then. He has also been spotted around Richmond. 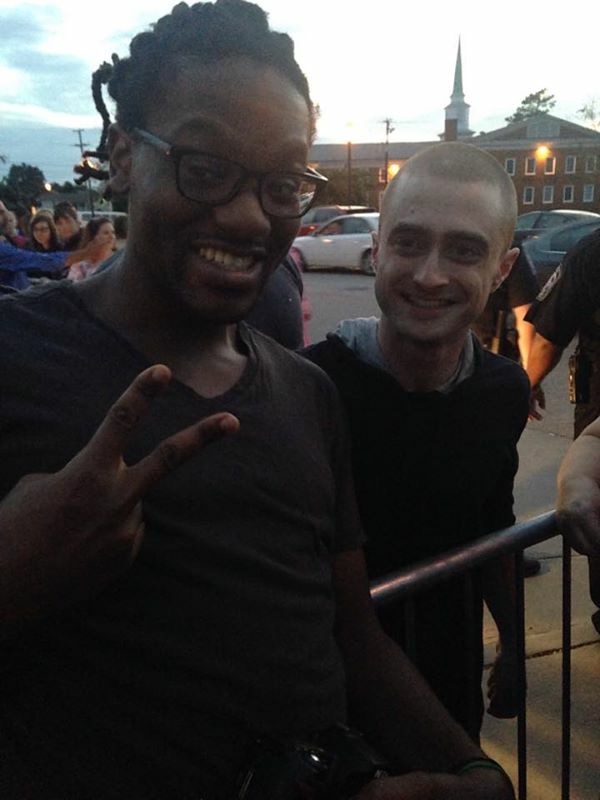 Fans have not been disappointed, because as it turns out, according to dad Shannon Martin, Radcliffe makes a “concerted effort to meet and greet, sign, photo with everyone.”

Prince George resident Sheri Bradshaw, said Radcliffe even signed her leg. She then immediately had his signature tattooed.

“The girl who lived,” can be read on the picture that Bradshaw shared with CBS 6. See, Harry Potter became one of the most famous wizards because as an infant he survived an attack by Lord Voldemort, though the attack left him with a lightning bolt shaped scar.

Sheri Bradshaw got Daniel Radcliffe’s autograph tattooed on her leg.

Although she has never squared off against Voldemort, Bradshaw did describe a fateful night when she almost died trying to save a wrecked and injured motorist along Interstate 95 South.

Bradshaw, who said she is a registered nurse who previously worked in the maternity department at WellPoint, said she was driving home on I-95 south, just before midnight on Sept. 27, 2012, near the Willis Road exit.

“I happened upon a car with the tail end smashed and butted up against the jersey wall median,” she said. “The front end of this car was also smashed.”

There was no one at the scene and she said as she tried to help him, a vehicle traveling around 70 m.p.h. slammed into them.

I expressed my concerns as his car was jutting out into the left hand lane and I knew that eventually a car would come along and hit it. I asked the young man to sit as 911 insisted, I stooped in front of him and reached out to stabilize his neck with the phone pinned between my shoulder and ear. No sooner than this the two young men still standing yelled “Look Out!!”. I turned and my worst fears were realized as I saw a van speeding towards us at lightening [sic] speed. The last thing I saw was glass from the vans windshield shattering as it collided with the initial young mans car…..then I woke up as my head smacked the pavement with such force it woke me up. I suspect the impact actually knocked me unconscious. I immediately thought “that’s a concussion”…sorry, nurse humor. I began to try to get up immediately to move as I could hear more cars continually colliding and coming towards me. But my left leg wouldn’t work. I looked down and my leg was soaked with blood. My dress pants were ripped close to the knee but in the inner thigh area. I could not look any longer. I had to think clearly and not panic though I knew in the back of my mind it was possible that my femoral artery could be severed and I wouldn’t have much time.

Bradshaw said that her leg was almost ripped in two and his legs were crushed. On the long road to recovery she was left with a lightning bolt shaped scar on the inside of her leg, similar to the one Harry had on his forehead, and always knew she would get a tattoo to commemorate surviving that night.

So many miracles. In what seemed an instant. We are all ok. We are alive! Thank God for that. We saved each other.

So on Wednesday, Sept. 23, knowing that Radcliffe was filming in Hopewell, she joined the other people in line.

The original autograph by Daniel Radcliffe. Photo by Sheri Bradshaw.

More people began to arrive and I met some awesome folks. A woman who has Cancer, going through chemo. I tried to shield her from the children…she is very vulnerable to infection/illness. I re met a girl I went to grade school with. A young man who had not been adopted once but twice….who brought some pretty hilarious cards against humanity cards with crude references to Harry Potter. A young school teacher and her two adorable children. We all waited in hopes to meet him. Then The buzz began, they were to wrap up filming around 6:30p and Daniel would go change clothes and come back to do autographs!!! OMG this is it!!!! Could I convince him to sign my leg? I know it would sound ridiculous….how would I say it? Would he??? We all had our stories. Why would mine be of particular interest? We waited….then he was there!!!! I was 5th or so down the line but right up front because I had been there for a few hours at this point. I just spat it out: mr. Radcliffe, please I know it sounds strange but I have a lightening bolt scar on my leg from a near fatal accident. Will you please sign “The Girl Who Lived” on my leg near the scar? He smiled so brilliantly and made a joke about getting it tattooed on..I said oh, I can’t? And he laughed and said no one ever asks and he stooped right down and signed it perfectly on my left lower leg along with his signature!!!! He stood up and I thanked him, I was in shock. I’m pretty sure I said I love You. Lol! And he smiled and I had to turn to leave as the crowd began to press in.

Bradshaw said she immediately called Tantrum Tattoos LLC in Petersburg and was able to make an appointment. Her tattoo guy Greg Aigner came in just to ink Radcliffe’s signature on her leg.

And that is the story of the girl who lived, to get a tattoo with Radcliffe’s autograph.

Radcliffe remains in Virginia for a couple of more weeks. The story line of “Imperium” is based on the experiences of FBI undercover agent Michael German, who worked within neo-Nazi and militia groups to stop white supremacists trying to make a dirty bomb.