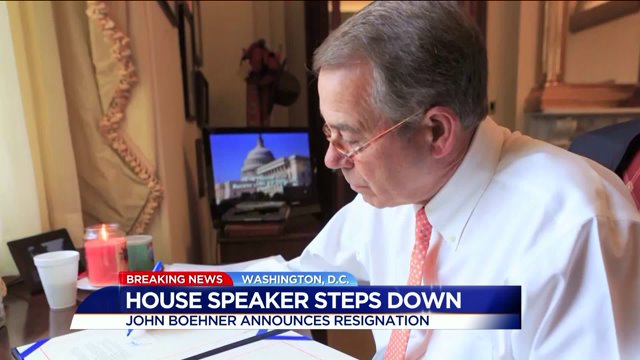 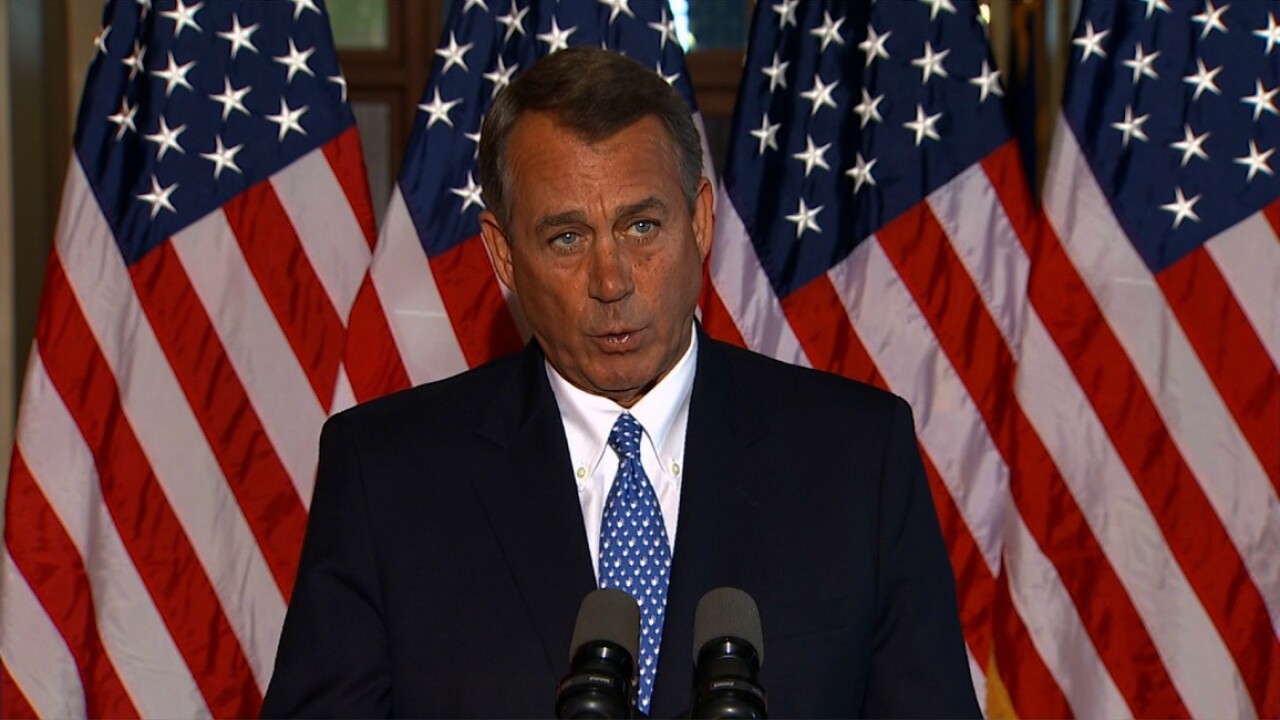 WASHINGTON -- John Boehner, the Ohio Republican who steered his party to an overwhelming House majority in 2010, told colleagues Friday he's stepping down as Speaker and will leave Congress at the end of October.

The abrupt decision comes after he faced heavy pressure from conservatives to take a harder line on their causes, most recently over defunding Planned Parenthood as part of a package that would keep the government open.

Boehner, who has presided over the House since 2011, explained during a closed-door meeting with Republicans Friday morning that he had only planned to serve two terms as speaker but decided to hold onto his post after then-House Majority Leader Eric Cantor lost his seat during a primary last year, a Republican lawmaker in the room told CNN.

Boehner, who will speak at a 1 p.m. news conference, also told the lawmakers that Pope Francis' visit to Congress the day before was a crystallizing moment, according to the lawmaker. Boehner then read the prayer of St. Francis to the conference after announcing his decision.

The Ohio Republican's tenure as speaker has been marked by clashes with conservatives -- especially when it comes to fiscal policy. He's struggled to push through legislation to increase the debt ceiling and was facing another showdown next week to keep the government open. The speaker has often relied on Democratic votes during these moments -- a strategy that has infuriated conservatives.

Boehner said in a statement late Friday morning that he was "full of gratitude" to his colleagues and constituents and said he is "proud" of the Republican majority's accomplishments under his leadership.

But he also pointed to turmoil within his caucus as the reason for his resignation.

"It is my view, however, that prolonged leadership turmoil would do irreparable damage to the institution," Boehner wrote in his first comments since the announcement. "To that end, I will resign the Speakership and my seat in Congress on October 30."

Boehner said that he had planned to only serve as Speaker until the end of last year, but stayed on in the top post "to provide continuity" -- a nod to Cantor's defeat.

A Republican source close to Boehner said the announcement "was not some big orchestrated move," explaining that Boehner informed only his most senior aides Thursday night of his decision.

"After yesterday with the Pope, he decided to leave on this high note," a top Boehner aide told CNN. "Literally did not make the decision til last night."

House Minority Leader Nancy Pelosi called Boehner's resignation "seismic for the House" and called it evidence of the far right's "hijacking" of the Republican Party. And she said the squabble to succeed Boehner will be "more than a distraction" to efforts to resolve the latest funding battle roiling the Hill.

"That resignation of the Speaker is a stark indication of the disarray of the House Republicans," Pelosi said during a Friday morning press conference.

Pelosi said she had not yet spoken with Boehner, but affirmed that she planned to continue negotiating directly with him to achieve her goal of funding Planned Parenthood.

Senate Minority Leader Harry Reid tweeted similarly that the ouster of "a good man like Speaker Boehner -- someone who understood the art of compromise" showed that "the party of Eisenhower and Reagan is no more."

Senate Majority Leader Mitch McConnell also lamented Boehner's resignation, saying it is "very, very sad" that the tea party has "taken over control of the party."

"John Boehner, he ... is a conservative Republican, but his problem is that John Boehner has been pragmatic. He realizes that there come times when you have to make a deal," McConnell said, before pointing out that Reagan also "understood the art of compromise."

Boehner and McConnell have not always seen eye to eye as Boehner wrestled with hardline conservatives in his caucus, but McConnell said that throughout those disagreements, Boehner "never, ever misled me.

The vacancy leaves the party scrambling to find a successor.

House Majority Leader Kevin McCarthy, the No. 2 Republican who could succeed Boehner, praised the Speaker as "a true statesmen" in a statement Friday morning and called on the Republican caucus "to focus on healing and unifying."

"John has been a leader, mentor, and most of all friend throughout, and I learned not only from his experience but also from his unshakeable faith and principles. It takes profound humility to step down from a position of power, and John's depth of character is unmatched," McCarthy said.

Rep. Paul Ryan, the House Ways and Means Committee chairman who was the party's vice presidential nominee in 2012, isn't planning to run for the seat at this time, according to an aide.

Rep. Raul Labrador, a favorite of conservatives who ran unsuccessfully for majority leader in January, declined to say if he would run for speaker.

Rep. Tim Huelskamp, who claimed in January that he lost his Agriculture Committee seat after voting against Boehner for another term as Speaker, said he and other tea party Republicans were jubilant at the news of Boehner's resignation.

"The establishment lost today," he said.

He bluntly claimed the speaker was pushed out by a simmering revolt among hardline conservatives, particularly those who Boehner had punished and tried to defeat in their re-elections last year.

"He read the writing on the wall," Huelskamp said. "We need new leadership. Every time we go home we hear, 'Fire Boehner.' We need a new speaker who can standup to the president."

Asked who will run to succeed Boehner in the top post, Huelskamp had just one answer: "Everybody!"

But he added hardline conservatives, often splintered, would agree on a candidate together and not offer any early endorsements.

'I got choked up'

Ohio GOP Rep. Steve Chabot ‎called the mood in the room "somber" during Boehner's announcement and said there were tears from the Speaker and other lawmakers.

"I got choked up," Chabot said.

Boehner's decision came as a shock to many, with his top deputy House Majority Leader Kevin McCarthy finding out moments before his announcement. McCarthy, a California Republican, is a top candidate to succeed Boehner.

Rep. Greg Walden, a member of Boehner's House leadership, said he had no idea Boehner would announce his resignation this morning and called it a "terrible loss for the party."

Walden said he wondered what the Pope told Boehner that may have affected his decision: "I don't know if this was a message from God but I wish he sent a different message."

The Speaker has survived many challenges to his position. He was facing another threat after Rep. Mark Meadows, a conservative North Carolina Republican, offered a resolution before the August recess to "vacate the chair," a rarely invoked move that would have stripped Boehner of the Speaker's gavel if it passed.

Meadows told reporters on Friday he would not run to succeed Boehner.

"Yesterday John Boehner was Speaker of the House," Sen. Ted Cruz said at the Values Voter summit Friday. "Y'all come to town and somehow that changes. My only request is can you come more often?"

Former Pennsyvania Sen. Rick Santorum, another GOP presidential candidate, told attendees at the summit that it was time for Boehner to step down, claiming that Boehner had "changed a bit" during his time in Washington.

"It's probably time for him to have stepped down to start a new chapter here in Washington, D.C.," Santorum said.

Sen. Rand Paul echoed that message during a campaign stop in New Hampshire calling Boehner's resignation "a step in the right direction."

"John Boehner dedicated his life to public service. Bringing the Holy Father to Congress was a fitting cap to a great career," said Bush, the former governor of Florida.

Republican National Committee Chairman Reince Priebus also praised Boehner, thanking him "for his efforts to make our party, the state of Ohio, and our nation stronger."

"He has been a tireless advocate for conservative principles who has raised millions to elect and re-elect Republicans to the House of Representatives. Our party owes him a great debt," Priebus said in a statement.

The House Speaker is third in line for the presidency after Vice President Joe Biden.