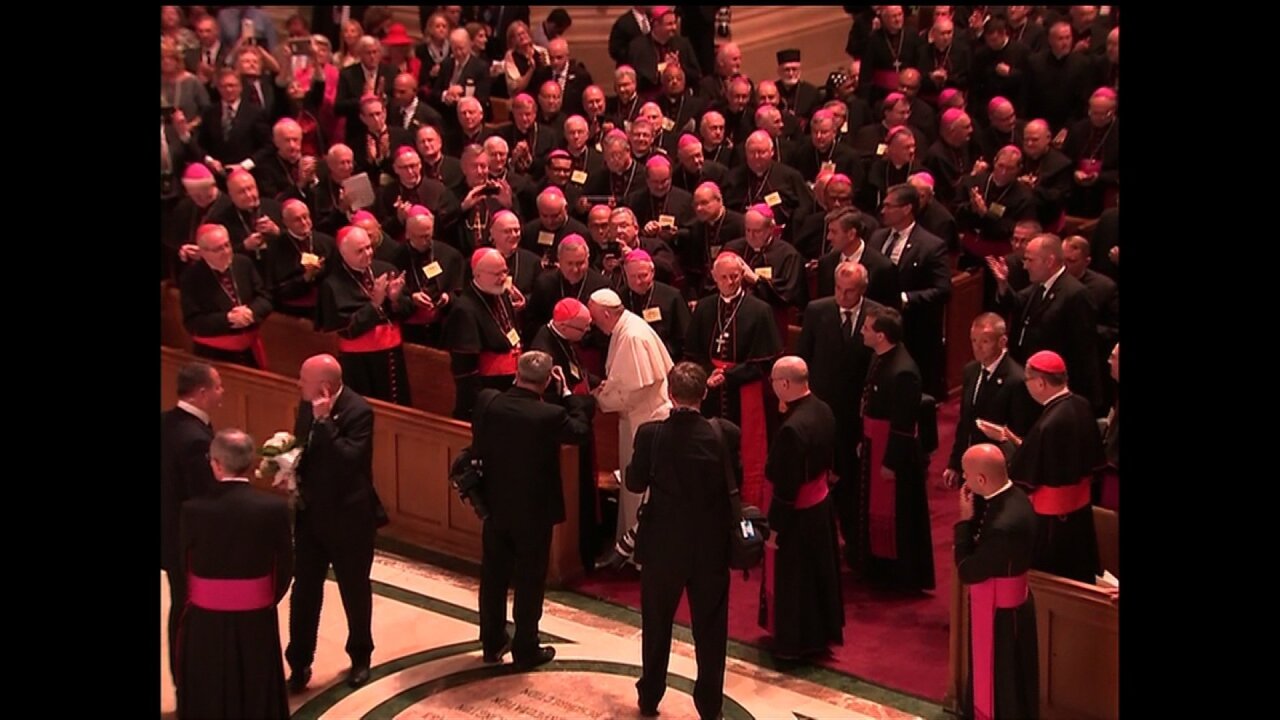 They may be embattled by the culture wars and bruised by the clergy sexual abuse scandal, but American bishops should not stoop to self-pity or harsh responses, Pope Francis said Wednesday.

It was the Pope’s first full day in the United States, but he made it clear, in a speech to 300 bishops in Washington, that he knows the strains his American church is under.

Millions of Catholics have fled the flock, leaving for other religions or for no religion at all. Meanwhile, the Catholic bishops have fought — and largely lost — public battles over same-sex marriage and abortion.

Referring to the clergy sexual abuse scandal, which harmed thousands of children and cost the church billions in legal settlements, Francis praised the bishops’ “courage.”

“I know how much the wounds of these last few years have weighed on your spirit, and I have supported your generous commitment to bring healing to victims — in the knowledge that in healing we too are healed — and to work to ensure that such crimes will never be repeated.”

But advocates for victims of clergy sexual abuse called the bishops anything but courageous.

“Almost without exception, they have shown cowardice and callousness and continue to do so now,” said Barbara Dorris of the Survivors Network of Those Abused by Priests.

“They offer excuses, exploit legal technicalities and hide behind expensive lawyers and public relations professionals, hardly the marks of courage.”

Earlier, Bishop Christopher Coyne told CNN he expected the Pope to meet with sex abuse victims when he travels to Philadelphia.

Francis, the first Pope from Latin America, also thanked the bishops for welcoming and caring for thousands of immigrants in their diocese, saying such charity struck a personal note for him.

“Now you are facing this stream of Latin immigration which affects so many of your dioceses. Not only as the bishop of Rome, but also as a pastor coming from the south, I feel the need to thank and to encourage you,” he said.

“Perhaps it will not be easy for you to read their soul; perhaps you will be tested by their diversity,” Francis added. “But rest assured and keep in mind they also possess resources meant to be shared. And so open your arms and welcome them without fear.”

The Pope addressed immigration earlier Wednesday in a speech at the White House.

Francis, who is in the United States through Sunday, said he did not have a specific plan in mind for the bishops to rejuvenate their ailing church. But he did have plenty of advice.

Here are his top suggestions for the American bishops:

1. “It is not about preaching complicated doctrines, but joyfully proclaiming Christ who died and rose for our sake.”

2. “Certainly it helps for a bishop to have the farsightedness of a leader and the shrewdness of an administrator, but we fall into hopeless decline whenever we confuse the power of strength with the strength of that powerlessness with which God has redeemed us.”

3. “I know full well that you face many challenges, that the field in which you sow is unyielding and that there is always the temptation to give in to fear, to lick one’s wounds, to think back on bygone times and to devise harsh responses to fierce opposition.

“And yet we are promoters of the culture of encounter.”

4. “Harsh and divisive language does not befit the tongue of a pastor, it has no place in his heart; although it may momentarily seem to win the day, only the enduring allure of goodness and love remains truly convincing.”

5. “The innocent victim of abortion, children who die of hunger or from bombings, immigrants who drown in the search for a better tomorrow, the elderly or the sick who are considered a burden, the victims of terrorism, wars, violence and drug trafficking, the environment devastated by man’s predatory relationship with nature — at stake in all of this is the gift of God, of which we are noble stewards but not masters. It is wrong, then, to look the other way or to remain silent.”

6. “To this end, it is important that the church in the United States also be a humble hearth, attracting men and women through the attractive light and warmth of love.”

7. “I urge you, then, not to let (priests) be content with half-measures. Find ways to encourage their spiritual growth, lest they yield to the temptation to become notaries and bureaucrats.”

Will the bishops heed the advice? At least one said he took the Pope’s message straight to heart.

“It made me know that I should live the life of faith a lot more faithfully myself in order to lead,” said Bishop William Patrick Callahan of La Crosse, Wisconsin.