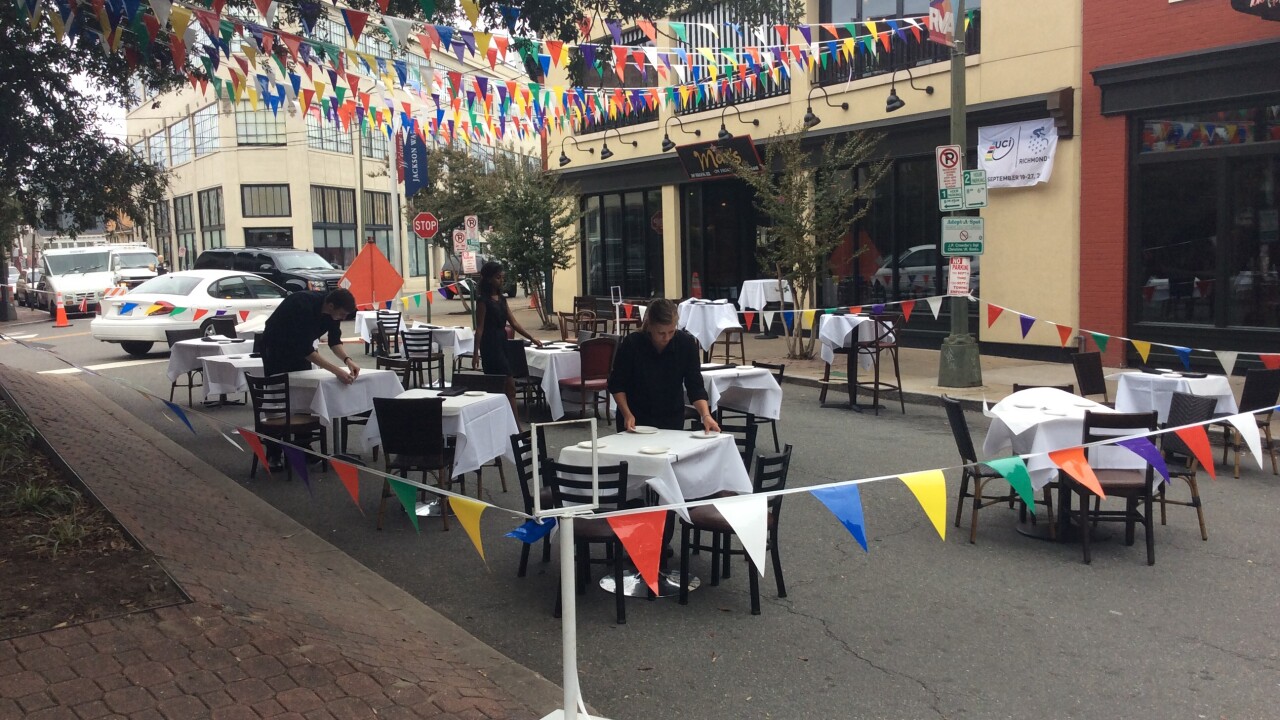 RICHMOND, Va. — Many of Richmond’s restaurant and bar owners say the UCI Road World Championships have been a “change of pace” for them, but not in the way they had expected.

“We had a 20 to 25 percent drop-off in what our normal sales would be this time of year,” said Kevin Wilson, managing partner of Sticky Rice Togogo on West Main Street. “This was the worst three-day weekend we have had in four or five weeks.”

Other restaurant owners and workers across the city echoed similar sentiments.

“We have six restaurants, and the five that are in the city — Pearl Raw Bar, The Daily, The Hard Shell downtown, The Hill Cafe, and Water Coastal Kitchen — are down in sales significantly,” said Jared Golden, owner of the Richmond Restaurant Group. “But, the Hard Shell in Chesterfield is actually up.”

Despite a noticeable influx of tourists and spectators, a bigger blow to local restaurants might simply be that local residents, avoiding the expected road closures and congestion, are simply putting off trips to the city.

“For (the race) to be good for business, you have to have to get your base business and then you expect extra from the influx of tourists,” said Paul Kincaid, a manager at Can Can Brasserie in Carytown. “We’ve found our base is just not coming out … We took a lot of cancellations from people realizing the bike race was happening.”

But Kincaid doesn’t fault the city as he is blaming overreactions concerning the city’s perceived congestion instead.

“In the end, the city did a good job organizing and making people aware of the road closures,” Kincaid said. “But, people just thought that it was going to be a lot harder to navigate.”

VCU students are noticeably absent as well. Given the week off by the university, many have ventured away from the area for the duration of the race.

“To have all the students not in town and the tourists not arriving, combined with a lot of people in the county thinking all the roads would be closed, it’s really turned Richmond into a ghost town,” Wilson said.

Despite the general downturn for restaurants in the city, some have seen success implementing creative plans as a means of attracting race fans.

“We got a permit to close off Brook Road, which is the street right in front of us, and we are allowed to serve alcohol there where we have a patio set up,” said Ellen Bucher, general manager of Max’s on Broad. “It’s a perfect spot to see every cyclist go by, and you can have a beer while you watch.”

Preparing for what was supposed to be a “busier than normal” week, restaurants around the city took steps to prepare for the anticipated flood of customers. To this point, though, with the expected crowds nowhere to be found, they’re beginning to scale back down.

“I think we’re going to start paring back down to business as usual,” Kincaid said. “We had all this extra staff in, hoping for a great day, and yet we did about a third of the business that we normally do.”

Even for Max’s, the positives don’t necessarily outweigh the negatives.

“If we didn’t have our patio out there we’d be dreadfully slow,” Bucher said. “This weekend has been slower than usual, but it’s progressively getting busier each day … we added more staff and ordered more than the usual amount of food from our suppliers, so hopefully we can sell it all before everything goes bad.”

By CJ Paschall and Bryant Drayton (Special to WTVR.com)