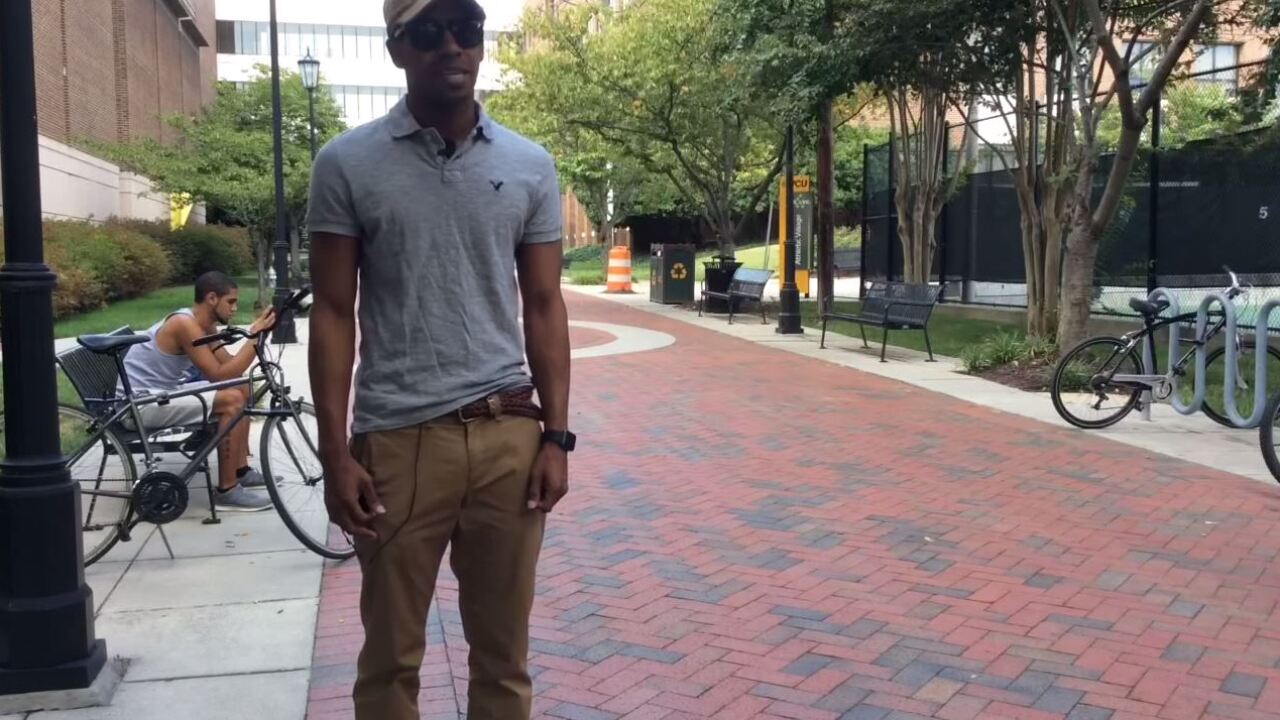 RICHMOND, Va. — One step after the other will lead most people across VCU’s temporary black and yellow pedestrian bridges in order to cross West Main and Franklin streets during the UCI Road World Championships this week. But Antoine Craig, a VCU student living with retinitis pigmentosa, a condition through which the eyes are no longer able to receive light and that causes extreme tunnel vision, doesn’t find crossing the street during the race an easy task to do.

“I really don’t want to be trapped in my apartment the whole time, so it creates a little bit of anxiety,” Craig said. “I wish there was a better way for the entities to control these types of decisions, to reach out to people with disabilities and include them in the decision making [process]. They made so many ramps to cross the street but I don’t think they really thought about ADA or people with disabilities at all.”

Craig, who planned to stay for a few days during the bike race, said the communication between VCU and students with disabilities needed to improving.

“Those accommodations were not made aware to us, so it’s going to be hard to figure out what they are, so maybe that’s part of the accommodations they need to have is just reaching out to the communities and let us know what options are available to us,” Craig said.

Most of the time, Craig depends on the transportation provided by VCU such as RamRide to get around.

Along with the intercampus buses, a new service called Handi-Ride will be operating during the bike race, said Paula L McMahon, the Americans with Disabilities Act (ADA) Coordinator at VCU.

“We’re doing this in collaboration with RamSafe to ensure that people are able to get from their parking lots onto each campus in a timely manner,” McMahon said. “They’re not looking about specific locations that you have to get to, the idea is they will come to you and then bring you on to the campuses.”

McMahon said VCU is “proactively engaged” in addressing accessibility issues for all members and all constituents of the VCU Community.

Some members of the community, like wheelchair user Jenson Larrimore, prefer to be independent when figuring out how to get in and around campus.

Larrimore, who was confronted with accessibility issues when arriving at VCU in 2012, started an organization on campus dedicated to disability advocacy.

“This campus is not an accessible campus, that’s part of our initiative in creating a petition to take to city hall to replace, repave the sidewalks surrounding the VCU campus so that the campus and the community is more safe and inclusive and accessible for everyone, not just people with disabilities,” Larrimore said.

While Handi-Ride will be for VCU student use, GRTC’s CARE Transit Service will remain active for residents during the bike race. Carrie Rose Pace, public Relations manager at GRTC, described CARE as curb-to-curb transportation which is provided in compliance with the Americans with Disabilities Act.

“We have a number of customers that work downtown and obviously that’s the biggest activity area with the bike race,” Rose Pace said. “There are medical facilities, dialysis centers, hospitals, MCV at VCU is right on the route.”

Transportation with CARE is $3, while CARE Plus for residents who travel to the outskirts of Richmond is $6.

“The most important changes that we’ve experienced with CARE and our regular destinations is that we are encouraging people to make for extra time when they are making reservations,” Rose Pace said.

Though trips may take a longer time, Rose Pace said that CARE vans will be able get through and around any closures with the help from the Richmond Police Department.

Rose Pace said GRTC started notifying passengers about the bike race and need for early departures during the race in August. With numerous visitors in the city, Rose Pace said if any are eligible under the ADA, reservations should be made at least two days in advance for CARE.