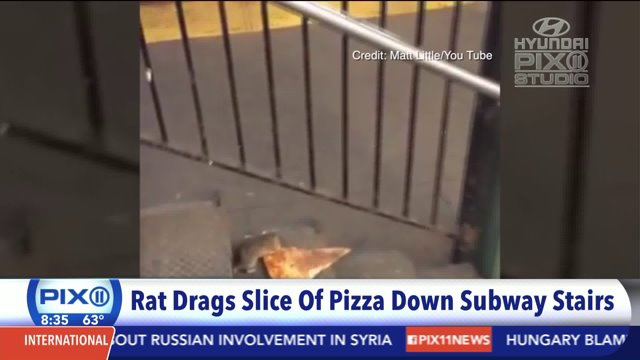 NEW YORK — A New York City rat refused to leave a slice of pizza behind. And can you blame the little guy?

The internet is losing its mind over a YouTube video showing a rat, using all of its might, to drag a perfectly good pizza slice down the subway stairs.

Comedian Matt Little was able to capture pizza rat in all its glory at the First Avenue subway station.

LINK IN BIO - Master Splinter headed off to feed #TMNT

In just three hours, #pizzarat was a trending topic on Facebook and Twitter, becoming a top news story.

let's be honest, #PizzaRat is living the life we all wish we led.

A plane could disappear right now and no one would write about it because Media Twitter is dedicated to #pizzarat.

A Twitter handle <a href="https://twitter.com/NYCPizzaRat">@NYCPizzaRat</a> was even created in honor of the rat.

Wasn't trying to make a statement, humans. Just trying to get some damn pizza down some subway stairs.

The furry creature embodied what New Yorkers found themselves doing at some point of their lives, desperate to get to-go pizza down their throat.

The rat wasn't able to get the whole slice down the stairs, but seemed to go back for a second try. No word on how the pizza struggles panned out, but the world is rooting for pizza rat.