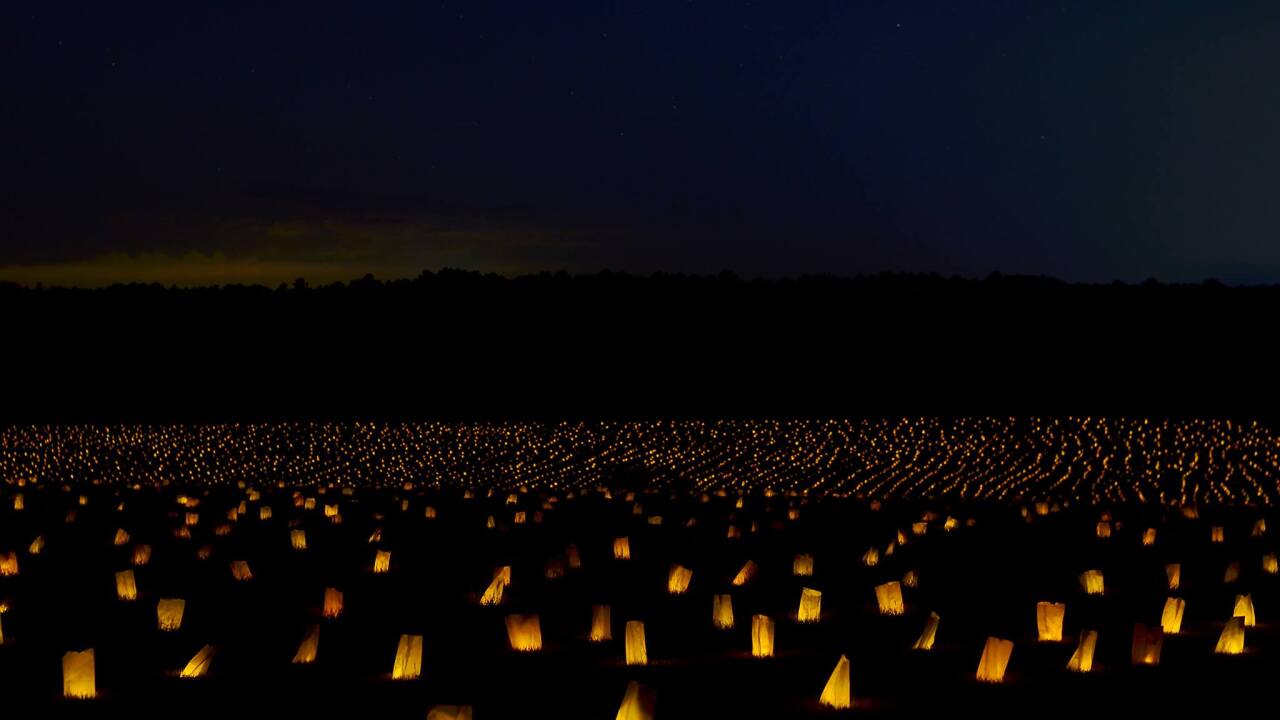 A simple wooden casket, placed on a raised bier, bore witness for thousands of Civil War soldiers who died while under the guard of fellow Americans.

Battlefields were the places for winners and losers. But survival was the only matter of magnitude at prisons in the North and South, the audience was told Saturday afternoon during the “Funeral for 13,000” at a national cemetery in southwest Georgia.

The juxtaposition of yesterday and today was apparent from the beginning of the memorial service at Andersonville National Historic Site: A bagpiper playing “Going Home” led a horse-drawn caisson carrying the ceremonial casket. Sheriff’s deputies and members of the armed forces walked in the procession toward the cemetery rostrum. Among those in the crowd were men and women portraying Civil War soldiers and civilians. One woman wore a black mourning dress and veil.

Despite the somber mood, there was a prevailing note of appreciation for the sacrifice of those who died at Andersonville and other prisons.

“It’s a great day to be a soldier,” said Sergeant Major of the Army Daniel A. Dailey, referring to the role uniformed men played in the forging of a great nation through a bloody civil war that cost more than 600,000 lives.

Events planned through Sunday at Andersonville are the culmination of the site’s sesquicentennial observance of an often-overlooked aspect of the war: Away from the battles that are famous today — Gettysburg, Antietam, Shiloh — thousands of prisoners endured wretched conditions. At Andersonville alone, nearly 13,000 Federal soldiers and civilian captives died over 14 months. Officials wanted those who died there 150 years ago to finally receive a proper, reverent funeral.

The observance coincided with the annual National POW/MIA Recognition Day.

Dailey, in an address carried nationally by C-SPAN, praised descendants for keeping alive the stories of prisoners.

He told the story of Sgt. Christian Kephart, a father of four girls who enlisted with the 13th Pennsylvania Cavalry in 1863. Kephart survived Andersonville but died of dysentery at another camp.

No one knows why he enlisted. Was it for an enlistment bounty? To save the country? End slavery?

Only about 1% of Americans serve in the military today. Dailey referenced the POW/MIA flag flying above the cemetery. Since the Civil War, he said, the United States has learned to provide humane treatment for prisoners, including enemy combatants.

Speakers reminded Americans of the ordeals soldiers went through. And they prayed to the creator.

“Here at Andersonville, we are suffering from what we have forgotten,” said Judson Mitcham, poet laureate of Georgia. “Tell us again how to praise and grieve and witness. Give us this day, forgive us our trespasses.”

Officials hope that visitors don’t see the weekend events just as a history lesson. There are larger questions of how soldiers transition to civilian life. How a nation binds its wounds after war and tells the story of those who were held captive in all wars.

Eric Leonard, former chief of interpretation at Andersonville, told C-SPAN that the number of Civil War prisoners proliferated after an exchange system broke down, partially because the Confederate government would not agree to exchange African-American captives.

At first, many prisoners that were moved by train from Virginia to Andersonville believed that conditions would be better. But the stockade’s main stream quickly became polluted. Officials had no real understanding of how germs and disease spread. They channeled water to create a latrine, hoping the flow of the creek would “flush” the toilet.

“They … completed the perfect breeding ground for dysentery,” Leonard said.